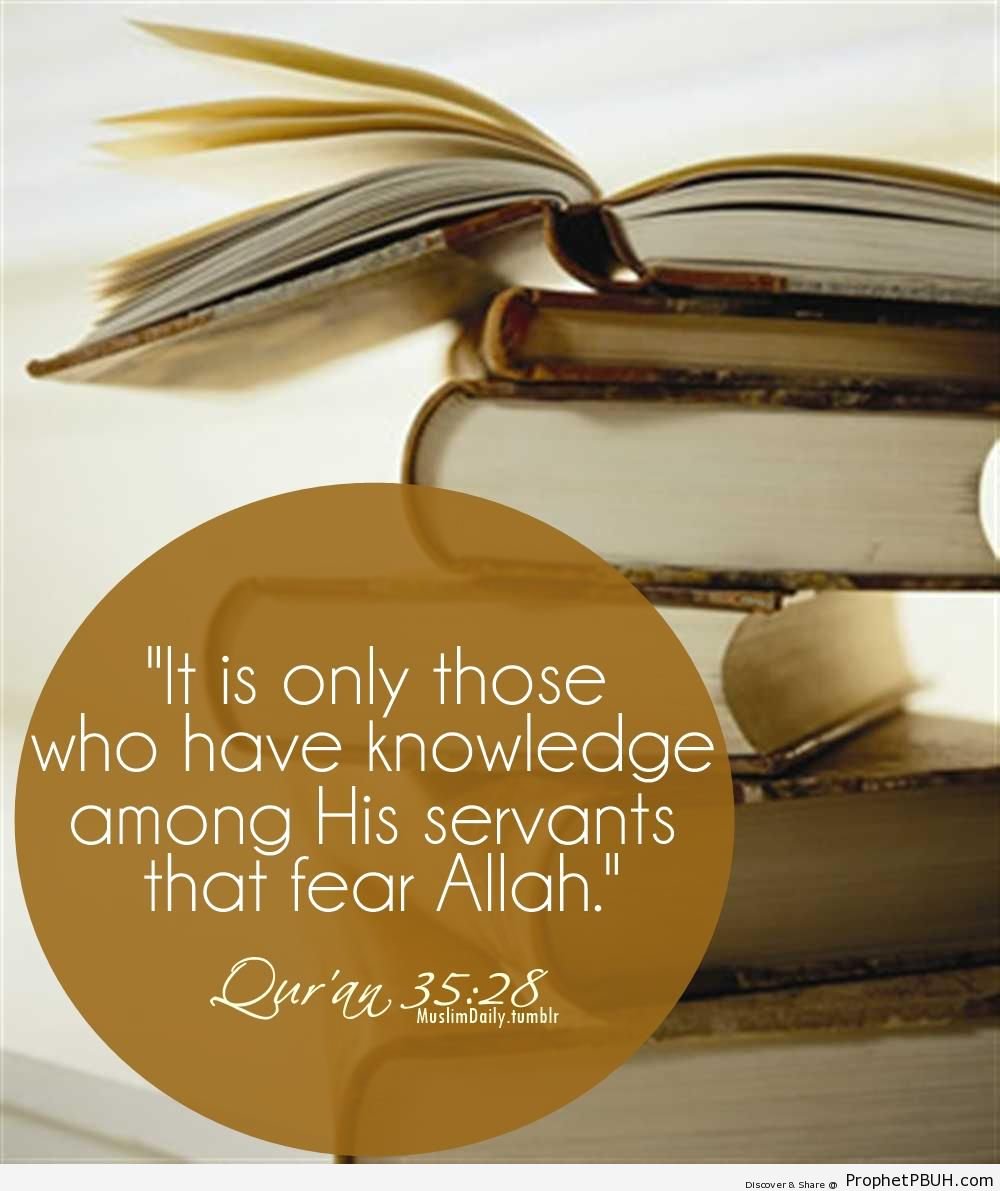 Science is a provision in life all over the world and in the hereafter because, in Islam, the law of origin demands is a duty although it is not necessary, science is prey in Islam. Allah has raised the ranks and status of those who know and has praised them in many places in the Quran.  Allah says:

There is a great difference between a Muslim who has knowledge and one who does not.  The Prophet described this in his saying:

The one who acquires the knowledge, satisfying the criteria for acquiring it usually becomes sincerely more humble. This humility is a sign of knowledge; it is in the heart and it appears on the outside. Yet, the humility of the heart entails more than talking softly or lowering one’s gaze in a shy manner.

Some frauds talk softly and lower their gazes in a shy manner, yet their hearts are like stone. The more knowledgeable one is, the more aware one becomes of the greatness of the Creator and the smallness of one’s self, and the more aware of the fact that one acquired only the knowledge which Allah enabled one to acquire.

Islamic Knowledge The Gateway To Success

The method used can be done by listening, reading, or following a guide or guide or view. Law requires science into two parts namely Fardu ‘ain and Fardu Kifayah as the following explanation:

“Indeed, verily they have believed that whoso exchangeth it (the Book of God) with that sorcery, he shall not profit in the Hereafter, and it is evil that their deeds sell themselves by magic if they know.” (Surah. Al-Baqarah 2: 102)

A hadith narrated by Bukhari and Muslims mentioned that magic is one of the great sins that lead to destruction. Narrated in Sahih Bukhari from Bajalah ibn Abdah, he said: “Umar bin Khattab e has decreed the command, namely:” Slay the witches of men or women “. Bajalah said next: “So we also carry out the death penalty against three sorcerers.” Read more about the Virtues of Sickness in Islam

Besides this also means incantations and amulets. According to the term: the science used to know how to combine the high forces that can affect with the low power that can be influenced, resulting in a strange act in the natural world, through writing and wafak that is well known among people who concert special attention) to this kind of science.

The object of the science of spell (talisman) is the essence of stars, secret numbers, characteristics of every object, and travel stars that influence earth objects. Seen in terms of its usefulness and its laws, this science does not provide the benefits and laws similar to witchcraft, so it is forbidden to learn and use it.

8. Ar-Raml (Science Predictions): In terms of the word ar-raml means a part of the earth that is different from the ground in terms of sorts (sand) Whereas the term means the study of the ways to create images or paintings on the sand or soft soil (mud), then remove it in a way delete some of the posts and leave some of the other posts by putting objects and using codes (spells). This science is used to know what will happen in the future. This science includes the science of shamanism and astrology (astrology).

Imam Muslim in his Saheeh narrated from one of the Prophet’s wives e, he said:

“Whoever comes to the predictor then asks him about a matter and he believes it, then his prayers are not accepted for forty days.”

9. At-Tanjim (Astrology): According to the term, the word at-tanjim means the science that deals with heavenly bodies and stars to know its power and influence on earth’s objects as a guide to events that will take place on earth, ie events or events related to humans and other earthly beings.

In essence, at-tanjim is not categorized as a science. It is more precisely categorized as a confusing and misguided thought born of people who are not guided by God I. The law of studying and practising or practising this astrology is categorized as an act of kufr, as it attributes events and natural events such as death and life, kemudharatan and benefits and others to other than Allah SWT. Read more about Law of Ramadan Fasting without Doing Salaah Prayer

“Whoever studies some of the astrology he has learned some of the witchcraft. Increasingly (the knowledge that he learns) is increasing as well (his sin). “(HR: Abu Daud and his isnad shahih)

10. l Jafr (Science Code / Formula): The word Al Jafr means a young goat or camel. The term means a science to know the formula or code based on secret letters, where the perpetrators think that in the code or formula some instructions show some events that will occur until the Day of Judgment.

In contrast to the four kinds of science above that the inventor did not know about or who first made it, this science was created by Aaron bin Said Al Lajali who claimed himself as a figure of the Shiite Zaidiyah stream.

This is based on a book he wrote whose report he claimed came from Ja’far Ash Sadiq, one of the Imams of the Ahl al-Bait (family of the Prophet e), in which the book discusses a science that can predict what will happen to ahlu al bait.

In terms of benefits, the actual knowledge of Al Jafr does not provide any benefit to the Muslims. Even this science is a waste and poison spread by thinkers and zendik figures. Wallahu A’lam. Read more about the Law of Women Giving Birth in the Month of Ramadhan

Ibnul Qoyyim rahimahullah has explained what science should be studied by every Muslim. That is, there can be no Muslim who does not learn it. The sciences include:

11. The science of the subjects of faith, which is faith in Allah Almighty, his angels, his books, his apostles, and the end.

12. Knowledge of Islamic Shari’a: Among the compulsory is the science of things that are specially done as a service such as the science of ablution, prayer, fasting, pilgrimage, and zakat. We are obliged to study matters relating to such worship, such as terms, harmony and cancellation

13. The sciences relate to the interactions that occur between a person and another person in particular (eg wife, child, and immediate family) or with others in general.

The science of compulsory according to the fourth type is different according to the different circumstances and position of a person. For example, a trader is required to study laws relating to trade or buying and selling transactions. This fourth science varies according to the conditions and needs of each. (Miftaah Daaris Sa’aadah, 1/156)

From the explanation of Ibnul Qoyyim rahimahullah above, it is clear that whatever the background of our work and profession, it is obligatory for us to study the sciences mentioned above. Claiming the science of religion is not only required of the cleric or cleric. Similarly, the duty of da’wah and advise the good, is not only devoted to the ustad or the da’i. Prophet Sallallahu ‘Alaihi Wa Sallam said,

“By Allah, if Allah guides one person only through your intercession, it is better for you than the red camel (ie the best and most expensive camel, pen.)”. (Narrated by Bukhari and Muslim)

And no doubt, that for da’wah is in need and must be accompanied by knowledge. Could be, that because of the condition of some people, they are not reached by the preaching of ustadz. For example, how many of our siblings lay in the hospital and left the prayer obligation?

“O Allah I seek refuge in you from knowledge which does not benefit, a heart which does not humble itself in fear, an insatiable desire, and supplications which are unanswered.” (Muslim)

This is where the important role of health workers, whether doctors, nurses or nutritionists who care for them, is to advise and teach how to wash and pray when sick. Similarly, someone who works as a driver should remind passengers, for example, to keep on praying even on the journey. Of course, all of that requires the provision of adequate religious knowledge.

“O Allah, I ask you to grant us beneficial knowledge, good, pure and permissible sustenance, and deeds which are accepted by You.” (Ibn Maajah)

Finally, lest we become very clever about the ins and outs of the science of the world with all the problems, a neglect the science of religion. Let us meditate on the word of Allah Ta’ala,

“They only know who is born (only) from the life of the world, while they neglect the Hereafter.” (Surah Ar-Ruum 30: 7)

To conclude, seeking knowledge is an act of worship that requires you to keep your intention sincerely for Allah alone and none else, seeking His Pleasure and reward.  Do not seek knowledge to show off or compete with others, or to enliven one’s gatherings. The Prophet said:

“Whoever seeks that knowledge which is (usually) sought to seek the pleasure of Allah to gain some worldly benefit, he will not sense the scent of Paradise on the Day of Judgment.” (Ibn Maajah)

Also know that knowledge is of no importance if one does not reap its fruits, which is to practice the religion of Islam as Allah loves. So one should try to practice what one learns as living Islam is what makes a person to Paradise. We close with some supplications which the Prophet Muhammad himself made in regards to seeking knowledge.

“O, Allah! Bring us to benefit by what you taught us, and teach us that which brings us to benefit, and increase us in knowledge” (Ibn Maajah)

Knowledge is the gateway to success, as known by many. However, some people understand this statement differently. The Islamic definition and concept of knowledge, and how it is a gateway to success in this world and the Hereafter, is an ambiguous matter to many people. God willing, we hope to clarify this ambiguity hereinafter.