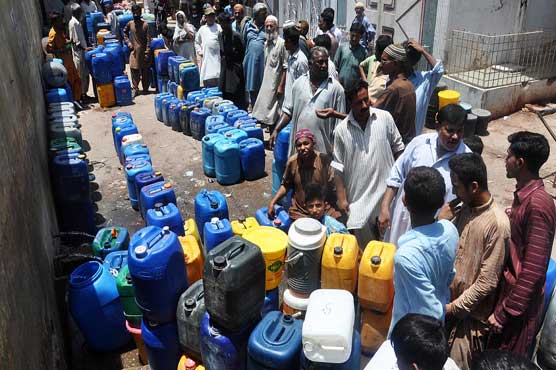 As one indication of the intensity of the problem, it is estimated that about 200,000 children in Pakistan die every year of diarrheal diseases alone.Pakistan was a water rich country just a few decades ago; however, a recent World Bank Report mentioned that Pakistan is now among the 17 countries that are currently facing water shortage.It is pertinent to mention here that the major source of drinking water in Pakistan is groundwater, so water availability is the second most serious issue.Only 7 per cent of rural population depends on dug wells or on rivers, canals and streams.

Situation in Sindh is considerably worst as 24 per cent of the rural population is depending on such sources and where the situation is further deteriorated over the period.Pakistan is one of the top 10 countries with the lowest access to clean water, according to a latest study. The study entitled “The Water Gap — The State of the World’s Water 2018”, by WaterAid, was released on Thursday to mark World Water Day.

Pakistan ranks number 9 in the list of top 10 countries with lowest access to clean water where 21 million out of the total population of 207 million, do not have access to clean water. India, Ethiopia and Nigeria are the top three countries without safe water.Water pollution, discharge of effluents and unsafe drinking water are factors among others that pose a threat to human wellbeing and Pakistan’s ecosystem. While some do not have water to drink, others waste it in vast quantities.An arid country, Pakistan depends heavily on annual glacier melts and monsoon rains.

Pakistan is facing severe challenges; industrialisation and the demands of agriculture, depleted and increasingly saline groundwater, rapid urbanisation and drought have all taken their toll.Highlighting the discrepancies between the richest and the poorest, the report suggests that 98 per cent of the richest people have access to clean water close to home as compared to 79.2 per cent of the poor.

Pakistan’s largest province, Balochistan — which lies in a zone that sees low rainfall — is facing severe drought and famine. The provincial capital, Quetta, is facing a catastrophic situation where the shortage of 20 million gallons of water daily, according to Quetta Water and Sanitation Authority. “Half of Balochistan is gripped by a drought which has affected people, land, water resources and wildlife,” according to Dr Ainuddin, chairperson of the Disaster Management Department at the University of Balochistan.Pakistan has the largest contiguous irrigation system in the world. However, owing to the poor state of infrastructure, about two-thirds is lost due to poor transmission and seepage.

Pakistan has in most areas of agriculture a monsoon climate, and there might be abundant rainfall during the wet season and then a very long dry season where crop production depends very heavily on irrigation water.Pakistan luckily had the largest irrigation system, but water losses from the system were the highest in the World, due to which its agricultural sector have been affecting badly as population of country increasing rapidly but as compare to population growing capacity of agricultural sectors reducing rapidly due to water shortage.

However, poor management of water and absence of national water policy has led to water crisis even in big cities like Karachi where roughly 20 million residents regularly face water shortages. A 2017 report by Indus River System Authority revealed gross mismanagement saying that “Pakistan dumps water worth approximately $21 billion into the sea each year due to lack of water conservation system.”

It is an impressive for Pakistan to provide safe and quite hygienic potable water to its citizens, because it is the human capital which causes a nation to be developed or to be remained the part of “Third World”.But history proved it many times before when man acted against nature the nature reacted with double strength. Now we have two ways either to start working for the immediate stop of these key issues or to wait for the wraith of nature (environment) in the form of deaths from diseases, floods, droughts and cyclones but it, s fact that wraith can’t be subdued.