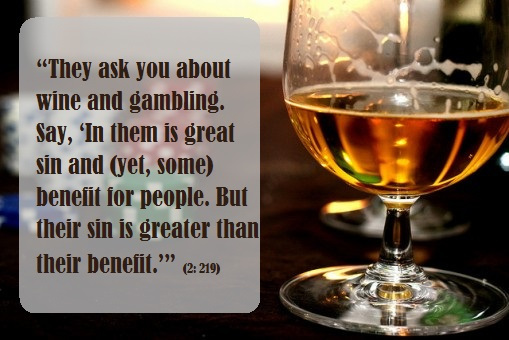 In Islam, it refers to “the mother of evils”, because in reality someone who drinks a lot of wine and its derivatives, loses many of his intellectual faculties, for lack of timidity he goes so far as to commit many things forbidden by the Islamic religion. Everyone knows, Muslim and non-Muslim alike, that drinking alcohol is considered a sin in Islam. Consuming alcohol is listed as one of the major sins; one of the greater sins for which eternal punishment is promised. Allah says:

They ask you about [the] intoxicants and [the] games of chance Say, “In both of them (is) a sin great, and (some) benefits for [the] people. But the sin of both of them (is) greater than (the) benefit of (the) two.” And they ask you what they (should) spend. Say, “The surplus.” Thus makes clear Allah to you [the] Verses so that you may ponder.” (Surah Al-Baqarah 2:219)

In religion Islam, anything that is harmful to human beings and society is forbidden. Alcohol is indeed harmful and negatively affects the mind and the body. Therefore, Islam takes the determined stand towards alcohol and forbids its consumption in either small or large quantities.  Alcohol is the thirteenth among the Greater Sins in the religion Islam.  Allah says:

“Only the Shaitaan intends to cause between you [the] enmity and [the] hatred through intoxicants and gambling and hinders you from (the) remembrance (of) Allah and from the prayer. So will you be the ones who abstain?” (Surah Al-Ma`idah 5:91)

Drinking alcohol can, in fact, cause permanent damage to memory and learning ability. It darkens the mind, causes disease, wastes money, and destroys individuals, families, and communities. The liver is severely damaged as well. Alcohol abuse leads to cirrhosis which in turn leads to liver failure, liver cancer, and even death. It also causes one’s stomach to endure chronic inflammation which leads to pneumonia, kidney and urinary tract infections, and kidney failure. Allah says:

“O my two companions (of) the prison! As for one of you, he will give drink (to) his master wine; and as for the other, he will be crucified, and will eat the birds from his head. Has been decreed the matter about which you both inquire.” (Surah Yusuf 12:41)

The tools of Satan must surely be prohibited. Eighth, the phrase ‘to hinder you from the remembrance of Allah,’ is another emphasis of our claim. Whatever causes one to forget about Allah is impermissible. Ninth, Alcohol keeps one from praying. And tenth, the phrase ‘will you, then, relinquish’ is also a form of emphasis. Allah says:

“And from fruits the date-palm, and the grapes, you take from it intoxicant and a provision good. Indeed, in that (is) surely a Sign for a people who use reason.” (Surah An-Nahl 16:67)

A Muslim cannot have anything to do with alcohol; he can’t drink it, can’t sell it, can’t buy it for someone else, can’t make it, can’t deliver it, can’t transport it, and can’t use any proceeds produced from it. Therefore, if anyone does not avoid it, he then disobeys Allah and His Messenger and thus entails punishment. Allah says:

“O you who believe! Verily the intoxicants and [the] games of chance and (sacrifices at) altars and divining arrows (are an) abomination from (the) work (of) the Shaitaan, so avoid it so that you may (be) successful.” (Surah Al-Ma`idah 5:90)

“Every intoxicant is wine and every wine is unlawful. Whoever it in the world and dies addictive to it without repentance, he will not drink it in the Hereafter.”Undoubtedly, wine is the core of abominations. Moreover, he who drinks it was cursed in various ahadith. May Allah count you and us among the devout and obedient people and let us be protected from wrongdoing. He is the Most Generous, the Most Bounteous.