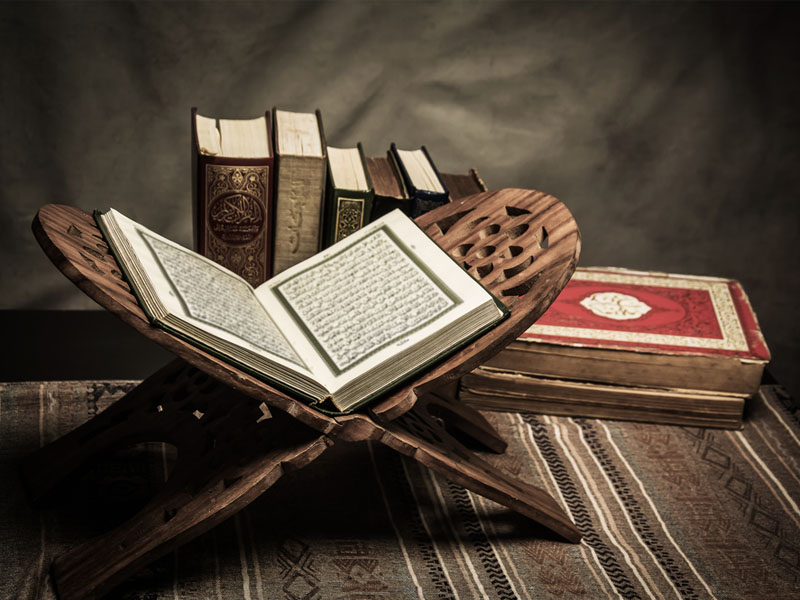 As Muslims we believe that the Quran is a revelation from God, its origin is divine, and not man-made. Now, what good reasons are there to believe that the Quran is, in fact, the word of God, rather than the word of the Prophet Muhammad (PBUH)The Prophet Muhammad peace be upon him was unlettered, meaning he did not know how to read and write. He did not have the capacity to write the Quran. Allah says:

“Those who follow the Messenger, the unlettered Prophet, whom they find him written with them in the Taurat and the Injeel. He commands them to the right and forbids them from the wrong, and he makes lawful for them the pure things and makes unlawful for them the impure things and he relieves from them their burden and the fetters which were upon them. So those who believe in him and honour him, and help him and follow the light which has been sent down with him. Those (are) [they] the successful ones.” (Surah Al-A’raf 7, 157)

The Qur’an refers to him as the unlettered prophet. The Quran even notes that Muhammad, who became a Prophet at age 40, never wrote a book or anything before. There is a lot of good evidence when reading the Quran, that it wasn’t created by the Prophet Muhammad (PBUH). Allah says:

“And verily We have explained to mankind in this Quran from every example, but refused most (of) the mankind except disbelief.” (Surah Al-Isra 17, 89)

If you read the Qur’ān, you will immediately recognize that it has a very confident tone. The Quran makes it very clear that God is the God of everybody, not just the Arabs. Prophet Muhammad could not read or write. The Qur’an itself confirms this: Allah says:

“And ordain for us in this [the] world, good and in the Hereafter. Indeed, we have turned to You.” He said, “My punishment – I afflict with it whom I will, but My mercy encompasses everything. So I will ordain it for those who (are) righteous and give zakah and those who [they] believe in Our Verses.” (Surah Al-A’raf 7:156)

Perhaps the greatest miracle of the Qur’an is its inimitability. Some people claim that Muhammad peace is upon him to learn the Qur’ān from others. However, they provide no evidence to support this claim. They mention that Muhammad travelled when he was a trader but travelling by itself is not proof that someone is learning. Allah says:

“Nay, it (is) Verses clear in (the) breasts (of) those who are given the knowledge. And not reject Our Verses except the wrongdoers.” (Quran: 29:49)

The claim that he learned from someone cannot be true for several reasons. First, his life is the most documented in history. The author of the Qur’an tells us that it is impossible for any human being or jinn to produce just one chapter like the Qur’an, even if we were to all aid one another in the effort: Allah says:

Say, “If gathered the mankind and the jinn to [that] bring the like (of) this Quran, not they (could) bring the like of it, even if we’re some of them to some others assistants.” (Surah Al-Isra 17, 88)

What’s remarkable is that the tools needed to meet this challenge are the finite grammatical rules and the twenty-eight letters that comprise the Arabic language; these are independent and objective measures available to all. Allah says:

“And not (did) you recite before it, any Book, and not (did) you write it with your right hand, in that case surely (would) have doubted the falsifiers.” (Surah Al-‘Ankabut 29:48)

For argument’s sake, where the origin of the Quran is merely the invention of the mind of Prophet Muhammad, then surely another human being, with equal or greater literary ability, should be able to produce a chapter like it. Many have tried and failed to meet this challenge, and this is in spite of having the very blueprint, i.e. the Qur’an itself, as an example. Allah says:

“Then (do) not they ponder (on) the Quran? And if it had (been) from other than Allah, surely they (would have) found in it much contradiction.” (Surah An-Nisa 4, 82)

There are many reasons that prove that the Qur’ān is the word of God and not of Muhammad peace be upon him. Muhammad was simply delivering a message from God. The above reasons are but a few pieces of evidence that Muhammad peace is upon him did not author the Quran. The Quran is the living miracle that continues to show its miracles despite its being revealed 1400 years ago.