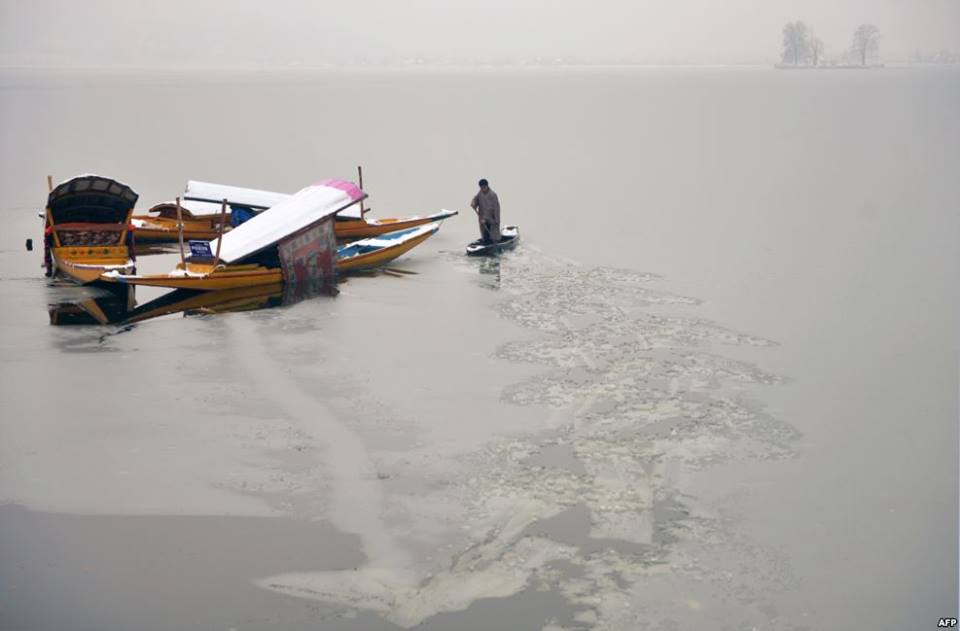 Dal is a lake in Srinagar, the summer capital of Jammu and Kashmir. The floating gardens, known as “Rad” in Kashmiri, are one of the stranger aspects of Dal LakeThe urban lake, which is the second largest in the state, is integral to tourism and recreation in Kashmir and is named the “Jewel in the crown of Kashmir” or “Srinagar’s Jewel”.Over 15km around, Dal Lake is Srinagar’s jewel, a vast sheet of water reflecting the carved wooden balconies of the houseboats and the misty peaks of the Pir Panjal mountains. Flotillas of gaily painted shikaras (gondola-like taxi boats) skiff around the lake, transporting goods to market, children to school and travellers to delightful houseboats inspired by originals from the Raj era.

A Kashmiri boatman uses his oar to break the ice layer of the frozen Dal Lake after a heavy snowfall in Srinagar.There are three islands in the lake; three real islands anyway, there are other sorts of islands joined by causeways. Around the lake are many of Srinagar’s most interesting sights, in particular the pleasant Mughal gardens. It’s also flanked by hills, particularly along its east bank. The Shankaracharya hill provides a very fine view over the lake.

The waters of Dal Lake are amazingly clear. Nevertheless one is advised not to go swimming in the lake although the swimming houseboats, equipped with diving boards and chutes, are moored in a deeper part of the lake, ‘upstream’ from the concentration of houseboats. Swimming here can be quite refreshing, especially on a hot afternoon. One will undoubtedly be joined by a number of Indians, including Hindu women who swim in their saris.