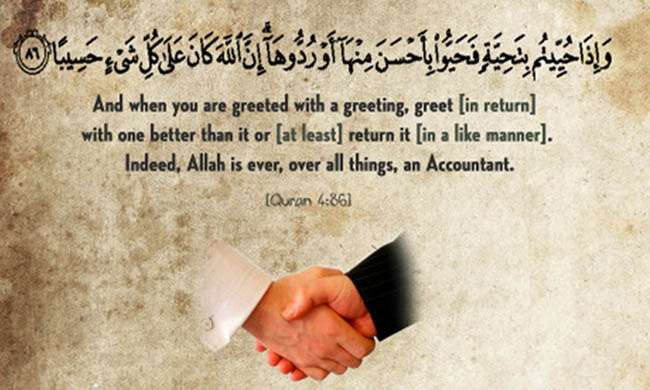 The religion of Islam is the complete code of life that strongly supports the concept of human welfare and urges that a Muslim should reflect accordingly. Islam motivates its followers to contribute positively towards their social setup and not get indulged in any mischievous or harmful activity that is in a way threatening or obstructive. Islamists use the Quran: which is considered the ‘sacred text of Islam’ or the ‘holy book of Islam’ and it contains the teachings of Muhammad which he passed on from Allah. Allah says:

“He (is) the One Who created you from a single soul and made from it its mate that he might live with her. And when he covers her, she carries a burden light and continues with it. But when she grows heavy, they both invoke Allah, their Lord, “If You give us a righteous (child), surely we will be among the thankful.” (Surah Al-A`raf 7:189)

The intellectual nature of man is made up of mind or intelligence or reasoning power. To this aspect, Islam pays extraordinary attention and builds the intellectual structure of man on the most sound foundations. Islam classifies knowledge into two, the basic or fundamental which must be secured by every individual and the specialized knowledge which should be secured by only a few in society.

The importance and benefits of Islam:

1: Declaration of Faith: “shahada”
2: Daily Prayer: Muslims pray a total of five times every day, and they face Mecca the holy city of Islam, during their prayers.
3: Alms for the Poor: Muslims consider giving charity to unfortunate ones important and giving donations to those in poverty.
4: Fast During Ramadan: From sunrise to sunset, Muslims fast (not eating) during the month of Ramadan – sick people and young children are exceptions to this rule.
5: Hajj: Pilgrimage to Mecca: for being of high social status, but they must wear simple clothing that makes the unequal statuses between people disappear so that everyone is equal in God’s presence.

Core Religious Practice of Islam: The Five “Pillars” of Islam

In Islam, worship is part of daily life and is not limited to mere rituals.  The formal acts of worship are known as the five “pillars” of Islam.  The five pillars of Islam are the declaration of faith, prayer, fasting, charity, and pilgrimage.

“Verily, Allah loves those who repent and who purify themselves.” (Surah Al-Baqarah 2:222)

Islam treats peace in the eschatological sense, as the ultimate goal of human life, almost synonymous with salvation. A second way in which Islam looks at peace might be called the psychological sense, as tranquillity and peace of mind, inner confidence born of faith that enables the religious believer to face adversity without anxiety or despair. Particularly when one is facing the approach of death, the believer can attain peace of mind, which will enable the person to overcome spiritual turmoil and fear.

Classical scholars of Islam have condensed the teachings of Prophet Muhammad into a few statements.  These comprehensive statements touch every aspect of our lives.  Some of them are:

The core of Islamic Law or Shariah

The core of Islamic Law is the preservation of:

Islam is a religion in which faith is based on clear proof. Islam counsels us to follow a better path when people insult us by not responding to them in the same manner and responding to their evil with good. If someone were to ask, what is the core of Islam in the fewest possible words, the answer would be, “it is within the word Islam itself: to serve, worship, and lovingly submit to God.”Islam has paid great attention to norms, which can protect basic values. We can’t explain all Islamic norms relating to basic values, which we have mentioned above.