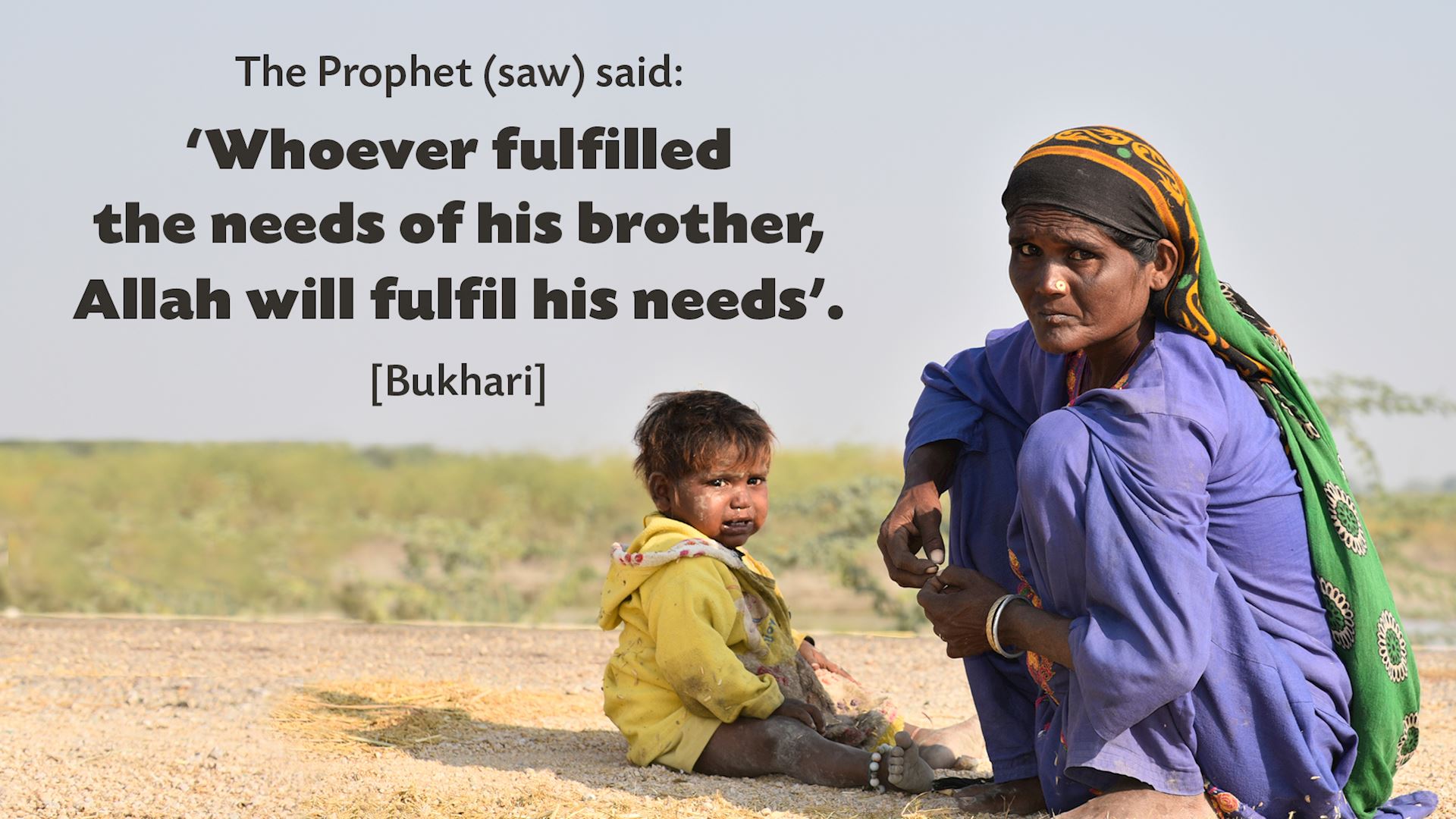 Charity or alms, also called Zakat or Sadaqah in Arabic, is the third of the Five Pillars of Islam and thus, fundamental teaching of the Islamic faith. Being charitable and taking care of the weak and poor are essential aspects of the Muslim character. Charity is so important that it comes only after the declaration of faith (shahada) and prayer (salat). Support struggling communities and gain Allah’s pleasure through charity. Muslims believe that everything we are given is bestowed upon us by Allah. Indeed, wealth does not decrease by giving in charity. Allah says:

“Those who spend their wealth in the Cause of Allaah, and do not follow up their gifts with reminders of their generosity or with injury, their reward is with their Lord. On them shall be no fear, nor shall they grieve.” (Surah Al Baqara 2:262)

Charity is an act of giving out to the people in need and society at large. The charity can be in the form of money, goods, food or even the simple act of spending time with those who need your assistance in any form. Charity must be given for the sake of Allah, and in secret, not for worldly gains, prestige, or growing an altruistic reputation. Allah says:

“Never will you attain the good [reward] until you spend [in the way of Allah] from that which you love. And whatever you spend – indeed, Allah is Knowing of it.” (Surah Al-Imran 3:92)

Charity leads to the purification of oneself from all kinds of evils. The two other pillars are fasting during the month of Ramadan and the pilgrimage to Mecca (hajj) for every Muslim whose health and finances permit it. Charitable giving is one of the most important responsibilities in Islam because it impacts the welfare of the individual and society as a whole. It is considered the noblest way of spending wealth. Allah says:

Charity is the essence of Islam and it has great importance in the lives of Muslims. Charity is connected to generosity, a virtue that, not surprisingly, is central in Islam. Charity is considered a quality of the soul that Allah gives to those He loves, those who are not attached to material wealth and instead use what they are given to please God and, thereby, make the world a better place.  understanding Islam as a whole.

Here are some Islamic emphasis on Charity and its importance:

Charity is one of the things that hit two targets with one arrow. Charity must be given for the sake of Allah, and in secret, not for worldly gains, prestige, or growing a reputation of being altruistic. This would detract from the giving and deprive it of the blessings associated with it. The edict of secrecy and discretion is meant to prevent boastfulness and protect the dignity and honour of the person receiving the charity, which is, in and of itself, yet another act of sadaqah. Allah says:

Charity should be given to attain God’s pleasure and forgiveness, not to gain anything from other human beings. Muslims believe that everything we are given is bestowed upon us by Allah and therefore, nothing, not even our bodies, belong to us, but to God. We are merely trustees of these bounties and we are to use them in the best of ways, as God wills, to uplift the rest of His creation. It is the same with wealth. Wealth does not belong to us, but to Allah. Allah says:

We are mere “distributors” of God’s wealth. Therefore, when we give in charity, we are essentially sharing Allah’s blessings with His creatures. Because we don’t own anything, we don’t lose anything by giving it. Instead, we only gain rewards from Allah. Charity is purely for the sake of Allah and no worldly gain should be intended while making charity. It should only be made to seek Allah’s forgiveness and His blessings.

Charity is mentioned in the Quran at least 19 times stressing its importance in Islam. In fact, premodern Muslim societies were built on charity. Those who were poor were taken care of because it was considered the responsibility of each community to protect its weak, orphaned, and destitute. Because wealth belongs to God, the poor have an indisputable right upon it. It is not seen as a great act of piety to feed and give charity to the poor; it is rather the obligation of those who were given plenty.  Allah says:

The duty to be charitable includes financially caring for the poor and the community, but also one’s own family. These are considered part of the “Rights of God.” This is in part because hoarding is in a sense a usurpation of God’s role as the true owner of all wealth and a breach of God’s trust. Your seeing for a man with bad sight is a charity for you, your removal of a rock, a thorn or a bone from the road is a charity for you. Islam is above all a religion of moderation and fairness, a faith of the “middle way,” which means, we should not give so much in charity that we become needy ourselves. Allah says:

“And establish prayer and give zakah, and whatever good you put forward for yourselves – you will find it with Allah. Indeed, Allah of what you do is Seeing.” (Surah Al-Baqarah 2:110)

The Prophet was generous in every way, not just with his wealth, but also with his time and kindness, for generosity is not limited to material things. Even a smile is a charitable act. Your smiling in the face of your brother is charity, commanding good and forbidding evil is charity, your giving directions to a man lost in the land is a charity for you. Thus Islam and Quran heavily promote charity and every Muslim is rewarded with something way better than what he gives up in way of Allah.