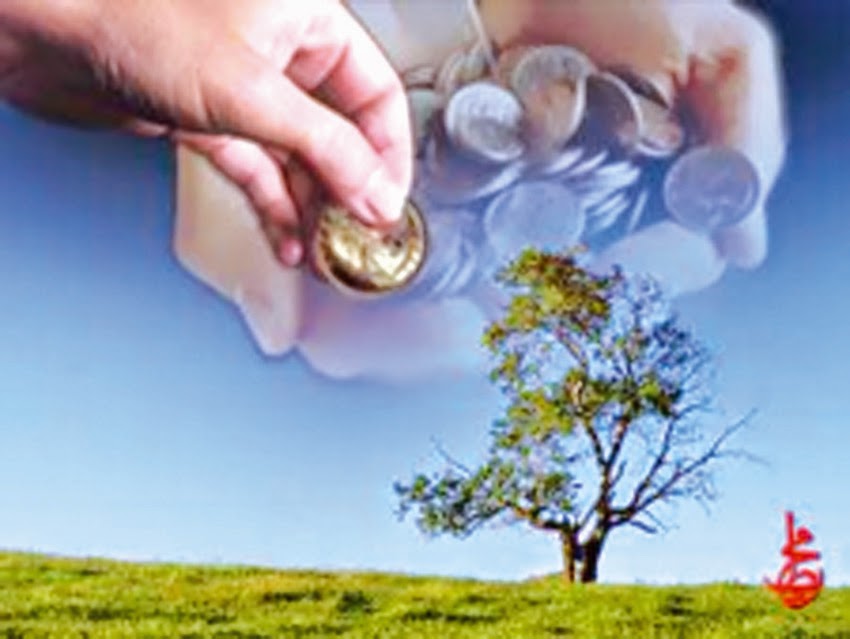 Charity is one of the five pillars of Islam and an important part of worship for Muslims. Materialistically, we could own everything we could ever want in this world, but this wouldn’t necessarily guarantee us any real happiness or satisfaction. Charity, is the third pillar of Islam, major teaching. Being charitable and providing for the needy are important components of the Muslim character. Allah says:

“Allah will destroy Riba (usury) and will give increase for Sadaqat (deeds of charity, alms, etc.).” (Surah Al-Baqarah 2:276)

Charity is a central tenet of Islam: everything one has belonged to God and therefore a Muslim is obliged to share the wealth with those less fortunate. Being caring and compassionate for one’s fellow human beings is a central part of Islam. When reading the Qur’an, one cannot help being struck by the number of times charity is mentioned. Feeding the poor and needy, supporting orphans, relatives and travellers, spending in the way of Allah. Allah says:

“The likeness of those who spend their wealth in the Way of Allah is as the likeness of a grain (of corn); it grows seven ears (grains of corn), and each ear has a hundred grains. Allah gives manifold increase to whom He pleases. And Allah is All-Sufficient for His creatures’ needs, All-Knower.” (Surah Al-Baqarah 2:261)

Charity is an act through which a Muslim shows his good feelings and compassion for other Muslims and it is the real identity of a true Muslim who puts his trust in his Supreme Lord. If a Muslim feels the pain of his Muslim brother and likes the same comfortable and good life for others which he likes for his own self then it is a natural reaction to give in charity and ease others’ sufferings and difficulties. Allah says:

“Spend (in charity) out of the sustenance that We have bestowed on you before that time when death will come to someone, and he shall say: “O my Lord! If only you would grant me a reprieve for a little while, then I would give in charity, and be among the righteous.” (Surah Al-Munafiqun 63:10)

Remember, charity does not only consist of monetary giving but also in the volunteering of one’s time to support a good cause. Nothing can beat the feeling of contentment you get when you know you have made a positive change in someone’s world. Islam teaches us to be mindful of each other’s duties and rights; this includes all of Allah SWT’s creation – including children.

Charity is mentioned dozens of times in the Quran:

The existence of countless starving, poor, hungry and destitute Muslims and non-Muslims in the world points to the need for this essential teaching to be put into practice. Affluent Muslims may not realize how their wealth could strengthen whole communities. Giving charity correctly is crucial to both the well-being of the needy as well as the ultimate happiness of the wealthy. The Prophet emphasized this principle repeatedly. Allah says:

“Whatever you spend with a good heart, give it to parents, relatives, orphans, the helpless, and travellers in need. Whatever good you do, Allah is aware of it.” (Surah Al-Baqarah 2:215 )

Islam calls upon its followers to reach out with open hands, and give in charity as a way of life. In the Quran, charity is often mentioned along with prayer, as one of the factors that identify true believers.

Spending in Allah’s Cause is a sign of one’s true and sincere faith, the strength of trust in his Lord and hope for great rewards both in this worldly life and in the Hereafter. Besides the above-mentioned benefits and virtues, it has many other benefits, which a Muslim long for. One should not be afraid of poverty. He must spend for sake of Allah. It is Satan that frightens us with poverty and beautifies for us miserliness and stinginess. Allah says:

“Satan threatens you with poverty and orders you to immorality, while Allah promises you forgiveness from Him and bounty. And Allah is All-Encompassing and All-Knowing.” (Surah Al-Baqarah 2:268)

Finally and foremost, the truest benefit of giving to others is the promise of our reward in the Hereafter, which will far outweigh what we may have given in this world. Allah blesses acts of almsgiving and charity and makes them the cause of the increase in wealth rather than a decrease in it.