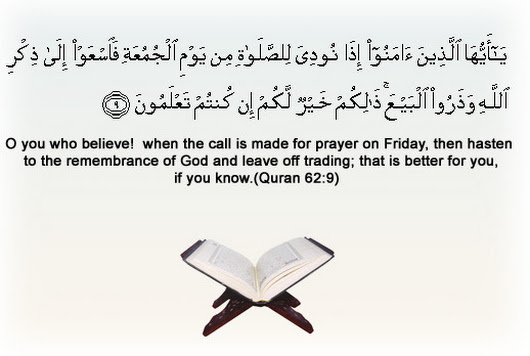 Jummah (Friday) is the most significant day of the week because Muslims gather for prayer in the congregation on Friday. Before the Friday prayer, Muslims listen to a lecture that is designed to permit them with important knowledge about Islam, Prophets and Allah Almighty. As we know the congregation prayers are strongly emphasized in the religion of Islam, so it is the Day on which Muslims in a large amount as compared to other days gather together for the Jummah Prayer. Allah says:

Among the seven days in Islam, there is one particular day that Allah said as a very important day. In the day, the special mercy of Allah is granted, freely for everyone who asks for it. For every good deed we do, Allah multiplies the rewards. That one particular day is Jummah. Allah says:

“Then when is concluded the prayer, then disperse in the land and seek from (the) Bounty of Allah, and remember Allah much so that you may succeed.” (Surah Al-Jumu’a 62:10)

The day of Jummah is the Mother of all days and the most righteous and best of the days. That is the reason believers wait for it with so much devotion. It is a day loaded with kindness. It is a time when Muslims meet up to respect just a single Lord, discover the quality and show condolence by standing shoulder to bear and reaffirming their confidence and commitment to Him. Allah says:

“We have certainly created man into hardship.”  (Surah Al Balad 90:4)

Friday is more demanding and more worthwhile than other days of the week. Friday is the day on which Muslims gather to pray in congregation. It is an honoured day that has been assigned all things considered by Allah Almighty; no other day of the week shares its supremacy. There are several benefits to performing Jumma Prayer according to hadith. The Friday prayer is obligatory for every man except the sick, the slave, the woman, and the child.

The Blessings and special deeds of Jummah, the best day of the week:

It is a day on which sins are forgiven, as narrated by Salmaan, may Allah be pleased with him. Friday is the fifth day of the week out of the seven days. The word Jummah means the day of Friday. Its literal meaning is Congregation. In Islam, this day is given the most important than any other day of the week. Allah says:

Dying on Friday, during the day or night, is a sign of a good end, for the one who dies on that day will be protected from the trial of the grave. There are several Benefits of Friday Prayer. On this day, people are gathered at the mosques to offer the Friday prayer. It is noted that even if a man doesn’t pray regularly, he never misses the Jummah Prayer ever. Narrated Abu Hurairah (R.A): Allah’s Messenger (Peace Be Upon Him) talked about Friday and said:

“There is an hour on Friday And if a Muslim gets it while offering Salat and asks something from Allah Almighty, then Allah will fulfil his demands and Prophet Muhammad (Peace Be Upon Him) pointed out the shortness of that particular time with his hands.” (Sahih al-Bukhari)

One special thing about Jummah is the Jummah prayer. The prayer was a direct instruction from Allah to His servants, and it has to be fulfilled, especially for men. No matter how busy you are, leave all of them once you heard the call.

Importance of Jummah in Islam:

If this day is given such significance, there is a reason behind it. The importance of Jummah is Islam is as follows;

The importance of Friday prayer that is when Muslims hears the Adhan for Jummah Prayer he should close all the trade and any business he is doing and should turn towards the remembrance of Allah that is Jummah Prayer. Muslims mustn’t neglect the prayer of Friday and also other obligatory five times a day prayers for business or otherworldly matters.

“The best day the sun rises over is Friday; on it Allah created Adam. On it, he was made to enter paradise, he was expelled from it, and the Last Hour will take place on no other day than Friday” (Tirmidhi)

As this day is considered the best of the days; and the master of the week came as the month of Ramadan is known as the master of all the Islamic months, there are certain Benefits of Jummah Prayer that no other player can match.

Below are the merits of Friday and the Jummah Prayer;

On such virtuous days, many people waste their time aimlessly and prefer to sleep all day or set out for a picnic and sightseeing. Since Friday is a superior day good acts performed on this day are superior too. Friday is a special day for the Muslim ummah. The congregational prayer performed on Friday holds special significance in the life of a Muslim. May Allah give us the chance to offer Jummah Prayer regularly so that we can earn all its blessings and rewards! Ameen