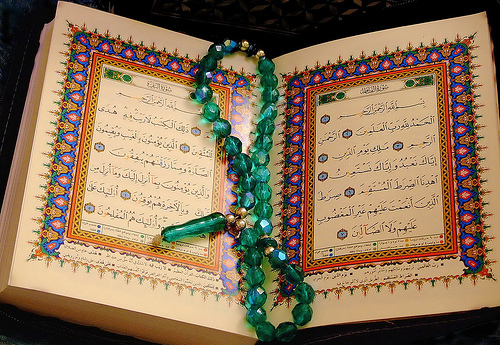 Muslims are asked to call upon God during their supplications by the most appropriate names that relate to what they are asking for. For example, if one is seeking forgiveness from God for a sin they have committed, they would call upon Him by His name “Al-Ghaffar,” meaning “The Ever-Forgiving.” If one is asking for peace and tranquillity in their life while experiencing a period of tension, they would call on God by His name “As-Salaam,” meaning “The Ultimate Source of Peace.” Allah says:

The Prophet Muhammad (PBUH) is reported to have said that no man’s good deeds are alone enough to get him admitted into Paradise, but it is only by the Mercy of God that people will enter Paradise. Our deeds are a tool to get close to God to a place where we can be hopeful of His Mercy. Allah says:

In order to familiarize ourselves with Allah’s Attributes, we have to consult the Holy Qur’an, traditions, or even common sense. His Being precedes time. His Existence precedes non-existence, and His eternity precedes beginning. By creating the senses, it is known that He does not have the same. Allah says:

Say, “Invoke Allah or invoke the Most Gracious. By whatever (name) you invoke, to Him (belongs) the Most Beautiful Names. And (do) not be loud in your prayers and not be silent therein, but seek between that away.”  (Surah Al-Isra, 17:110)

The word Sifaat means attributes, the singular form is Si’fah. There are 20 Sifaat that are waajib (essential) for Allah.

Allah made the human being exist after having been non-existent, and then this human being shall be annihilated (Annihilation of humans is by complete death, which is defined as the soul completely departing the body. The souls do not annihilate and some bodies do not decay in the soil.) This is why the human being’s existence is among the intellectual possibilities.