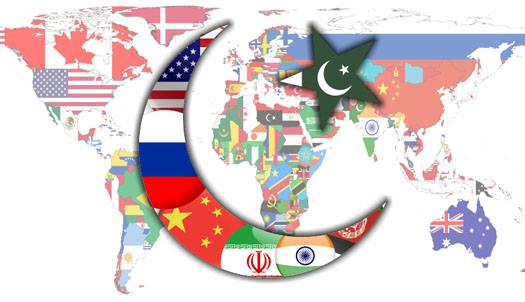 Theoretically, Pakistan’s foreign policy has always been ideology-specific. But, in fact, the ideological content of it has never been implemented. In the age when the Western thinkers have been clamouring about the inevitable “clash of civilisation”, there has been an exigency that we should rationalise our ideology, which has had many grey areas. It is pertinent to note here that though ideology isn’t a significant driving force in the contemporary inter-state relationship, it’s the key determinant of Pakistan’s foreign policy.
The state ideology of Pakistan, conceived by Allama Iqbal and pursued by Muhammad Ali Jinnah, was simple and rational. This should have reflected in the country’s foreign policy objectives but it hasn’t. Today, if the entire world is looking at Pakistan’s ideology with doubt, it’s mainly due to the insincerity of our policymakers, both past and present, to the raison d’être the state itself. The upshot of this suspicion is that despite claiming peaceful ideals today, the name of the country is associated with terrorism.

Pakistan is a small state vis-a-vis other middle powers like India. But the role it has been performing in the international arena hasn’t been commensurate with its relative size and status. Though Pakistan has a huge population, the latent talents of its people haven’t been explored. Therefore, instead of contributing anything positive to the national development, the population has become a burden on the national resources. There has been persistent social chaos, which aggravated with the passage of time, and today there is no viable strategy in sight for addressing these multidimensional complex issues. The rulers of the country should have reconciled the differences and divisions among the people on sectarian, ethnic and regional lines and must have sincerely tried to allay the spectre of discontent among different ethnic groups, instead of pursuing irrelevant, incompatible and unwanted policies and strategies. This could largely happen with a visionary leadership, which could formulate such foreign policies, whose only focus would have been on infrastructure, human and economic development in the country.

Geographically, Pakistan lies in a region which is of immense strategic and economic importance. So, keeping that in view, Pakistan should have been extra cautious and friendly in its relations with the neighbours. Unfortunately that didn’t happen but Islamabad is not responsible for it entirely. Rather, India and Afghanistan have bigger contribution to it.

The failure of our foreign policy, in recent years, can best be judged by the fact that due to the country’s involvement in the Afghan riddle and now in the Saudi-led military alliance, even our one-time staunch ally Iran has been severely critical of Pakistan’s policies.

Now Pakistan has a huge project in the shape of CPEC to have much-needed development and economic growth. Ours foreign policy strategy, in this regard, can only be successful if, in the words of great German political philosopher Immanuel Kant, it brings “the greatest good to the greatest number.”
By Dr Raza Khan