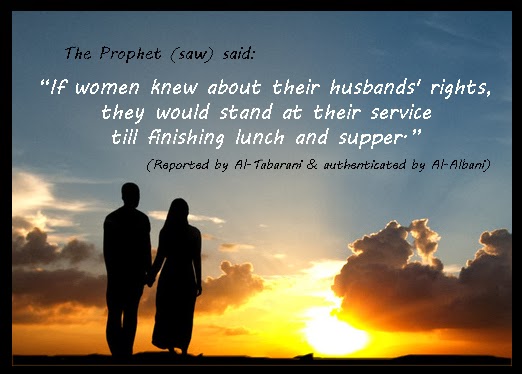 Marriage in Islam is a strong bond that combined two different personalities between a man and a woman to enter the household world full of love, affection, intimacy, and pleasure. Islam has enjoined upon the husband duties towards his wife, and vice versa, and among these duties are some which are shared by both husband and wife. Allah says:

“Indeed, Allah has heard (the) speech (of one) who disputes with you concerning her husband and she directs her complaint to Allah. And Allah hears (the) dialogue of both of you. Indeed, Allah (is) All-Hearer, All-Seer.” (Surah Al-Mujadilah 58:1)

It is a great blessing of Allah SWT, which is a relationship of love, understanding, and cooperation. In the modern age, the status of men and women is often the topic of arguments or discussions. Islam has given a great focus on a balanced and ethical marriage that leads to happy families and married couples. Allah says:

The Quran and Sunnah indicate that the husband has a confirmed right over his wife and that she is commanded to obey him, treat him well and put obedience to him above obedience to her parents and brothers. Indeed, he is her paradise and her hell. For example,

Allah says (interpretation of the meaning):

1. HUSBANDS ARE THE GUARDIAN OF THEIR FAMILIES

Women and men are the wheels that make a vehicle work – however, men are given a larger portion of qualities that make them stronger in terms of guarding their families. Islam has given men the responsibility of supporting their women and their families.

According to our Prophet (PBUH), “Men are the guardians of their families and it is the responsibility of every guardian to guard those who fall under his guardianship.” (Mustadrak, vol 2, p 550)

2. BE MORE LOVING AND CARING TO YOUR WIFE

A man should understand that the woman he marries also has her rights and desires towards her life, freedom, and expectations from his husband – she must not be taken as a servant. Therefore, it is important that he meets the requirements of his wife, while a wife meets her set of requirements.

The secret behind the prosperity of a family is the way a husband treats his wife and vice versa. The expression of affection towards your wife is your responsibility, according to Islam. Islam values the sacrifices women make and therefore, Allah blesses love between a married couple for the betterment of their life: Allah says:

“..And one of His signs is that He created mates for you from yourselves that you may find rest in them and He put between you love and compassion; most surely there are signs in this for a people who reflect.” (Quran 30:21)

Islam has strictly forbidden the beating of a wife, while our culture continues to abuse women physically and mentally. On the other hand, even looking at each other with love brings blessings and joy to the relationship.

3. BEING THERE FOR WIFE DURING PREGNANCY

There is no argument on how modern-age men sometimes disregard the importance and pain during pregnancy and treat it as an “ordinary” condition. However, Islam has given great significance to this matter as well.

During this sensitive matter, it is not just a test for the wife alone, but also the husband as they will be giving birth to their future generation.

4. BRINGING UP CHILDREN WITH TOGETHER YOUR WIFE

Men and women play their part in giving birth to the fruit of the marriage – children. Often our society dumps the matter of bringing up children on the wife alone while ignoring that a father is equally responsible for this duty as well. It is your right to help your wife as well as an act of kindness.

Prophet (PBUH) said, “‘The best of men is one who treats his wife well and I, amongst you, am the best man about the good treatment of my wife”—(Wasa’il al-Shi’ah, vo114, p 122). It is an ethical, human and Islamic duty of both parents to properly bring up their children to raise good Muslims and family members.

The Prophet (PBUH) also said, “The best of you is the one who is better towards his family, and I am to my family the best among all”– (Wasa’il al-Shiah, vol 14. p 122). While these may sound like very basic rights, our society tends to ignore them, leading to several domestic quarrels that are not ideal for families.

“And certainly, We sent Messengers before you and We made for them wives and offspring. And not was for a Messenger that he comes with a sign except by the leave (of) Allah. For everything (is) a time prescribed.” (Surah Ar-Rad 13:38)

Islam maintains the unity of the marriage not to be broken in many ways. Still, the different personalities which are influenced by surroundings sometimes caused disputes inside of the household life. There are many triggers caused by conflicts in a household whereas the main conflicts come from the miss understanding and intolerance between the couple. A husband role here is as captain of a household, he has a big impact to give a good direction to his family whether in a good direction or a bad direction.