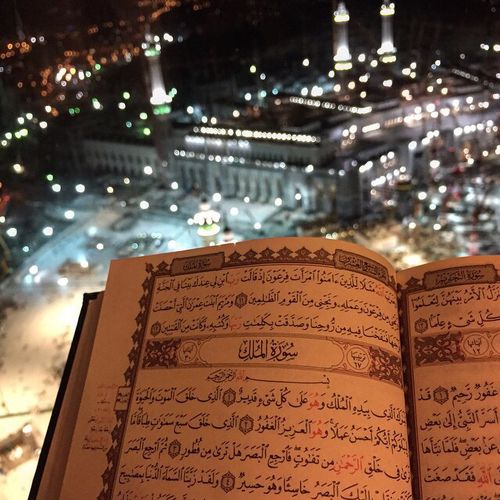 In the Quran, Allah Almighty has clearly stated His authority and mentions time and again that everything and every bounty of the world are from Him and He ought to be invoked for everything. The Quran is full of verses that talk about Allah as “The Creator” and the word of Allah is the Absolute Truth. It is true that Allah knows all that is in our hearts. Allah’s knowledge compasses all things, as does His mercy and wisdom. Allah says:

“When adversity touches you at sea, lost are all those you invoke except for Him. But when He delivers you to the land, you turn away from Him. Ever is man ungrateful.” (Surah Al-Isra 17:67)

The best way to know Allah and to understand His actuality is through His ‘best’ names and attributes His Being comprises of – these attributes find perfection solely through and in His Being.  Allah Almighty is known to Muslims as the Most Merciful Being, it is only because of His mercy that even when we commit sins, He lets them go and gives us many chances. Allah says:

The universe must necessarily have a Creator because it is impossible for the universe to have created itself or to have been created by nothing. Therefore, there must have been a Creator who provided the initial force and energy needed to set the universe in motion. This is sometimes called the cosmological argument.

Muslims believe that Allah is the all-powerful Creator of a perfect, ordered universe. He is transcendent and not a part of his creation, and is most often referred to in terms and with names that emphasize his majesty and superiority. Moreover, the vast majority of human beings throughout history and across religious traditions have affirmed the existence of the Almighty Creator. It is simply part of our nature to recognize these signs because Allah has created us this way. Allah says:

“If you asked them: Who created the heavens and earth? They would surely say, Allah. Say: All praise is due to Allah, but most of them do not know.” (Surah Luqman 31:25)

Allah is the Giver of life and it is only through His grace that we breathe as we do and are able to function in our daily lives. Human nature also recognizes objective moral values shared across religions and cultures throughout time, known to philosophers as “natural law.” This is sometimes called the moral argument. Remembering God is thus the life force of faith, without which it fades and withers away.

The Oneness of God in the Quran:

It might be asked why some people disbelieve in the Creator if sound human nature inclines toward faith. The answer is that Allah has created life as a test involving various influences such as the temptations of Satan and selfish desires. Although human nature inclines toward faith, a person must ultimately choose to pursue faith in the Creator over the influences of unbelief. Allah says:

“Were they created by nothing, or were they the creators of themselves? Or did they create the heavens and the earth? Rather, they are not certain.” (Surah At-Tur 52:35-36)

Thus, from the sun and the moon in the heavens to the creatures on the earth to the innermost parts of the human being – all of these point to the power and deliberate design of the Creator. It is human instinct (fitrah) to recognize these signs as evidence of the Creator’s purpose. Allah says:

“We will show them Our signs in the horizons and within themselves until it becomes clear to them that it is the truth. But is it not sufficient concerning your Lord that He is, over all things, a Witness?” (Surah Fussilat 41:53)

According to the Qur’an, God’s divinity cannot be shared or divided. Everything and everyone other than God is merely His creation and servants. Spiritual development brings the servant closer to God, but it can never bring him close to divinity. It rather confirms his servanthood. Being nearer to God means getting closer to becoming the perfect Muslim, and the latter is one who has attained complete surrender and submission to God. Allah says:

‘Say: Who rescues you from the darkness of the land and sea when you call upon Him imploring aloud and privately: If He should save us from this crisis, we will surely be among the thankful. Say: It is Allah who saves you from it and from every distress, yet you still associate others with Him.” (Surah Al-An’am 6:63-64)