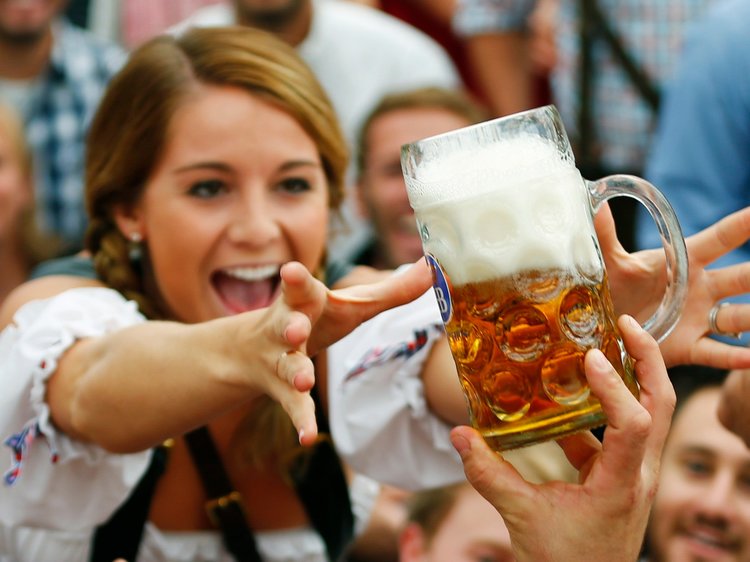 Islam takes the determined stand towards alcohol and forbids its consumption in either small or large quantities.  Alcohol is the thirteenth among the Greater Sins in the religion Islam. Drinking alcohol can cause permanent damage to memory and learning ability. It darkens the mind, causes disease, wastes money, and destroys individuals, families, and communities. Allah says:

“They ask you about [the] intoxicants and [the] games of chance Say, “In both of them (is) a sin great, and (some) benefits for [the] people. But the sin of both of them (is) greater than (the) benefit of (the) two.” And they ask you what they (should) spend. Say, “The surplus.” Thus makes clear Allah to you [the] Verses so that you may ponder,” (Quran, 2:219)

Drinking alcohol and other intoxicants cause hundreds and thousands of people to die every year from illnesses brought about by alcohol and drug abuse. Drinking Alcohol drives people to do acts that they would never consider otherwise.

Here are some reasons why Muslims don’t drink alcohol:

1. Alcohol and prayer do not mix: Prayer (salat) is a fundamental part of the Muslim lifestyle, an obligatory call to God five times a day. A ritual eco “wudhu” (woo-dhoo) is necessary before the prayer which involves a water-saving ablution to spiritually connect to the environment, health, and creation. The presence of alcohol in the same room does not affect the prayer, according to Islamic scholars, but anyone who drinks alcohol cannot pray for a month unless he or she repents.

2. It’s addictive: Even when the early Muslims recognized alcohol for its medicinal uses, Prophet Muhammad likened the drink to a “disease”, saying there is no cure in things that God has forbidden. Like the first puff of a cigarette, it is up to individual willpower to continue or stop drinking.

3. Liquor clouds the intellect: Khamr also describes how alcohol consumption makes it difficult to differentiate between right and wrong. The Muslim faith is founded on intellect, rational thought, and good judgment. Anything that could jeopardize this behaviour is forbidden, and another reason why Muslims don’t drink.

4. It gives the wrong message to children: Sitting in a restaurant where alcohol is served is not the same as drinking it. This is why Islamic law has the flexibility to say if someone needs to sit in such a restaurant for a work meeting or because no other diners are available, he/she can, but should not sit at a table where alcohol is served. On that note, fins local halal restaurants with Zabiha.com’s world halal guide.

5. Alcohol makes one forget: Any intoxicating substance, whether it’s wine, beer, gin, whiskey or drugs, affects a person’s faculties and behaviour. The result is the same, and the Quran outlines that it is the intoxication-which makes one forgetful of God and prayer-that is harmful.

6. Alcohol can lead to criminality: Although a controversial statement, in Islam alcohol, is viewed as the “key to every evil” (hadith), because of its close relation to creating or making criminal behaviour easier to commit. That isn’t an omission of the medicinal uses of alcohol, but to say that prevention is better than a cure. Thus, the Quran explains, “(in alcohol) there is a great sin, and (some) benefits, but the sin outweighs its benefit)” (2:219).

7. Alcohol the mother of all sins: Just as there lies great wisdom in the gradual revelation of laws prohibiting alcohol, there is also wisdom in the strait enforcement of severe punishment for drinking alcohol. Therefore, the Prophet (PBU) referred to alcohol as the mother of sins because after consuming it, man can indulge in other major sins.

“…The devil wants only to cast among you enmity and hatred using strong drink and games of chance and to turn you from remembering Allah and from prayer. Will you then desist” (Surah Al-Ma’idah, 5:90).

The three verses concerning alcohol in the Quran were revealed in the following chronological order:

“They question thee about strong drink and games of chance. Say: In both is a great sin, and (some) utility for men; but the sin of them is greater than their usefulness…” (Quran 2:219)

Step 2 – Praying while intoxicated is prohibited

“O ye who believe! Draw not near unto prayer when ye are drunken, till ye know that which ye utter … “(Quran 4:43)

Step 3 – Complete prohibition by asking Muslims to abstain from consumption

Muslims don’t do drugs: All intoxicants were made haraam in Islam’s religious scripture at different times over years. Over the years, the list of intoxicating substances has come to include more modern street drugs and the like. Islam prohibits the use of narcotics noting that “every intoxicant is haraam (unlawful)”. ‘Recreational’ drugs have become the social culture despite religious prohibitions.

Buying and selling wine: For Muslims, when something is made haraam, this means that thing is harmful to one’s health and contribution to the community. That also means Muslims aren’t supposed to encourage others to consume in any haraam, irrespective of who they are. The Prophet Muhammad forbade people from all actions related to the wine industry, including pressing wine, drinking it, serving it, selling it or buying it.

The fact is that people crave happiness and they will find it in whatever form they know. For Muslims, there is no need for drugs or strong drinks. Happiness comes from strong family values and for the respect which we give to each other as true brothers and sisters. The real happiness in life, though, comes from Almighty Allah, the source of all goodness.