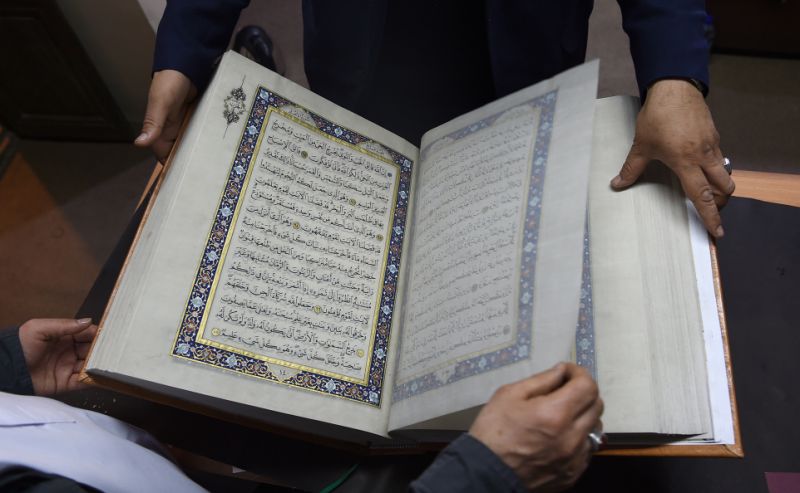 In the religion of Islam, belief in Allah is the single most important tenet. In Arabic, Allah means literally the one God. It is pretty easy to understand how different languages give the same thing different names. Is it that unusual to hear Muslims call God another name, like “Allah”, while He is also called God or Lord? Muslims believe that Muhammad was Allah’s chief servant and messenger. Allah says:

“It is He who created the heavens and earth in six days and then established Himself above the Throne. He knows what penetrates into the earth and what emerges from it and what descends from the heaven and what ascends therein, and He is with you wherever you are. And Allah, of what you do, is Seeing.” (Surah Al-Hadid 57:4)

The fundamental pillar of faith in Islam is to declare that “there is no deity worthy of worship except the One True Almighty God” (in Arabic: “La ilaha ill Allah”). Allah says:

In the Quran, we read that Allah is Compassionate and Merciful. He is Kind, Loving and Wise. He is the Creator, the Sustainer, the Healer. He is the One who Guides, the One who Protects, the One Who Forgives. There are traditionally 99 names, or attributes, that Muslims use to describe Allah’s nature. In Muslim understanding, God is beyond our sight and understanding, yet at the same time. Allah says:

“What would Allah do by punishing you if you are grateful and you believe? And Allah is All-Appreciative, All-Knowing.”.(Surah An-Nisa` 4:147)

When asked who is Allah, some non-Muslims mistakenly think that He is an “Arab god,” a “moon god” or some sort of idol. Allah is the proper name of the One True God, in the Arabic language used by Muslims all over the world. Allah is a name that is neither feminine nor masculine, and it cannot be made plural (unlike god, gods, goddess, etc). Muslims believe that there is nothing in the heavens nor on Earth that deserves worship except Allah, the One True Creator. Muslims pray directly to God, with no intermediary, and seek guidance from Him alone. Allah says:

“And remember (the) Favor (of) Allah upon you and His covenant which He bound you with [it] when you said, “We heard and we obeyed;” and consciously revere Allah. Indeed, Allah (is) All-Knower of what (is in) the breasts.” (Surah Al-Ma’idah 5:7)

Tawhid – The Unity of God

Islam is based on the concept of Tawhid, or Unity of God. Muslims are strictly monotheistic and fiercely reject any attempt to make God visible or human. Islam rejects any form of idol worship, even if its intention is to get “closer” to God, and rejects the Trinity or any attempt to make God-human. Allah says:

Allah is the Creator and Judge of mankind, the Omnipotent, the Omnipresent, the Compassionate, the Merciful. What are the basic attributes of Allah? In total there are ninety-nine of the “most beautiful names” (or attributes) of Allah. Allah says:

“He (is) the One Who sends down upon His slave Verses clear that He may bring you out from the darkness[es] into the light. And indeed, Allah to you (is the) Most Kind, (the) Most Merciful.” (Surah Al-Hadid 57:9)

The Saviour, the Knower of All, Hearer of All, the Seer of All, the Judge, the Just, the Magnificent, the Forgiver of Sins, the Highest, the Greatest, the Preserver, the Mighty, the Generous, the Watchful one, the Responder to Prayers, the Perfectly wise, the Majestic one, the Resurrector, the Truth, the Possessor of all strength, the Ever-living one, the Self-existing one, the all-Powerful, the Supreme One, the Patient one and the Guide to all repentance, etc. Allah says:

“He (is) Allah, the One Who, (there is) no god but He, the Sovereign, the Holy One, the Giver of Peace, the Giver of Security, the Guardian, the All-Mighty, the Irresistible, the Supreme. Glory (be to) Allah from what they associate (with Him).” (Surah Al-Hashr 59:23)

Whenever a believer is in need or distress calls on Him, He responds. By their emphasis on reason in establishing religious truth, the rationalists, the modernists, and the Jahmites assert the preeminence of reason over the divine revelations. Whereas the Loftiness of Allah which is clearly enunciated in the Qur’an and the Sunnah is beyond the reach of reason. Allah says:

If Allah is everywhere, as the deviated sects allege, why then the above verse does not read, ‘Declare your Rabb, (around you), (below you), or (everywhere)?

The linguistic analysis of this verse proves the following points:

A manifestation of the wisdom and mercy of the Creator, who created the world so that He would be known, as a stepping-stone towards the greater life to come in the Hereafter. The spiritual path does require, however, a sustained and patient effort to seek out the truth, to answer the most important existential questions, and to remove specious doubts.