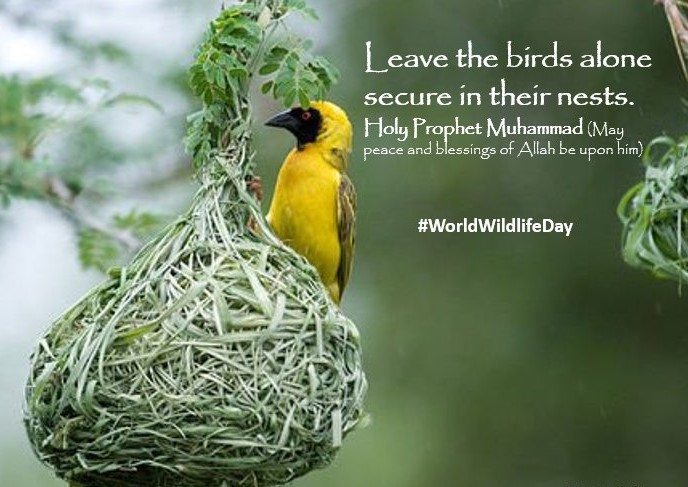 The religion of Islam has always viewed animals as a special part of God’s creation. There are three living creatures in the world: human beings, animals, and plants. Among those three beings, the human is the most perfect. Thus, human being has more responsibility for the lives of the other two since they are the only ones who are capable of it. There come great rewards for Allah SWT to a whoever human who shows generosity by feeding animals. Allah says:

“My Lord, show me how You give life to the dead.” He said, “Do you not believe?” He said, “I do! But this is so my heart may be calm.” He said, “Then take four birds and draw them to you. Then place a part of them on each mountain. Then call them; they shall come to you in a rush. And know that indeed Allah is overpowering, all-wise.” (Surah Al-Baqarah, 2:260)

Prophet Muhammad (peace be upon him) was a guidebook for Muslims when it comes to attitude, way of life, worshipping Allah SWT, and any other aspects in life. Allah SWT command us to follow every step he took as he is the most excellent guide for all Muslims. Feeding the birds means we also follow the Sunnah of the Prophet, and gain favour from Allah SWT at the same time. Allah says:

“You have in the Messenger of Allah an excellent exemplar for him who hopes in Allah and the latter-day and remembers Allah much.” (Surah Al-Ahzab, 33:21)

Islam forbids treating animals cruelly or killing them except for food. Muhammad often chastised his companions, or followers, who mistreated animals and spoke to them about mercy and kindness. Here are examples from the hadith that instruct Muslims how to treat animals:

“Do not you see that Allah – glorify Him whoever (is) in the heavens and the earth and the birds (with) wings outspread? Each one verily knows its prayer and its glorification. And Allah (is) All-Knower of what they do.” (Surah An-Nur 24:41)

Birds are animal that has a long history in Islam. In the past, when Abrahah was attacking Mecca and aimed to destroy Kaaba, Allah SWT sent an army of Ababil birds that held deadly volcano stones from Hell as help. As birds had been very useful for Islam, there are many benefits of feeding birds in Islam.

Here are some benefits of feeding birds in Islam:

As human beings, we should be useful for other living creatures in the world. Thus, our existence will be beneficial. Other than that, the Prophet (peace be upon him) was someone who loves animals dearly, so to embody his generous spirit we should do the same thing too. That is the reason why we created the most perfect being in the world. Allah says:

“And not [of] any animal in the earth and not a bird (that) flies with its wings – but (are) communities like you. We have not neglected in the Book [of] anything, then to their Lord, they will be gathered.” (Surah Al-An’am 6:38)

It has become our undeniable obligation to take care of other living creatures in the world. We should never hunt an animal and kill them roughly nor do we kill plants by burning the forest or cutting them down. Since none of them can take revenge on humanity, we will severely sin if we are not taking care of them. The believer strives to be one of benefit to all creation, embodying the spirit of the prophetic person himself (Allah bless him and give him peace). Allah says:

Doing a good deed is very easy and we have so many ways to do good deeds. One of them is surely feeding the birds and other animals. Feeding the birds can be the first interaction with nature for our kids. Later on, they will have no fear of getting close to other animals. There are great rewards for feeding animals and being merciful to the creation of Allah. Doing so would be considered a form of charity (sadaqah).