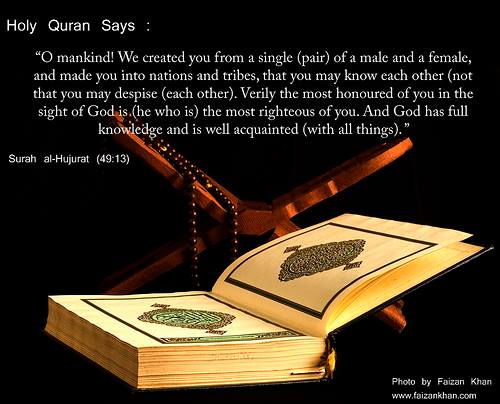 “And (even) if [that] We (had) [We] sent down to them the Angels and spoken to them the dead and We gathered before them everything faces to face, not they were to believe unless [that] Allah wills. But most of them (are) ignorant.” (Surah Al-An’am 6:111)

Qur’an is the only book that has had and still carries an unparalleled effect on human thought, ethics, morality, civilization, and mode of living. It first affected a group of people and as they rose built a polity and affected others, brought them uniquely together into an Ummah- and set a golden era in the history of humankind.

In the Quran, every word is based on truth and there is nothing but the truth in the Quran. It is the word of Allah, therefore, it is a part of the Muslim belief that there can be nothing false or based on a lie in it. In the Quran, Allah Almighty puts this claim to challenge by saying:

“And if you are in doubt as to what We have sent down to Our servant, then produce a Surah similar to it, if you are truthful. But if you do not do it and of a surety, you cannot do it then fear the Fire whose fuel is of men and stones, prepared for the disbelievers.” (Surah Al-Baqarah 2:23)

Qur’an’s subject matter is vast and comprehensive – encompassing the entirety of existence from initial stages into its future. It discusses the reality of the universe, its beginning and end, its make-up and its organization.

Another miraculous aspect of the Quran is that it is the most authentic nature of it which is an open challenge to all those who doubt its authenticity. When Prophet Muhammad (PBUH) recited the Quran to the non-believers, they rejected it by saying its something magic or something, which is created by him. To such people Allah Almighty says in Quran:

“Or do they say, He (Muhammad) has forged it! Say: Bring then a Surah like unto it and call upon whomsoever you can, besides Allah, if you are truthful.” (Surah Yunus 10:38)

All such doubters are challenged to produce a single Surah like Quran no matter whichever help they seek and whomever they consult. It delineates the correct human conduct to accord with his rightful position, and what would violate that position.

Quran contains predictions, which by far have come to be true and would stay the same in future as well. The Qur’an covers the subject matter of this vast area with an assured certainty because its author is the one who has full knowledge of reality, observes all there is and knows all of the facts. Allah says:

“So today We will save you in your body, that you may be for (those) who succeed you a sign. And indeed, many among the mankind of Our Signs (are) surely heedless. ” (Quran 10:92)

In this ayah, Allah Almighty tells of an incident that had passed more than a thousand years before Islam and the Quran. It was the drowning of Pharaoh in the river Nile. Allah tells that He preserved his body so that he could stand as a sign to those who are heedless and do not listen to the orders of Allah. As per Quranic prediction, the mummy of his was discovered a few centuries ago, again asserting the fact that whatever the Quran has predicted is true and absolutely true. Allah says:

“And thus We made for every Prophet an enemy – devils (from) the mankind and the jinn, inspiring some of them to others (with) decorative [the] speech (in) deception. But if your Lord had willed they (would) not have done it, so leave them and what they invent.” (Surah Al-An’am 6:112)

In fact, the Qur’an charts out a comprehensive scheme of life that encompasses beliefs, ethics and morality, acts of worships, culture, civilization, economics, politics, law and all other areas of human activity – which fit together harmoniously constituting a wholesome system of life for the betterment of humankind. The entire world is like an open book to Him, not only from its beginning to its end but after its end into another world – all at the same time. His guidance for humankind is not based on conjecture and speculation, but on the knowledge that is certain, without any doubt whatever.