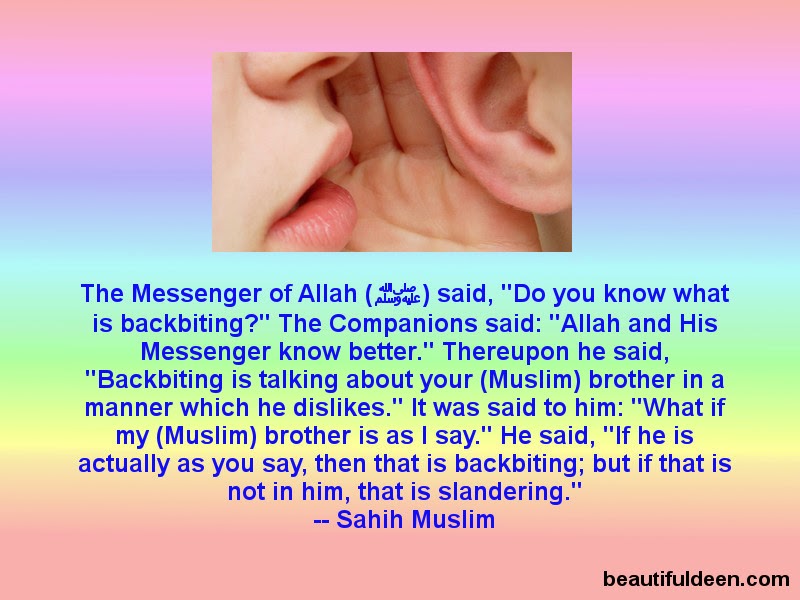 Islam teaches us and emphasized on to give respect to other Muslims honour. Backbiting is a serious sin in Islam. A sin that, unfortunately, many Muslims have come to normalize in their day to day interactions. Backbiting is so widespread that they have become the topic of people’s meetings and an avenue for expressing their anger, misgivings, and jealousy. Backbiting is, however, one of the meanest manners and most serious crimes and sins. Allah says:

Backbiting is to speak ill of a believer behind his back, including matters concerning his moralities, appearance. Those who indulge in backbiting are oblivious of the fact that they are only harming themselves. The act of backbiting is greatly condemned in the eyes of Allah. It is necessary to avoid being in conformity with the backbiters or listening to them, for the listener of backbiting is regarded as a partner in the sin. Allah says:

Many people may not be aware that they are falling into the sin of backbiting, because to them, they may just be innocently sharing information that they heard, or telling someone about another person’s wrongdoings that may or may not have affected them personally. If you hear a rumour about someone’s misfortune, strive for compassion rather than continuing the gossip. Remind others not to gossip, and if they don’t listen, walk away. Allah praised such action in the Quran: Allah says:

“Do not concern yourself with things about which you do not know. Verily, your hearing, sight, and heart — all of them will be called to account.” (Surah Al-Isra 17:36)

Islam is a religion of peace, love, and compassion. Lies, suspicion, backbiting, slander, and gossip are alien to Islam. They are considered amongst the most destructive of major sins. This is so because these sins sow enmity and discord among the Muslim Ummah (nation) and lead to its destruction. They cause hostilities between people of the same household, and between neighbours, friends, and relatives. Allah says:

“O you who believe! If comes to you a wicked person with information, investigate, lest you harm a people in ignorance, then you become, over what you have done, regretful.” (Surah Al-Hujurat 49:6)

Islam demands that our relationship with mankind be one of sincerity and responsibility. It should be one where we have respect for the honour, reputation, and privacy of others. Islam teaches us that we are not only held accountable for our attitudes and actions, but also for anything over which we have control or influence in our society or the world around us. Allah says:

Backbiting is a graver sin than one can imagine; if only one understood the repercussions of engaging in backbiting, one would steer clear of it and actively work towards avoiding it. This is because, on the Day of Resurrection, both the wrongdoer and the wronged will stand before Allah, the Just Judge. Allah will then give the wronged person the good deeds of the person who wronged him by backbiting or other injustices.

Here are a few tips to help us keep away from backbiting and all that it entails:

Take preemptive measures; avoid places and gatherings where you know people get together to discuss other people. Steer clear of people who are in the habit of gossiping and spreading false rumours/assumptions about those around them. Backbiting is a toxic phenomenon, which only festers negativity, jealousy, and envy in the hearts of men. Find people who are more like-minded and who do not depend on gossip to pass the time. Allah says:

Sometimes, we may have a legitimate reason for wanting to speak about another person’s wrongdoings, and these situations are mostly divided into the following:

“And when they hear vain talk, they turn away from it and say, “For us our deeds and for you your deeds. Peace (be) on you; not we seek the ignorant.” (Surah Al-Qasas 28:55)

Many of us backbite and gossip without thinking. We think it is a minor matter, however, Allah reminds us to be careful, for even though we think we are doing something small, it is very large in the sight of Allah! Many people are so busy spreading the slander they hear that they do not even stop to consider whether it is true or not. Allah says:

Islam teaches us that if people are being ridiculed or backbitten in our presence, we should defend their honour. If we neglect doing so, we risk depriving ourselves of the ever-needed help and mercy from Allah. Deriding people in their presence by making negative facial expressions or by hand gestures while they are unaware of is also a form of backbiting. Allah says:

“Those who criticize the ones who give willingly of the believers concerning the charities, and those who not find except their effort, so they ridicule them, Allah will ridicule them, and for them (is) a punishment painful.” (Surah At-Taubah 9:79)

The evils of backbiting in Islam are deep and far-reaching as they cause nothing but enmity and suspicion between people, destroys ties of kinship and turn people against one another. To build a strong Ummah, we should do our best to honour the rights of our Muslim brothers by not backbiting them. May Allah guide us all towards the right path and protect us from the trials and punishments in this life and the next. Amen