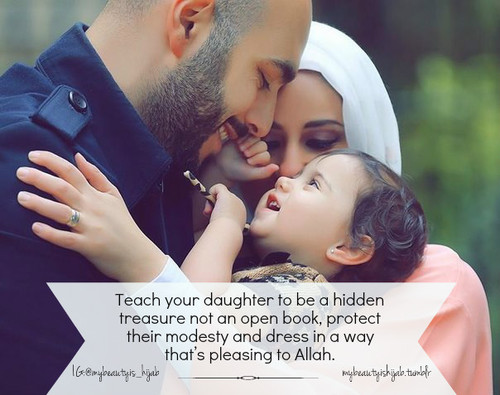 Daughters are a great blessing because Allah has promised a place in paradise (Jannah) on bringing them up. The one who has 3 daughters or sisters, or 2 daughters or sisters and he brings them up properly and fears Allah regarding their rights, then Paradise is made mandatory for him. Daughters are without a doubt a great blessing from Almighty Allah. They are a means of salvation and a path to Jannah (Heaven) for their parents. The crux of one narration states that. Allah says:

“And when is given good news (to) one of them of a female, turns his face dark and he suppresses grief.” (Surah An-Nahl 16:58)

Children are no doubt a great gift from  Allah to all parents. Parents must think of their children as such treasures that all the wealth and material resources are worthless when compared to one’s children. We, as parents, should thank and be grateful to Allah for blessing us with children whether they are boys or girls. Daughters are a gift from Almighty Allah. Allah says:

“Will come (the) command of Allah so (do) not (be) impatient for it. Glorified is He and Exalted (is) He above what they associate.” (Surah An-Nahl 16:1)

Rights and responsibilities of Daughters In Islam:

Daughters are the blessing of Allah Almighty. Before the advent of Islam, girls were treated very badly in Arab society. The Father of a daughter used to feel shame when a girl was born to him. Arab society used to bury girls alive to get rid of the shame.  At the time of darkness when people used to treat girls very badly, Allah says:

“Certainly, (are) lost those who killed their children (in) foolishness without the knowledge and forbid what Allah has provided them – inventing (lies) against Allah. Certainly, they have gone astray and not they are guided-ones.” (Surah Al-An`am 6:140)

Rights and Duties of Daughters

Islam came into being and granted rights to women as a daughter, sisters, and wives. Islam also created some responsibilities for them which are mentioned below:

“And when the female infant buried alive is asked.” (Surah At-Takwir 81:8)

When a family has daughters, it doesn’t matter how many did they have. The blessing for the parents from Allah SWT is the same. Even if a Muslim has only one daughter, he will enter Jannah along with a Muslim having two or three daughters. If someone raises his daughter well until she got married, Allah SWT makes Jannah compulsory for him. The obligation of parents will end once the daughter got married. Allah says:

Having a daughter is a great blessing for the afterlife, as not only Jannah is guaranteed but the parents also distanced from the Hellfire ever since the day she was born. Prophet Muhammad (SAW) once said that when a daughter is born, she creates a five hundred years distance between her parents and Hell. May Allah protect all our daughters and sister and blessed them with all the happiness of the world. Ameen!