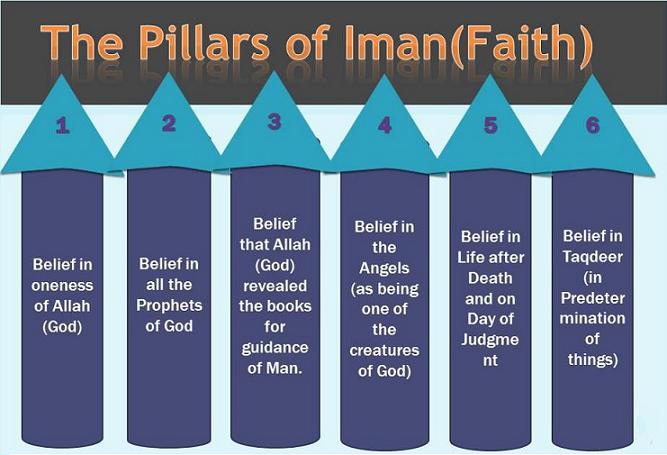 Iman in Arabic means faith or to strongly believe in something. To a person, faith is the confidence of themselves to rely on something not only to confess the truth but implement it in their daily life sincerely. According to our Prophet Mohammed in the hadith that told Iman is a knowledge in the heart, a voiced tongue, and limbs activity. So that when the person has a faith (of Islam), then he not only acknowledges his heart but also by saying and daily activities.

Here is the information about the six pillars of Iman in Islam, as follows:

1. Believe in Allah, the only God

The first pillar of Iman as the foundation is believing in Allah as the only God. Allah in Arabic means God for Abrahamic Religion, and commonly Allah is referring to God in Islam. The name is derived from Al-Ilahi which is the same meaning as God. In Islam, believing in Allah is called Tawhid.

The one and only God are Allah. Allah is the only one eternally. He does not have a descendant or even being born. Those who consider God into a thing beside Him then it considers as shirk and accused to be the unforgiven sin. Meanwhile, in the Quran, there are 99 names dedicated to Allah as define the character namely Asma-Ul-Husna. It has the meaning of a beautiful name, as quoted in the Quran. Allah says:

It means that when we start to do some activities including prayer, as well as when we begin the recitation of a surah, we remember Allah which is the Beneficent and the Merciful.  It is clearly said that the God of Islam is very Merciful, very Compassionate loving with all of the creatures. As mentioned in Asma-al-Husna that Allah is the Great Forgiver (Al-Ghaffar), the Guardian (Al-Hafiz), the Protector (Al-Muhaymin), so that Islam teaches for loving, kind, gentle, humble and forgiving to all of the human beings, for pleasing their God with all of the characters. Allah says:

Angels are from the world of the unseen.  They were created to obey the commands of Allah and they never transgress His laws or commands. Here is the description of the Angels with verses from the Qur’an: Allah creates angels from pure light before the creation of Adam. They do not eat as well sleep, they are free from weakness, and don’t get the illness. They are created for obeying Allah’s command and worshipping Him.

The following is the names of the angels including their task:

3. Believe in the Holy Quran

Allah guided people in a particular area who had almost lost their piety and morals. He revealed several divine revelations via His messengers which were blessed by knowledge, wisdom, and faith to One God. The books guided people to understand that Allah is the One and there is no God but Allah, the command to worship only Allah without exception. It also explains about life after death and obeying the Messenger, and if they do not do that, God will give any punishment no matter what.

The holy books given by Allah are mentioned:

Moslem believe all of the revelations from God given to Prophets. They believe for all Holy Books is existed, but nowadays it is hard finding the original one since the Books has a lot of change. However, Moslem must follow the last revelation from God which is given to Mohammed, the Quran. Quran was given by revelation to Prophet Mohammed (PBUH) by God not only to a certain tribe or nation but also to all of humankind in the world. Allah says:

“He revealed to you the Book in [the] truth confirming that which (was/among) before it, and He revealed the Taurat and the Injeel.” (Surah Ali Imran 3:3)

Quran is revealed by Mohammed firstly in Hira Cave brought by Angel Gabriel   (Jibril) when he was 40 years old. At times he was secluded from the outside world which at that time many people were worshipping the idol. It was the last Ramadhan then it is known by Layla-ul-Qadr (the night of power). Allah says:

During his meditation, The Angel Gabriel appeared and asked him to read. Since Mohammed was illiterate, he was rejected. The angel pushes him and squeeze him until surrendered, then finally obey what the angel asked. It is the first time Prophet Mohammed had a revelation as a quote in the Quran; Allah says:

Quran is the last message of God revealed to the last Prophet as the Messenger of Allah. All Moslems believe that it is the truest word of Allah brought by Gabriel to the Messenger. The Prophet Mohammed was illiterate which he could not write in but send to his companions and recorded by writing it down. The companions then recited back to the Prophet to ensure that the content of revelation given by God was correctly scripted.

“And your Lord (is) most knowing of whoever (is) in the heavens and the earth. And verily We have preferred some (of) the Prophets to others. And We gave Dawood Zaboor.” (Surah Al-Isra` 17:55)

Quran consists of 114 chapters (surah), the length has more than 200 verses to come chapter which only 3 chapters, and divided into 30 parts (Jooz). The prophet had revealed the Quran for about 23 years. The Quran was revealed in the Arabic language, transcripted in Arabic and spread all over the world and recited by the Moslems also in Arabic and has been translated in the various language in every country. Allah says:

In Islam, it is a part of faith to believe all the books that were revealed to the messengers. There have been many scriptures revealed throughout the history of mankind. Allah tells us about a few of the names of the scriptures in the Qur’an. Muslims should recite the Quran in Arabic for it refer to the original language, for gaining a greater sense of the true meaning, since the translation has various interpretation in a different language.

4. Believe in Prophets of Allah

All Moslem believe in the Prophet and Messenger of Allah. They are the gifted human that received a revelation from God, which is guiding mankind into morality and goodness and the main point is believing that God is the only the Creator of this universe. Humans must worship Him and follow His order and leave the restrictions. Allah says:

The former messengers of Mohammed were ordered to send God’s revelation to each nation, for worshipping only one God (Allah). However, Mohammed as the last Messenger was appointed for all of mankind because the Quran is designed to fit for all human beings to believe in Allah.

There are many prophets sent by Allah but quoted in the Quran is only 25 prophets (as well mentioned in the Bible):

5. Believe in the Judgement Day

Muslims must believe in the judgment day when Allah terminate creating all creature and human being. After all, destroy and finally dead, He will raise all of mankind and lead them back to Him. All of the good and bad deeds will be valued by Allah. Muslims believe the doomsday and the sign of it as predicted in the Quran and Hadith. Allah says:

“Will know a soul what it has sent forth and left behind.” (Surah Al-Infitar 82:5)

The signs of doomsday are told that the appearing of Dajjal, the Appearing of Imam Mahdi, Isa (Jesus) went down to the world (as he directly went to the heaven and never die), and the appearance of Ya’juj and Ma’juj. Allah will count our deeds during the world life and scale them. Allah says:

The weight of the deed will be followed by a revelation of the person’s deed of the note during in the life. The person who has a good deed in the right hand, he will be promised of heaven, while on the contrary, the bad deed one will be thrown into hell. Heaven and hell are described in Quran recitation, as quoted. Allah says:

“Gardens of Eden, they will enter them and whoever (were) righteous among their fathers and their spouses, and their offsprings. And the Angels will enter upon them from every gate.” (Surah Ar- Raad 13:23)

Heaven describes the beautiful garden which we cannot only imagine because it is beyond that. So whoever obey and worship God a lot, then the Angels will open them in every gate. On the contrary, those who don’t believe and reject to believe Allah, and for the sinner, for the bad deed is more than good ones will punish to enjoy the fire of hell. God warned it through the Quran. Allah says:

For when will the day of the doomsday be the only ones He knows. People still have a lot of chance before the death to believe Him and obey His command, with a lot of worship and remembrance of Allah. Allah says:

Allah has recorded all that happened in the very beginning of life until the final day of the world and keep into the Al Lawh Al-Mahfuz. As mentioned in the Quran. Allah says:

“Do you not know that Allah knows what is in the heaven and earth? Indeed, that is in a Record. Indeed, for Allah, is easy.” (Surah Al-Hajj 22:70)

We must believe in the predestination of Allah about the event (Qadaa) and the fate (Qadar) according to His will. If God wishes to occur then it will be, but He doesn’t then it does not occur at all. Allah knows what people do not, nothing occurs except His will. Allah says:

However, Allah gives humans free will and destiny does not cause influence human choices. Allah does not judge for the action and event of human-made beyond the control. Human has free to decide what the best for life but Allah define it. Thus the six pillars of Iman in Islam. Hopefully,y the article will give the benefit and knowledge of Islam.