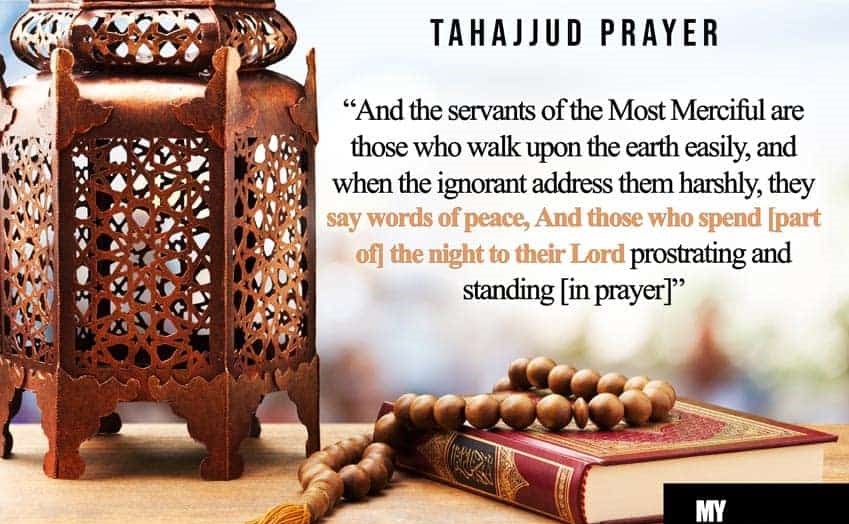 The midnight prayer means the Tahajjud prayer. Tahajjud” is derived from “Hujud”, meaning sleep. Tahajjud signifies giving up sleep. The prayer was observed by the Holy Prophet (p.b.o.h.) from midnight up to the appearance of the early dawn. The night is the time to prostrate before the Divine Being with love and affection for the sake of pleasing Him instead of lying down in smooth beds. Therefore, extra prayers performed at night are of great importance in achieving immediacy with Allah. Thus, one desires and performs prayers at night as much Divine Love as s/he has.

“The part of the night they spent asleep was small.” (Surah Adh-Dhariyat 51:17)

“Establish the prayer, at the decline (of) the sun till (the) darkness (of) the night and Quran at dawn, indeed, the Quran (at) the dawn is ever witnessed.” (Surah Al-Isra 17: 78)

“And from the night arise from sleep for prayer with it (as) additional for you; it may be that will raise you your Lord (to) a station praiseworthy.” (Surah Al-Israa’ 17:79)

And when he woke up from his sleep, he would say: “All the Praises are for Allah Who has made us alive after He made us die (sleep) and unto Him is the Resurrection.” (Al-Bukhari)

Remove all worldly worries from your heart

At the time for prayer, calmly focus and reflect on the glory of your Lord. Do not worry about fleeting worldly problems that are ultimately meaningless in comparison to His infinite wisdom and mercy. Calm yourself and forget your worldly problems, hopes, and fears. Ignore any negative, distracting thoughts or feelings. Close your eyes and focus your attention on your heart as you begin to achieve a heightened state of spiritual awareness.

Number of Rak`ahs in Tahajjud

The Tahajjud is typically performed by repeating multiple rakats (cycles) of Salah, the ritual that Muslims use for their required daily prayer. For the Tahajjud, the rakats are usually performed in pairs, so you’ll also want to decide exactly how many rakats you intend to perform at this time. Generally, two rakats is seen as the minimum necessary for a proper Tahajjud. However, it’s possible to repeat as many more as you wish.

“Establish the prayer, at the decline (of) the sun till (the) darkness (of) the night and Quran at dawn, indeed, the Quran (at) the dawn is ever witnessed.” (Surah Al-Isra 17:78)

Tahajjud Prayer does not entail a specific number of rak`ahs that must be performed, nor is there any maximum limit that may be performed. It would be fulfilled even if one prayed just one rak`ah of Witr after `Isha’.

Samurah ibn Jundub (may Allah be pleased with him) said: The Messenger of Allah ordered us to pray during the night, a little or a lot, and to make the last of the Prayer the Witr Prayer. (At-Tabarani and Al-Bazar).

This is an ideal time to ask for forgiveness for your mistakes and sins as Allah is especially open to our repentance at night according to many ahadith.