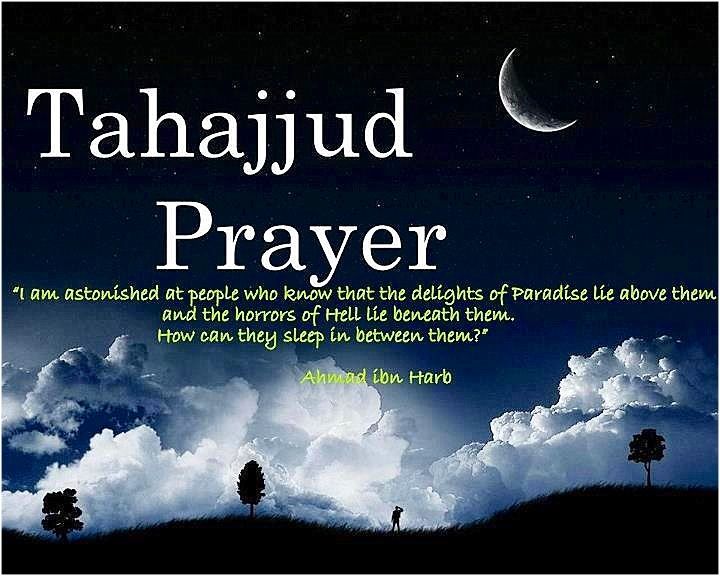 The midnight prayer means the Tahajjud prayer. “Tahajjud” is derived from “Hujud”, meaning sleep. Tahajjud signifies giving up sleep. The prayer was observed by the Holy Prophet (p.b.o.h.) from midnight up to the appearance of the early dawn. Tahajjud namaz is one of the non-obligatory prayers that one should pray in the latter part of the night after getting some sleep. Allah says:

“And from [part of] the night, pray with it as additional [worship] for you; it is expected that your Lord will resurrect you to a praised station.” (Surah Al-Isra` 17:79)

Tahajjud means to abandon sleep so that you can pray Salah. There are Numbers of Hadith and verses that emphasize the significance of invoking Allah Almighty by solicitation and prayers in the darkest nights.

Tahajjud prayer usually is done alone without together. Tahajjud prayer is not limited in number, but at least two Rakah. As Prophet Muhammad (SAW) explained:

Abu Muslim asked Abu Zhar: “Which late-night prayer is the best?” He said: “I asked the Messenger of Allah the same that you asked me and he said, ‘The (one done during) middle of the latter half of the night, and very few do it.’” (Ahmad)

It can’t be offered straight away after Isha, yet just after one`s rest, neither when the time is close to Fajr.

Following benefits one could get by offering Tahajjud prayer:

The excellence of night prayer

“And those who spend (the) night before their Lord, prostrating and standing.” (Surah Al-Furqan 25:64)

There is a moment in the night in which the prayer of a devotee is accepted. Night prayer expiates and prevents sins. The honourable among the Muslims are those learned in the Quran and those who pray at night.

Tahajud prayers can be offered from Isha prayers until Subah Sadiq (the true dawn) as no specific or exact time has been marked in the sacred scriptures but has deemed necessary upon one’s ease. Despite the convenient time, the Wistar prayers can be performed in the early night, middle night and later night but among three the best one that Prophet Muhammad (PBUH) has told to his followers is the middle night as quoted:

“Which late-night prayer is the best?” He said: “I asked the Messenger of Allah the same that you asked me and he said, ‘The (one done during) middle of the latter half of the night, and very few do it.’” [Ahmad]

Tahajjud prayer is one of the best among non-obligatory prayers, it is the cause of getting Allah`s great Blessings and Mercy. Allah the Merciful judges every act on the intention that has been made before the obligatory or voluntary prayers. Make Niyyah for Tahajud prayers when intend to sleep, the vitality of Niyyah lies in the virtues that it will impact on the Muslim who will miss it due to any reason.