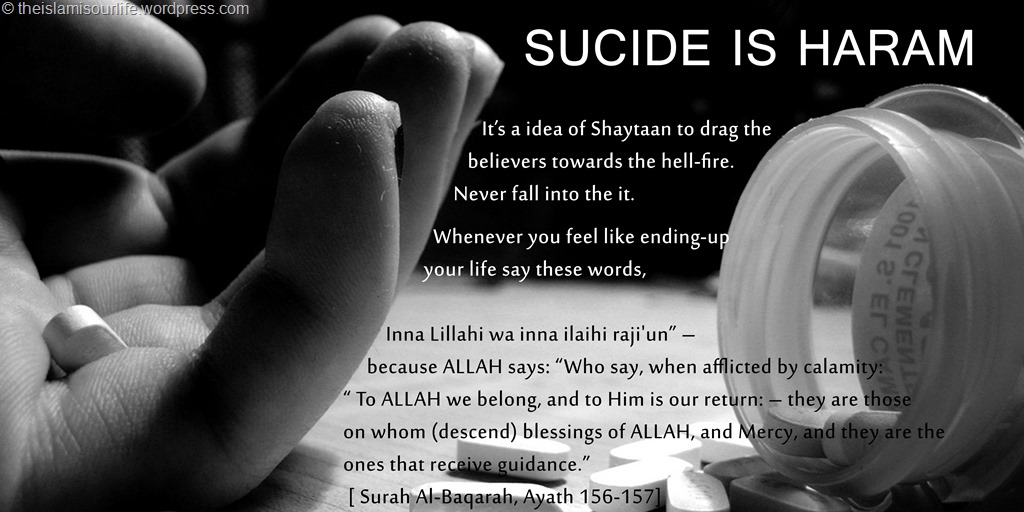 Committing suicide is one of the greatest sins that Islam banned. Committing suicide is a greater murder and sin than killing another person. One who does that is faced with a warning of eternity in the Fire of Hell, where Allah will punish him with the means that he used to commit suicide. The believer has to be patient and to seek the help of Allah, may He be exalted, and understand that no matter what hardship befalls him in this world — no matter how severe it is — the punishment of the Hereafter is worse than it. It is not acceptable according to anyone who is of the right mind to run away from the heat of the desert and throw himself into the fire. Allah says:

“O you who believe[d]! (Do) not eat your wealth between yourselves unjustly. But that (there) be business on mutual consent among you. And (do) not kill yourselves. Indeed, Allah is to you Most Merciful.” (Surah an-Nisa 4:29)

To all those suffering from sadness or depression, know that it isn’t your fault. It isn’t because you don’t have enough faith. It isn’t because God is angry with you. To all the well-meaning people who tell you this, just smile. And know deep in your heart that the tests of God come in different forms to different people. Allah says:

“And whoever does that (in) aggression and injustice, then soon We (into) a Fire. And that is for Allah easy.” (Surah An Nisa-4:30)

And know that, with the help of God, every test can become a tool to get closer to Him. And that, verily, with hardship comes ease–and like all things of this world–this too shall pass. We’d also like to inform you that Allah Almighty forgives all sins except for the great sin of unbelief. Allah says:

“Indeed, Allah (does) not forgive that partners be associated with Him, but He forgives other than that for whom He wills. And whoever associates partners with Allah, then surely he has fabricated a sin – tremendous.” (An-Nisaa’: 4:48)

Originally, suicide is an act that is forbidden in Islam. Suicide is not an option for you. Islamic teachings tell us that in committing suicide, one will incur the wrath of Allah to the extent that after death, one will suffer eternal punishment, i.e. a person committing suicide will be made to kill himself over and over again by the same means with which he took his own life. Allah says:

“Allah wishes to lighten for you and was created the mankind weak.” (Surah An-Nisa` 4:28)

All of us, for sure, err, but Allah forgives our sins and wipes them out if we are sincere in our repentance, true to our causes and determined in our intention. We Muslims believe that all our suffering, failures and adversities are nothing but a test from Allah. Allah says:

“And surely We will test you with something of [the] fear and [the] hunger and loss of [the] wealth and [the] lives and [the] fruits, but give good news (to) the patient ones.” (Surah Al-Baqarah: 2:155)

Hope is the medicine that keeps one alive and going, which is when we say, hang on, we mean to hang onto the thread of hope. It is not unnatural to be sad over situations and events. Even Prophet Muhammad, peace and blessings are upon him, used to be sad, looking at the plight of Unbelievers and their rejection of his message for Oneness of Allah, and not becoming Muslims. Allah says:

The Quran makes it clear that human life is sacred.  Life cannot be taken without justification and the right to life is inherent in the tenants of Islam.  Life itself is a gift from the Creator that we are obliged to care for.    Suicide out of despair of God’s mercy or worldly problems is strictly forbidden. Allah says:

Life is an unending succession of moments.  At the two extremes, there are joyful moments that make our hearts soar and dark moments that plunge us into sadness and worry or even despair.  Gladness and its opposite sadness are part of the human condition, however, when we lose control over our emotions we can easily fall into despair.  Despair is the feeling that we get when all hope has disappeared and it is a very dangerous situation. Allah says:

God tells us not to despair and particularly not to despair of His mercy.  God has not abandoned us in the face of the temptations and trials we face in this world; He is ever merciful and has equipped us with potent weapons.  God, the Most Merciful, gives us clear guidelines and promises two things if we worship Him and follow His guidance we will be rewarded with Paradise and that after hardship we will find ease. Allah says:

“Have you not seen those who claim themselves to be pure? Rather, Allah purifies whom He wills, and injustice is not done to them, [even] as much as a thread [inside a date seed].” (Surah An-Nisa 4:49)

If we face our fears and anxieties with complete trust in God and if we show patience and gratitude with all our circumstances, sadness and worry will disappear or at least feel lighter. Allah says:

“And those who believe[d] and do [the] righteous deeds We will admit them (in) Gardens flow from underneath it the rivers, will abide in it forever. A Promise (of) Allah (in) truth, and who (is) truer than Allah (in the) statement?” (Surah An-Nisa 4:122)

The religion of Islam is primarily concerned with making and keeping a connection with the One God.  One of the biggest mistakes that people can make is to separate their worldly life from their religious life.  The stressful situations that cause us to despair and feel unconnected to God always originate in the affairs of this world, such as emotional issues, financial stress, substance abuse or health issues.  Especially in this new century one of the most common reasons for despair is a sense of isolation or detachment from others. Allah says:

“And how many We have destroyed of a town which exulted, (in) its means of livelihood. And these (are) their dwellings not have been inhabited after them except a little. And indeed, [We] We (are) the inheritors.” (Surah Al-Qasas 28:58)

God has promised us that He is well aware of the situations that we face and He has given us weapons with which to face them.  In a series of articles on this site, we discuss the weapons of patience, gratitude, and trust. However, when it comes to despair, the condition that could in some situations lead a person to contemplate taking his or her own life, we need to dig a little deeper, we need to remind ourselves first and foremost that God is Merciful and that no matter what situation we find ourselves in He is ready to forgive and help. Allah says:

God the most merciful, compassionate, and beneficent has instructed us to inculcate these attributes and treat each other with respect and fairness. This includes not leaving anyone alone with their problems and worries. A little bit of support and care might help someone avoid the sin of ending their own life.  God also tells us not to mock, scorn, insult, abuse or put down one another. Both God and Prophet Muhammad remind us that He will punish those of us who commit injustices or oppress others. Allah says:

“So verily, they deny you in what you say, so not you are able (to) avert and not (to) help.” And whoever does wrong among you, We will make him a punishment great.” (Surah Al-Furqan 25:19)

Believers are not depressed by temporary things; they do not regard them as never-ending sorrow and grief. They show patience by saying this will also pass and try to get the reward of the patients. If we are mindful that God has control over all things and that He ultimately wants us to live forever in Paradise, we can begin to leave our sadness and worry behind. Allah says:

Thus, they transform misfortune into compassion. A human body is a construction made by Allah. He who has built that structure will pull it down. Man cannot own his body and his soul. It is a major sin and its punishment is subject to the will of God.  If He wills, He will forgive it, and if He wills He will punish for it.