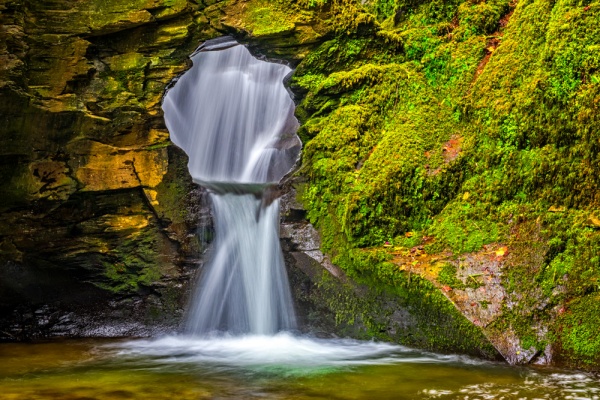 Saint Nectan’s Glen is an area of woodland in Trethevy near Tintagel, north Cornwall stretching for around one mile along both banks of the Trevillet River. The glen’s most prominent feature is St Nectan’s Kieve, a spectacular sixty foot waterfall through a hole in the rocks.

St Nectan’s Glen has been called one of the most sacred sites in Britain; it is certainly one of the most beautiful and fascinating historic sites in Cornwall. At the top of the glen are a series of three waterfalls below the site of a hermitage established by the 6th century Celtic saint Nectan. The hermitage and waterfalls can only be reached on foot after a mile long walk beside the River Trevillet.

St Nectan’s Glen has been named a Site of Special Scientific Interest (SSSI) in recognition of the wonderful array of rare plants growing along the wooded sides of the glen. The damp environment helps unusual species of liverwort and moss to flourish.

There are three waterfalls at the head of the Glen. The main falls is known as the Kieve, and drops some 60 feet before bursting through a circular hole in a rock and splashing into a shallow pool. The name ‘Kieve’ comes from the mining term for a wooden tub, or basin, used for extracting tin ore.

The force of the water has bored a hole through solid Devonian slate, creating an unforgettable natural phenomenon. The waters of the Kieve are said to have healing qualities. Visitors have been coming here for centuries, leaving small personal objects, crystals, inscriptions, and more recently, photographs, and ribbons.