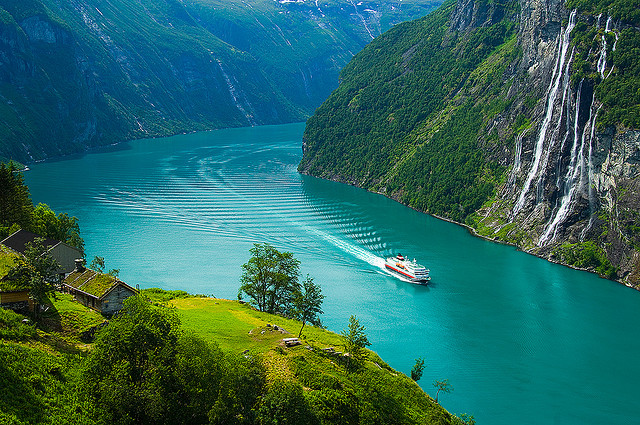 The Seven Sisters is the 39th tallest waterfall in Norway and it is the source of some of the most amazing photos. The legend has it that the “Seven Sisters” were all unmarried, and the waterfall on the other side of the fjord has been called “The Suitor” after several unsuccessful attempts to court the sisters.The waterfall consists of seven separate streams, and the tallest of the seven has a free fall that measures 250 meters (820 ft).They are close to Knivsflå, the abandoned farm. No less than seven waterfalls descend into the fjord. They have an average fall of around 250 meters and are an impressive sight when the water levels are high.

The falls are about 6.5 kilometers (4.0 mi) west of the village of Geiranger. It is part of the Geiranger World Heritage Site.The water level is dependent on the snow thaw and precipitation and may affect whether it is possible to see all seven falls equally clearly. The falls are naturally more visible during the major snow melting period in May-July and can be best observed by taking a boat trip on Geirangerfjord.