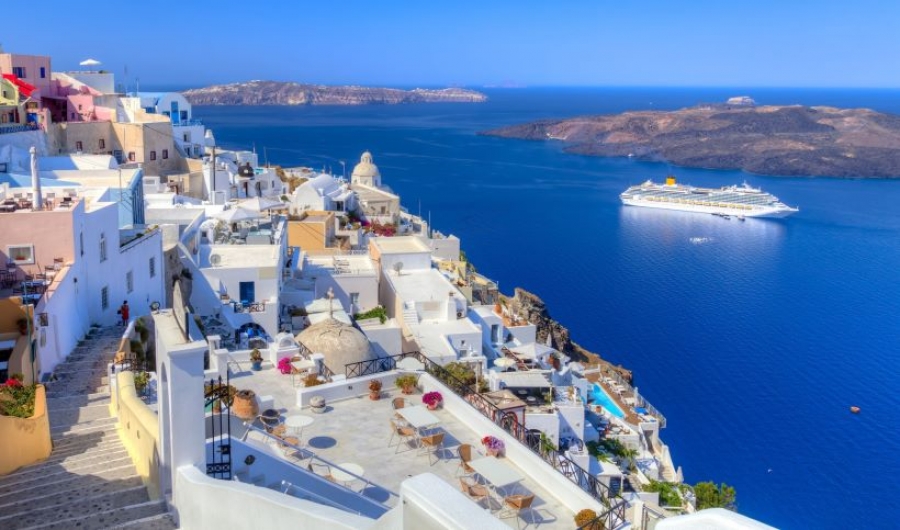 Santorini erupts with charm. A volcano embraced by the Aegean, this island-phenomenon in the Cyclades gives its visitors a mythical experience.Santorini is one of the Cyclades islands in the Aegean Sea. It was devastated by a volcanic eruption in the 16th century BC, forever shaping its rugged landscape. The whitewashed, cubiform houses of its 2 principal towns, Fira and Oia, cling to cliffs above an underwater caldera (crater). They overlook the sea, small islands to the west and beaches made up of black, red and white lava pebbles.

Encircling a sea-filled caldera, spectacular Santorini scores top points for dramatic beauty. Bleached white villas tumble down volcanic cliffs. Blue-domed churches rise against the sparkling sea, and bright sprays of bougainvillea add to the eye-popping canvas of color. Perched atop the black lava cliffs, the settlements of Firá and Oia are the island’s most picturesque, and pricey, destinations, and Oia ranks among the most photographed locations in the world.

Other highlights of the island include Akrotíri Archaeological Site, Ancient Thira, the black sand beach of Perissa, and of course, the sublime sunsets. Sailing into this stunning caldera surrounded by soaring sea cliffs makes an unforgettable first impression.Santorini – also known as Thera in Greek – is the island immortalized by poets and painters, thanks to its celebrated light, multi-coloured cliffs and picture-perfect sunsets. On this island all senses are magnified, a product of its many contrasts: black earth against whitewashed homes clinging to the cliffside, or wild volcanic sculptures against sleek Cycladic lines.