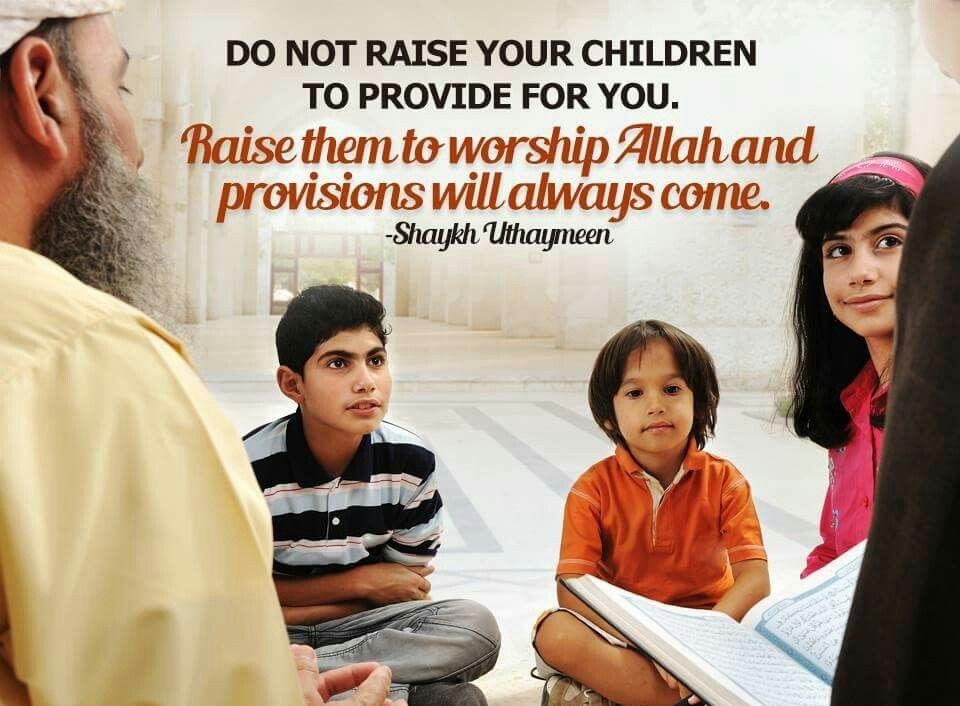 Islam cares about childhood and Muslims regard children as gifts/trust from Allah. Parents will be held responsible for this trust on the Day of Judgement. Hence Islam pays particular attention to the rights of children and to the proper manner to raise them so that they will be equipped to face the difficulties of life. We must pay more attention to the best interests of the children. Allah says:

“Does any of you wish that he should have a garden with date-palms and vines and streams flowing underneath, and all kinds of fruit, while he is stricken with old age, and his Children are not strong (enough to look after themselves)- that it should be caught in a whirlwind, with fire therein, and be burnt up? Thus doth Allah make clear to you (His) Signs; that ye may consider.” (Surah Al-Baqarah, 2:266)

All these principles were mentioned in the Noble Qur’an and Ahadith, which cares about the rights of the child even before he or she is born. Before getting married, a man should choose the best possible woman to be his children’s mother. In religion, Islam Allah Almighty commanded us (Muslims) to give honour, respect and obey our parents in our entire life except when it comes to the disobedience of Allah. Allah says:

“O you who believe! Protect yourselves and your families (from) a Fire whose fuel (is) people and stones, over it (are) Angels stern, severe; not they disobey Allah (in) what He Commands them but they do what they are commanded.” (Surah At-Tahrim, 66:6)

Children have the right to be fed, clothed and protected until they reach adulthood. The child has the right to a good education and a stable environment in which to grow up. Boys and girls, as well as orphans, possess these rights in full. Nevertheless, Allah and Holy Prophet Muhammad (PBUH) gave parents certain obligations to assure children’s rights. Allah says:

“And (he) whom We grant him long life, We reverse him in the creation. Then will not use intellect?” (Surah Ya-Sin 36:68)

Islam raised the status of parents and made it obligatory for Muslims to obey their parents with love and respect. It is the right of parents to be loved and respected but as we all know rights also come with responsibilities and duties. Allah says:

“These (are the) limits (of) Allah, and whoever obeys Allah and His Messenger, He will admit him (to) Gardens flows from underneath them the rivers – (will) abide forever in it. And that (is) the success [the] great.” (Surah An-Nisa 4:13)

Respect for human rights begins with the way that a community treats its children. Children’s rights cannot be separated from human rights because children are the future generation. Taking care of the coming generation by protecting their dignity and providing them with their needs is the most important thing for bringing up citizens best equipped to serve the community. Allah says:

“And likewise made pleasing to many of the polytheists – (the) killing (of) their children – their partners – so that they may ruin them and that they make confusing to them their religion. And if Allah had willed they (would) not have done so. So leave them and what they invent.” (Surah Al-Anam, 6:137)

Children are joys of life as well as sources of pride, seeds of arrogance, the cause of distress and allurement. Therefore, we need to be very focused and careful about their upbringing. Children are dependent on their parents and Islam clearly emphasized their responsibility on forming the child’s personality. Islam pays particular attention to upbringing children in a proper manner. Allah says:

Children have the rights to be fed, clothed, educated and protected until they reached adulthood. These rights are for both girls and boys there is no difference between their rights. We can say that children are a trust given to the parents. Parents will be held accountable for this trust on the Day of Judgment. Parents are responsible for the moral, ethical basic and essential religious teachings of their children which is their responsibility.

Some basic rights of children are mentioned below:

“Certainly, (are) lost those who killed their children (in) foolishness without the knowledge and forbid what Allah has provided them – inventing (lies) against Allah. Certainly, they have gone astray and not they are guided-ones…” (Surah Al-Anam, 6:140)

Islam sees that if parents fulfil their duties towards all their children in terms of providing them with the necessary training, educational backing, moral, ethical and religious education, this will lead to a more caring child, a better family atmosphere and a better social environment and awareness. On the other hand, any negligence in those parental duties can lead to the loss of a child or ill-treatment of the parents at a later age. Allah says:

“And if We willed surely, We (would have) transf in their places then not they would have been able to proceed and not return.” (Surah Ya-Sin 36:67)

The parents must keep in mind the following things mentioned above concerning their children so that they may not be corrupted under the influence of undesirable suggestions. Parents should teach their children Islamic teachings as well as worldly so that they get success in this life and hereafter too.