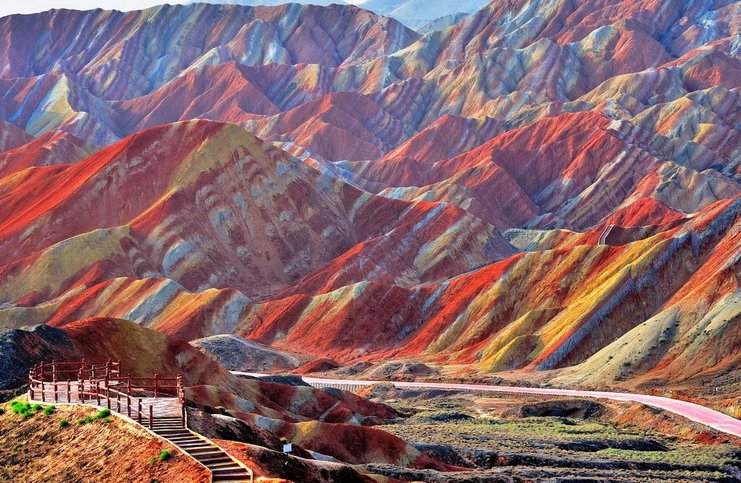 Rainbow Mountains of China are a landform of reddish sandstone that has been eroded to create magnificent rock formations with gorgeous colors. Zhangye Danxia, which means ‘rosy cloud’, is located around 600 miles west of Shanghai in the Gansu province, north-west China.The mountains are part of the Zhangye Danxia Landform Geological Park in China. Layers of different colored sandstone and minerals were pressed together over 24 million years and then buckled up by tectonic plates, according to the Telegraph.The core area of the park, Linze Danxia Scenic Area, is located 30 kilometers west of downtown Zhangye and 20 kilometers south of the seat of Linze County. It is the most developed and most visited part of the park.

Binggou is a second senic area and is located on the north bank of Liyuan River. This area was officially inaugurated on August 3rd, 2014. Binggou covers an area of 300 square kilometers and its elevation ranges from 1,500 to 2,500 meters above sea level. A third scenic area, Sunan Danxia Scenic Area, is located in Ganjun, south of Linze.These beautiful pics show the Danxia landform, one of the landscapes found in southeast and southwest China that “consist of a red bed characterized by steep cliffs”.It is a unique type of petrographic geomorphology found in China. Danxia landform is formed from red-colored sandstones and conglomerates of largely Cretaceous age.

The landforms look very much like karst topography that forms in areas underlain by limestones, but since the rocks that form Danxia are sandstones and conglomerates, they have been called “pseudo-karst” landforms. Danxia landforms cover several provinces in southeast China.

The Rainbow Mountains are Cretaceous sandstones and siltstones that were accumulated in China before the Himalayan Mountains were formed. The silt and sand were deposited with trace minerals and iron that provided it with the essential ingredient to form the colors we see today.

The colorful mountains were created over the course of 24 million years. Brightly colored layers of sandstone and minerals formed were crushed together under the earth and pushed to the surface as the tectonic plates shifted, creating the colorful patterns of rock strata.