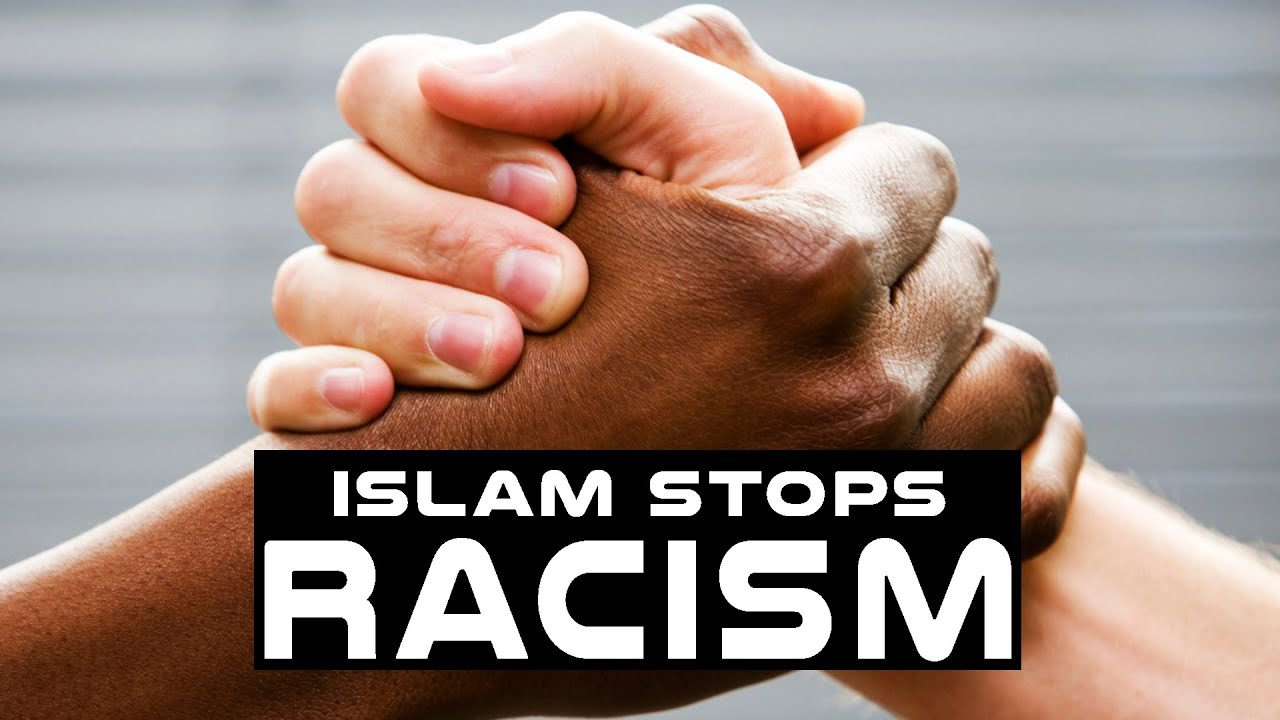 Islam is known as a faith for all people and for all times. Muslims come from all continents and backgrounds, encompassing 1/5 of humanity. In the heart of a Muslim, there is no room for arrogance and racism. Allah tells us that the diversity of life, and the various languages and colours of human beings, is a sign of Allah’s majesty, and a lesson for us to learn about humility, equality, and the appreciation of differences. Allah says:

“And among His Signs (is the) creation (of) the heavens and the earth, and the diversity (of) your languages and your colours. Indeed, in that surely (are) Signs for those of knowledge.” (Surah Ar-Rum 30:22)

Racism is discrimination and prejudice towards the person because of their race and sometimes ethnicity. Racial describe discrimination on an ethnic or cultural basis, outside of either these differences are defined racially. Muslim is not a race but a form of bullying to Islam is equated with racism. Racism is not only outside Islam (Islamophobia) but also inside Islam. Allah says:

Racism in Islam happened at the beginning of human life when Satan thought himself superior to Adam on account of his origins. As Muslims, it is fundamental we believe that discriminatory exclusion based on race is alien to the spirit of our faith and in turn, we should raise our children with this belief. We should instil in them that there are no excuses or reasons for racism. It’s just wrong.

Islam is indeed a religion and Muslims are not a race. Nonetheless, that should not claim that Islamophobia is a form of racism. It is the same way when we say that black people are not a race so anti-blackness is not the form of racism. We understand that it is not that true because black people come from many ethnic and many nations all over the world, which suffered from anti-black discrimination. That is why it is practically the definition of racism. Allah says:

The form of Islamophobia as well happened in Sikhism. It is such a case of violence against Sikhs are considered. Sikhs are not Moslem, and they are much odd with Moslems. However, they had been shot and killed, got harassed at the airport. They are suffered from the other forms of Islamophobia because of their brown-skinned with their beard and turban outfits. Allah says:

“And among His Signs is the creation of the heavens and the earth, and the difference of your languages and colours. Verily, in that are indeed signs for those who know.” (Surah Ar-Rum 30:22)

Islamophobia is racism hidden under appearance claiming of being opposed to barbarism. If it is not a form of racism, then the Sikh men in turbans, who do not part of Islam and are apart spiritually from Muslims than Christians are, would not be getting harassed. Allah says:

Islamophobia is displayed through the surface characteristics of the race. Sometimes people are discriminated against because of the colour of their skin, their outfit, their long beard, the Middle Eastern of their name. Thus, this is the form of racism and discrimination that should not happen to our Moslem people all over the world.

The Moslem community is a global community of diversity, variety, and colour. We have learned to accept some Moslems (and non-Moslem) without seeing to their colour, nationality or ethnicity. Nevertheless, black Moslems (and another coloured skin Moslem) experience racism from our brothers and sisters in Islam. Every effort to tackle these problems has been swept under the rug with the phrase “One Ummah brother, we admit no racism in Islam”. Allah says:

“O you who believe! Consciously revere Allah and be with those who are truthful.” (Surah At-Taubah 9:119)

When non-Moslems are racist to black Muslims, it’s quite easy to deal with the issue. We anticipate ignoring these racists and forgiving them for their mental object. However once your own “brothers and sisters” reject you because of your skin colour, it’s quite unhappy and problematic. It seems like there is no shelter for those who need protection. Arab domination towards black folks is still not passed. It might be there has not ever been a unified Moslem community. Allah says:

“And He (is) the One Who (has) produced you from a single soul, so (there is) a place of dwell and a resting place. Certainly, We have made clear the Signs for a people (who) understand.” (Surah Al-An`am 6:98)

Racism is the belief that a particular race is superior or inferior to another, that a person’s social and moral traits are predetermined by his or her inborn biological characteristics. It is the belief that different races should remain segregated and apart from one another. Such racist attitudes are abhorred and condemned in Islam. Allah says:

“And among His wonders is this: He creates you out of the dust, and then, behold! You become human beings ranging far and wide!” (Surah Ar-Rum 30:20)

Islam with its universal concept of this brotherhood rejects all artificial and man-made marks of distinction.No one can claim any superiority over the other based on race, colour, language or wealth and this is emphasized in the last sermon of Prophet Muhammad (PBUH) showing high regard of humanity irrespective of colour or race

How to Solve Racism

Racism can be combated if we are as Muslims respect first to others so that they would give a positive way to us as well our religion. At least we have to try on how to minimize racism which is the problem nowadays.

1. Be Confident in Who You Are: If you are the subject of racism just be confident of who you are. Racism happened because the victims feel insecure with whom they are from. You should be proud of where you are, your race, ethnicity, nation. Just believe that Allah considers people with the same equality and be grateful that Allah created you just the way you are.

2. Saying Salaam: Islam teaches Moslem all over the world saying salaam when we meet our brotherhood/sisterhood wherever you are. The salaam like “As Salaamu Alaykum” has a meaning of  “peace be upon you”

3. Do Not Generalized: If you being experienced racism or harassment by the people in a certain country, then don’t judge other people in the same country who has the same attitude.

4. Say No to Racial Joke: Train yourself not to talk about the racial joke or just joke toward some race which could be hurt of the one’s feeling.

5. Step out of Your Comfort Zone: According to Quran 49:13 (Al Hujurat), Allah has created a human from males to females, with various tribes, and should know each other. So, if you go to a new place, be kind to the native country wherever you go. You should introduce yourself and make a kind gesture so that the foreign people will respect you.

6. Arrange Multi-Cultural Event: It is better if you have an Islamic community or local masjid ask to arrange the cultural event and we will see many various people from different cultures and countries join in the same event.

7. Stand with Each Other: Allah asks us to help each other and we must find another if they need our help. Whether when one in condolence on their dying family member or other things they need support from you. The way you treat them when they are in their darkest time show them that you can rely on them.

8. Humble Yourself: Most Muslims understand that they are nothing more than a slave of Allah. We should feel small in front of Allah and there is no one superior, wealthiest, richest. An arrogant person will not be allowed to enter Jannah.

We must realize that to be born a human being is a rare event in itself, and it is wise to use this opportunity as effectively and skillfully as possible. We must have the proper perspective that the happiness or glory of one person or group is not sought at the expense of others. Allah says:

Thus, racism and Islam would be related as long as depends on how people consider others. Just remember of Allah and you may live peacefully together. Hopefully, this article will a little bit solving problems of human race issue nowadays.