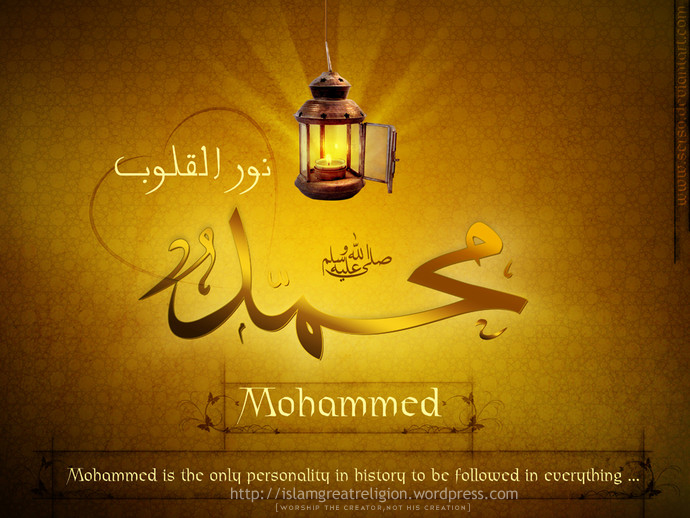 The Holy Prophet himself was the best example of the good moral character to emulate when he was giving a call to his followers. Before advising them to adopt a moral life by giving sermons and counsels, he was sowing the seeds of morality among his followers by actually living that kind of life. The Holy Prophet (PBUH) is the centre of the characteristics of all Messengers of Almighty Allah. Allah says:

Even today, Prophet Muhammad (P.B.U.H) is considered to be the finest leader with the highest moral values. He was sent to the world with the huge responsibility of spreading Allah’s word and guiding the entire humanity to the right path. It was his upright character and integrated personality which impressed people and helped them see the truth in an era when the world was immersed in the gloom of kufr. Allah says:

The Holy Prophet spent a very simple life. He used to have a single dress to wear, cleaned His clothes and mended His shoes Himself. He always preached to others to avoid going towards materialism by not accumulating any kind of wealth in His entire life. He never ate to fill his stomach, rather he used to fast, and many times He would wrap stones around His belly to avoid having a feeling of hunger. Allah says:

Listed below are a few of his personality traits that all Muslims must know and try to adopt:

It is not possible to describe the greatness of the Holy Prophet (PBUH) in one attempt, because there is a multitude of characteristics of His personality which make Him a great person. He changed the lives of the illiterate Arabs who were enemies of one another and could not live a day in peace. Allah says:

The character of Muhammad (PBUH) is not only a huge source of inspiration for Muslims but all human beings. All the societal issues and evils could be eradicated if we all follow His teachings and act like him. Allah says:

“Indeed, We know that it grieves you what they say. And indeed, they (do) not deny you but the wrongdoers – the Verses of Allah they reject.” (Surah Al-An`am 6:33)

Allah’s last Messenger, Muhammad (P.B.U.H), had the most upright character and a personality like none other. We can never be as perfect as him but we must strive to follow in his footsteps to achieve greater rewards in the hereafter.