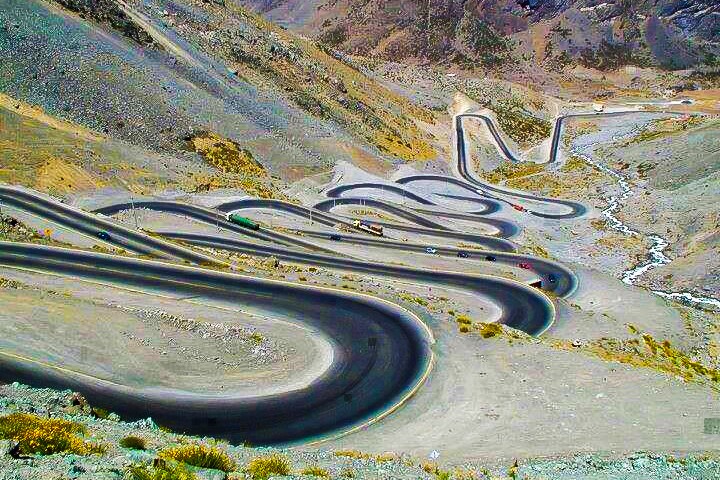 Lowari Pass is a high mountain pass at an elevation of 3.118 m (10,230 ft) above the sea level, located in Khyber-Pakhtunkhwa, Pakistan. The road over the pass, called N45, is one of the famous hairpinned roads in the world.It’s said to be the grand daddy of the passes.

The road over the pass links Dir and Chitral, and winds its way through the tribal regions bordering Afghanistan. The road is known among locals as Hell’s Road. It was built by the British and is a road where even the slightest error can be fatal. The pass is closed by snow from late November to late May every year. The pass, also known as Lawari, Lawarai or Lowari Top is a relatively low pass, by far the lowest pass to enter Chitral, the rest all being 12,000 to 15,000 feet.

The road is winding, in some places only wide enough for one vehicle, and in many places bordered by a drop of hundreds of meters (many hundreds of feet) unprotected by guardrails. Despite being shown as being paved according to some maps, it turns to very rough dirt as soon as the steep incline begins, and stays that way until Dir (pronounced deer) around 40km later.

Words can’t describe the road and pictures don’t do it justice. It’s a narrow road with plenty of hairpin bends all through the way. It’s an extreme road with many close turns on the road. The road wins up the cliffs of over 10,000 feet. There are plenty of dirt switchbacks. This is dangerous, as there are high mountains on each side of Lowari Top, and a deadly avalanche can come at any moment without warning. Every winter a few persons are killed by avalanches while crossing Lowari Top. Their bodies are buried under the snow and it is only when the summer comes and the snow melts that their bodies are found and their fate learned.