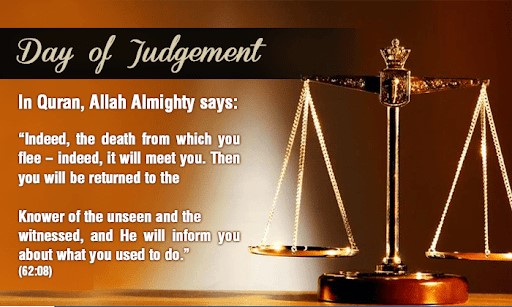 Death is one of the few indisputable facts of life. Quran holds all the teachings regarding the Day of resurrection, occurrence, and life after death. Regardless of faith, race, status or age, we will all die. Islam teaches that one’s life doesn’t end on earth; rather, it is followed by the eternal life of the hereafter. Muslims believe they will return to God (Allah in Arabic) when they die. Therefore, instead of the end, death becomes part of a continuum that stretches into eternity. Allah says:

Resurrection and life after death are deep-rooted beliefs as all divine prophets have informed about them. Due to their faith in the One God who created this universe and sustains it, Muslims rely on divine guidance for glimpses of a reality invisible to human eyes. Divine guidance comprises prophetic examples and scriptural revelations. God sent prophets to guide humanity, such as Adam, Noah, Abraham, Moses, Jesus and Muhammad, the final prophet of God, peace be upon all of them. Allah says:

Those who fulfilled their purpose in life and lived righteously will enter an eternal paradise of pure bliss. The people of heaven will reside in beautiful mansions, no longer suffering from fatigue, disease and old age. God will remove animosity and pain from people’s hearts, providing supreme healing in a world of abundance and luxury, of lush gardens and flowing rivers.

Major Signs of the Day of Judgment:

In contrast, those who die in a state of transgression against God or oppress others will be led to Hellfire. Despite all of God’s blessings, they neglected their ultimate purpose of leading their lives in accordance with His Will and Guidance. The Quran describes Hell as a place filled with immense suffering, with extreme temperatures, unquenchable thirst and blazing flames. Allah says:

Truly, God wants each one of us to be salvaged in the afterlife. He has sent guidance and left signs for those who seek Him and reflect. At the same time, He has given us the choice to freely indulge in the world around us or to abide by His laws. Allah says:

“Of the day when they shall come forth, nothing concerning them remains hidden to Allah. To whom belongs the kingdom this day? To Allah, the One, the Subduer of all.” (Quran 40:16)

The purpose of these signs and indications is to warn mankind about the impending doom and serve as a reminder of the transitory nature of this world that we have attached ourselves to. We are also reminded of our purpose in this world and the small part that we play in the grander scheme of things. Allah says:

“On the day when the earth shall be changed into a different earth, and the heavens (as well), and they shall come forth before Allah, the One, the Supreme.” (Quran 14:48)

Belief in the soul and the afterlife gives a context to our current existence. Those who focus only on this immediate life miss out on the bigger picture. Indeed, they become heedless of their purpose in life. God reminds humanity, Allah says:

Their life is one of submission to God and they seek to positively contribute to the world around them. All of their transactions with people, even animals and the environment, are rooted in this motivation. They are guided by the certainty that they will one day return to their Creator and be held accountable for their deeds. Allah says:

“That Day will proceed the mankind (in) scattered groups to be shown their deeds.” (Surat Az-Zalzalah, 99:6)

our souls are intangible beings giving life to our physical bodies, the world we see around us is functioning based on an invisible system created by God who is Ever-Watchful and All-Aware. Muslims believe that God is also Just and He maintains a meticulous record of our deeds. We will be recompensed for our earthly lives in the hereafter where ultimate justice prevails.

Below here are the other signs of Qiyamat based on the Quran. These are signs of Qayamat are happen in the future.

Allah has a clear narrative regarding the day after death when the judgment will take place and everyone will face accountability as per committed deeds. Humans naturally seek justice in all aspects of their lives. When a person works, they expect to receive an appropriate salary. When an individual is harmed, they seek compensation. Allah says:

“And on the day when He will gather them as though they had not stayed but an hour of the day…” (Quran10:45)

Muslims seek salvation in the hereafter by living a God-conscious and virtuous life in this world. The fear of accountability in the hereafter, along with hope in the promise of God’s ultimate justice, motivates them to orient their present lives around the comprehensive worship of God, the true purpose of human existence. In this way, they endeavour in this temporary life for eternal joy. Allah says:

Let’s open our eyes to the truth and see the direction of our lives and adjust our sails accordingly. May Allah enable us to recognize and heed the Signs, and strengthen us in the times of tribulation. Judgment Day will come when the whole universe will be destroyed and the dead will be resurrected for Judgment by Allah. Judgment Day will be the beginning of a life that will never end.