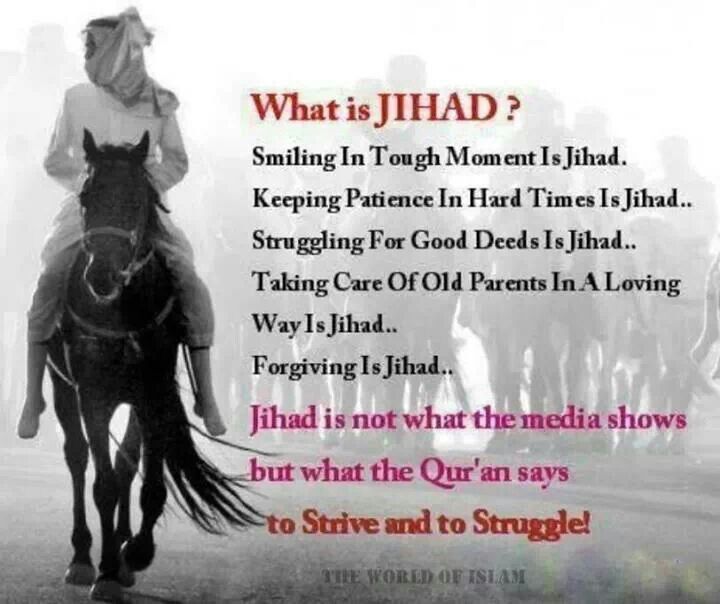 Islam comes from the root word Salaam, which means peace. It also means submitting one’s will to Allah. The word Salaam is also an attribute of God. Islam makes it obligatory upon Muslims to stand by the helpless regardless of their race, colour, religion or relationship and say no to the oppressor and ask him to respond to the voice of reason and justice. Allah says:

“Fight them – Allah will punish them by your hands and disgrace them and give you victory over them, and will heal (the) breasts (of) a people (who are) believers.” (Surah At-Tawbah, 9: 13)

Many people in western misunderstood the concept of being against the oppressor and responding to the voice of reason and justice so we are going to discuss in detail in this article about Jihad is basically “to work hard for something in the way of Allah.”In this context, it means ‘The Giver of Peace. Muslim to live in a safe and peaceful environment and to make efforts for the spread and continuity of peace. Islam is called “the Religion of Peace”. Allah says::

“And prepare for them whatever you able (to) of force and of cavalry (to) terrify therewith (the) enemy of Allah, and your enemy and others besides them, you (do) not know them (but) Allah knows them. And whatever you spend from (any) thing in (the) way (of) Allah it will be fully repaid to you, and you (will) not be wronged.” (Surah Al-Anfal, 8: 60)

Muslims to fight against the enemies of Allah, with all covertness they could gather in order to succeed, and also emphasize on spending their properties and money for this cause. That fulfils the basis of Islam which is putting forward one`s everything for the Almighty Lord. These lines tell them about making harmony with those who seek peace, which is the realization of the secondary significance of this belief, i.e. extending peace in the world. Allah says:

The Qur’an refers to Paradise as the “abode of peace”. Thus peace is a goal that Muslims are required to strive for, in their own selves, in their families and in their communities. It is ironic, therefore, that Islam is perceived by many as being the motivation behind the wanton killing of innocent people. Islam does not call for violence; relatively it disliked all forms of violence and terrorism. No matter against Muslims or Non-Muslims, Islam calls for peace, cooperation and maintaining justice for humanity as a whole. Allah says:

Jihad in the Quran

Like any other obligatory and supreme acts in the religion of Islam, Jihad is also a God-given responsibility to the Muslims, which should only be analyzed according to the Sacred Scripture i.e. The Holy Quran, and not what the uninformed people do by manipulating its actual denotation. Allah says:

“Those who believed and emigrated and strove in (the) way (of) Allah with their wealth and their lives (are) greater (in) rank near Allah. And those – they (are) the successful.” (Surah At-Tawbah, 9: 20)

So, Jihad is actually the name of doing one`s best in terms of both fighting and expanding everything one has. As property is among the most important things one has, it is imperative to spend as much as one can, besides going in to direct battle with the enemies of Islam. Now, the act of warfare needs to be elaborated, as it is greatly misjudged and linked with wrong motives. Allah says:

“And fight in (the) way (of) Allah those who fight you and (do) not transgress. Indeed, Allah (does) not like the transgressors.” (Surah Al-Baqarah, 2:190)

The phrase “Who Fight You” clearly indicates that the Almighty has ordered to clash with only those who brawl with Muslims and try to destroy them. So, there is no way one could say that Jihad is an alternate name for spreading aggression and slaughtering people. It also means that one cannot instigate a war against others, but only defend themselves. After it has become evident that Jihad is only meant for self-defence and not the other way around, it is necessary to have a look at the following verse. Allah says:

“And kill them wherever you find them, and drive them out from wherever they drove you out, and [the] oppression (is) worse than [the] killing. And (do) not fight them near Al-Masjid Al-Haraam until they fight you in it. Then if they fight you, then kill them. Such (is the) reward (of) the disbelievers.” (Surah Baqarah, 2: 191)

Haters of Islam only quote the very first line of the above verses and argue that Muslims are cruel and are meant to kill others wherever they find them, but that is not actually true. It has been added in the following verse by Allah SWT that if they ask for mercy, then there is no need to fight and kill them. This is the whole concept of Jihad from the above lines of the Quran and it should not be misquoted. Allah says:

“And We made from among them (Children of Israel), leaders, giving guidance under Our Command when they were patient and used to believe with certainty in Our Ayat (proofs, verses, signs, revelations, etc.)” (As-Sajdah: 24).

So, it’s crystal clear from the previous lines of the Quran that combating is only obligated once Muslims are under attack, and when they need to protect themselves. Jihad is said to be “fighting for the cause of Allah”, but there is increased requisite to comprehend what this phrase actually means, as the word fighting is being misused by extremist organizations operating in different regions of the world and portray it as the religious duty.

WHAT JIHAD IS NOT

The ruler, the Imām, is completely answerable to the people and their legal apparatus, the most important representatives of whom are the scholars. The position of the law is that only at such a time when it can be reasonably proven that;

At such a time the ruler can declare and execute the provisions of combative Jihād.

Naturally, every community has the right to self-defence and in the case of Islam, where religion is the primary dimension of human existence, the war in defence of the nation becomes a religious act. A lack of understanding of this quality of Islam, its non-secularism; has also contributed considerably to the fear that when Islam talks about war it means going to war to convert. This might be true in other cultures, but Islam must be allowed to speak for itself.

Jihad is of two kinds: major (struggling against inner self) and minor (combating enemies of Islam). It consists of all kinds of efforts which are for the sake of resoluteness to one`s religious convictions. It includes responding aggressively to enemies of Islam who try to wipe out Muslims by force, help the oppressed, but try to have harmony with them if they require it. If the enemy offers peace, it should be accepted even at the risk of possible deception. Allah says:

Regardless of how legitimate a cause may be, Islam does not condone the killing of innocent people. Terrorizing the civilian population, whether by individuals or states, can never be termed as jihad and can never be reconciled with the teachings of Islam. In short, Jihad is not just only fighting against enemies.