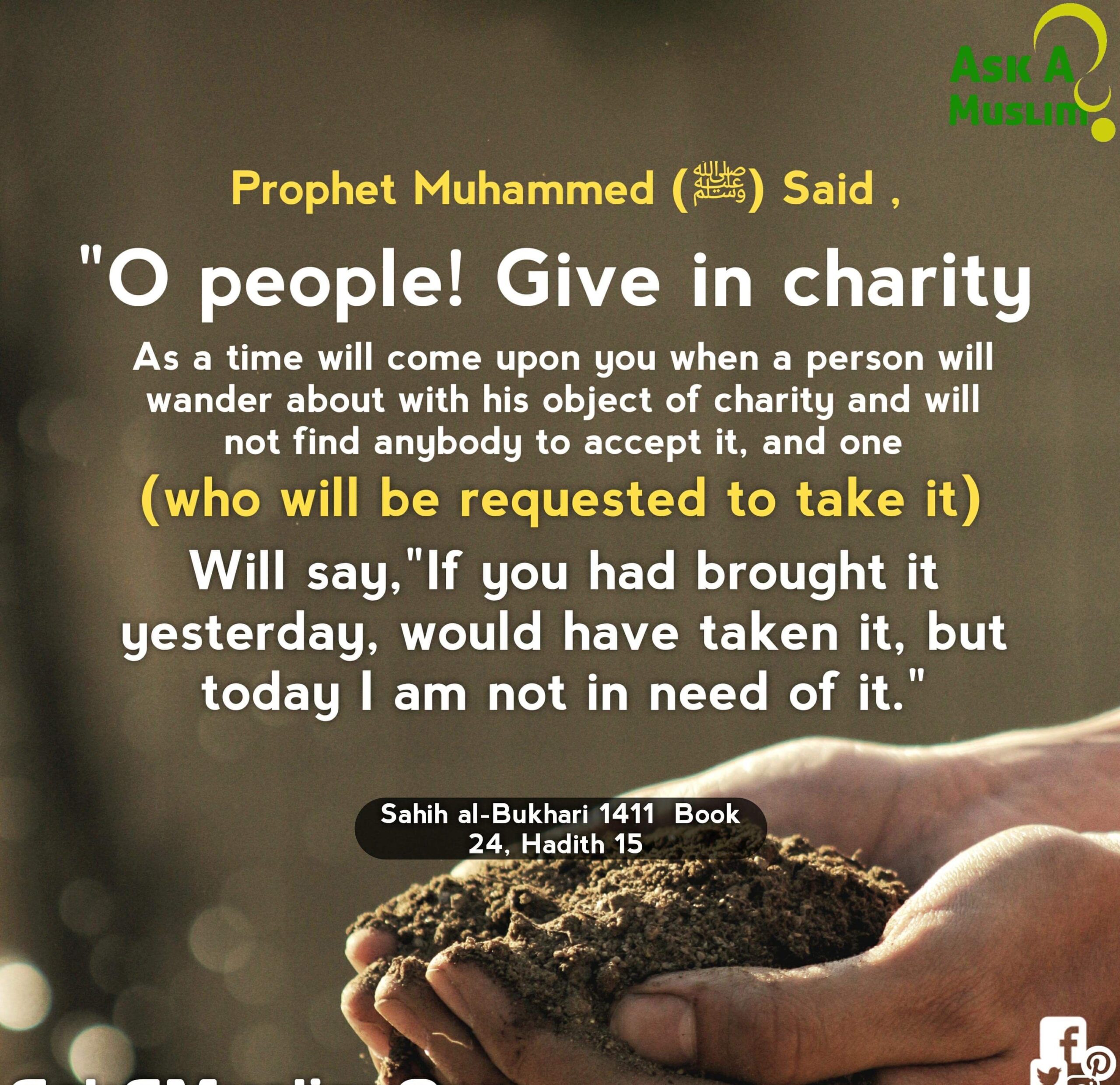 \Islam is the religion of peace that supports humanity and mankind in the best possible ways. Charity is an act of giving out to the people in need and society at large. The charity can be in the form of money, goods, food or even the simple act of spending time with those who need your assistance in any form. Allah says:

“They ask you, [O Muhammad], what they should spend. Say, “Whatever you spend of good is [to be] for parents and relatives and orphans and the needy and the traveller. And whatever you do of good – indeed, Allah is Knowing of it.” (Surah Al-Baqarah 2:215)

Life doesn’t offer equal opportunities for everyone; through charity, we can share our blessings with those less fortunate and thus try to bring balance into society. We all want to live happily in the world, try to do many charities so that grieving will be removed from us. Allah says:

“Those who spend their wealth in the Cause of Allaah, and do not follow up their gifts with reminders of their generosity or with injury, their reward is with their Lord. On them shall be no fear, nor shall they grieve.” (Surah Al Baqara 2:262)

Charity is the essence of Islam and it has great importance in the lives of Muslims. Muslim community thrives on charity. The effort Islam puts in financial checks and balances for every member of the Muslim society shows the deep values for human rights. It helps to build a strong society where the flow of wealth is even and basic human needs are met. Along with the help of those receiving charity. Allah says:

“Never will you attain the good [reward] until you spend [in the way of Allah] from that which you love. And whatever you spend – indeed, Allah is Knowing of it.” (Surah Al-Imran 3:92)

Charity is one of the things that hit two targets with one arrow. It not only helps the people in need but also benefits the giver by increasing the excellence and blessings either in this world or hereafter. This is why most Muslims try to donate to charity in every way possible to fulfil their responsibilities as religious people. Allah says:

“And establish the prayer and give zakah and bow down with those who bow down.” (Surah Al Baqara 2:43)

While we live, we are told to worship Allah SWT and be kind to another human. There is a way for us to do both at once, by doing charity. Charity placed third among five principles in Islam, which means that every Muslim should do charity at all costs. It has become our obligation to do good and seek Allah’s pleasure. Allah says:

“The aims are only for the poor and the needy, and those who collect them, and those whose hearts are to be reconciled, and to free the captives and the debtors, and for the cause of Allah, and (for) the wayfarer; a duty imposed by Allah. Allah is Knower, Wise.” (Surah At-Taubah 9:60)

Worshipping Allah is the purpose of humanity’s creation. While Salat and reciting Quran are the main kind of worship, giving charity is also one of them. Every Muslim has their faith in Allah SWT and His Messenger (peace be upon him). But faith should not only be spoken but proved as well.

What Does Allah Almighty say in the Holy Quran About Charity?

The Quran also reminds us that we should be humble about our offerings of charity, not embarrassing or injuring the recipients.

How to Give Charity in Islam

We can do charity by teaching our kids, relatives, and family how to read Quran. The reward will still be given to us even after our death. Every time the person we taught recite Quran, we will also be rewarded. So those are all the benefits of charity in Islam. We are taught to be kind to others by Islam, so let’s continue the legacy of Islam by performing many good deeds charities as long as we live. Allah says:

The concept of charity derives from the fact to acknowledge that we own nothing but whatever has been given to us is a blessing by Allah (SWT) and it’s His property. So when we give out something from our pocket, we are actually sharing Allah’s blessings with His mankind and since we don’t own anything, we don’t lose anything by giving out but only gain Allah’s rewards. Allah says:

“And establish prayer and give zakah, and whatever good you put forward for yourselves – you will find it with Allah. Indeed, Allah of what you do is Seeing.” (Surah Al-Baqarah 2:110)

The Muslim who is Giving charity also benefits from it in terms of an increase in faith. In Islam, charity is seen as the multiplication of wealth in contrast to giving out money which keeps reminding Muslims about Akhirah and their accountability before Allah. Thus Islam and Quran heavily promote charity and every Muslim is rewarded with something way better than what he gives up in way of Allah.