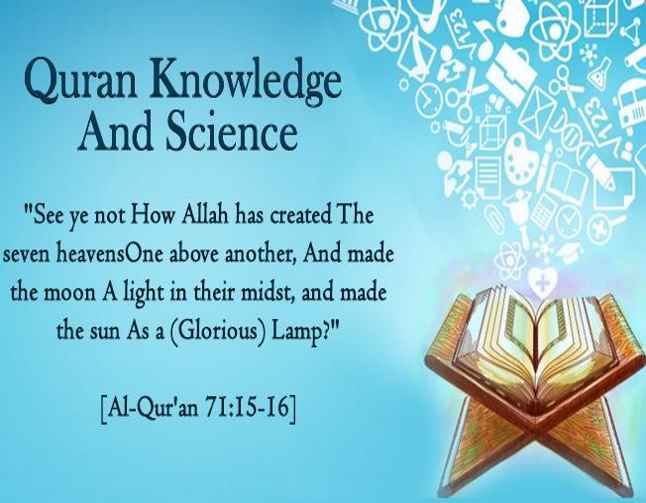 The Holy Quran is basically a book of guidance, revealed by the Creator to address areas that cannot be answered by the human intellect such as the essence of faith, the acts of worship, the moral code and the rules and regulations that govern the various transactions between human beings. These are just some of the many scientific facts found in the Quran. It is important to note that the Quran is not a book of science, but that it is consistent with science. Allah says:

“And among His Signs (is) that you see the earth barren, but when We send down upon it water it is stirred (to life) and grows. Indeed, the One Who gives it life, (is) surely the Giver of life (to) the dead. Indeed, He (is) on everything All-Powerful.” (Surah Fussilat 86:12)

Ever since the dawn of mankind, we have sought to understand nature and our place in it. In this quest for our purpose in life, many people have turned to religion. Most religions are based on books claimed by their followers to be divinely inspired, without any proof. Islam is different because it is based on reason and proof. There are scientific and historical facts found in the Quran which were unknown to the people at the time and have only been discovered in the race. Allah says:

“Soon We will show them Our Signs in the horizons and in themselves until becomes clear to them, that it (is) the truth. Is (it) not sufficient concerning your Lord, that He (is) over all things a Witness?” (Surah Fussilat 41:53)

The Quran, the book of Islam, is the final book of revelation from God to humanity and the last in the line of revelations given to the Prophets. In Islam, God is nothing like a human being or like anything that we can imagine. The concept of God is summarised in the Quran as:

“Indeed, in (the) creation (of) the heavens and the earth and (in the) alternation (of) the night and the day (are) surely Signs for men (of) understanding.” (Surah Al ‘Imran 3:190)

Although the Quran (revealed over 1400 years ago), is not primarily a book of science, it does contain scientific facts that have only been discovered recently through the advancement of technology and scientific knowledge. Islam encourages reflection and scientific research because understanding the nature of creation enables people to further appreciate their Creator and the extent of His power and wisdom. Allah says:

Say, “Travel in the earth and see how He originated the creation, Then Allah will produce the creation the last. Indeed, Allah on everything (is) All-Powerful.” (Surah Al-Ankabut 29:20)

The Quran was revealed at a time when Science was primitive; there were no telescopes, microscopes or anything close to today’s technology. People believed that the sun orbited the earth and the sky was held up by pillars at the corners of a flat earth. Against this backdrop the Quran was revealed, containing many scientific facts on topics ranging from astronomy to biology, geology to zoology. Allah says:

“Do not see those who disbelieved that the heavens and the earth were a joined entity, then We parted them and We made from [the] water every living thing? Then will not they believe?” (Surah Al-Anbiya 21:30)

The reflection of Islam can be found in every aspect of the life of a Muslim, whether it is the social, political, economic, anthropological or any other aspect of life. Among the various factors, the thing that makes Islam the best religion for the contemporary life of today’s world is the fact that it is an incomplete resonance with science which is a primitive tool for the people of today for judging something.

Some of the many scientific facts found in the Quran include:

Water is pointed out as the origin of all life. All living things are made of cells and we now know that cells are mostly made of water. This was discovered only after the invention of the microscope. In the deserts of Arabia, it would be inconceivable to think that someone would have guessed that all life came from water.

God speaks about the stages of man’s embryonic development:

“We (God) created man from an extract of clay. Then We made him as a drop in a place of settlement, firmly fixed. Then We made the drop into an alaqah [leech, suspended thing, and blood clot], then We made the alaqah into a mudghah [chewed substance]…” (Quran, 23:12-14)

Fact 3 – Expansion of the Universe

One of the intended meanings of the above verse is that God is expanding the universe (i.e. heavens). Other meanings are that God provides for, and has power over, the universe – which is also true. At a time when the science of Astronomy was still primitive, the following verse in the Quran was revealed:

“And the heaven We constructed it with strength, and indeed, We (are) surely (its) Expanders.” (Surah Adh-Dhariyat 51:47)

Iron is not natural to earth, as it came to this planet from outer space. Scientists have found that billions of years ago, the earth was struck by meteorites that were carrying Iron from distant stars which had exploded.

“We sent down iron with its great inherent strength and its many benefits for humankind.” (Quran 57:25)

God uses the words ‘sent down’. The fact that iron was sent down to earth from outer space is something that could not be known by the primitive science of the seventh century.

The sky plays a crucial role in protecting the earth and its inhabitants from the lethal rays of the sun, as well as the freezing cold of space. God asks us to consider the sky in the following verse:

“We (God) made the sky a protective ceiling. And yet they are turning away from Our signs!” (Quran 21:32)

The Quran points to the sky’s protection as a sign of God, protective properties which were discovered by scientific research conducted in the twentieth century.

God draws our attention to an important characteristic of mountains:

The Quran accurately describes the deep roots of mountains by using the word “stakes”. Mount Everest, for example, has an approximate height of 9km above ground, while its root is deeper than 125 km. The fact that mountains have deep ‘stake’-like roots were not known until after the development of the theory of plate tectonics at the beginning of the twentieth century. God also says in the Quran (16:15), that the mountains have a role in stabilizing the earth “…so that it would not shake,” which has just begun to be understood by scientists.

In 1512, astronomer Nicholas Copernicus put forward his theory that the Sun is motionless at the centre of the solar system and the planets revolve around it. This belief was widespread amongst astronomers until the twentieth century. It is now a well-established fact that the Sun is not stationary but is moving in an orbit around the centre of our Milky Way galaxy.

Fact 8 – Internal Waves in the Ocean

It was commonly thought that waves only occur on the surface of the ocean. However, oceanographers have discovered that there are internal waves that take place below the surface which are invisible to the human eye and can only be detected by specialized equipment. The Quran mentions:

This description is amazing because 1400 years ago there was no specialist equipment to discover the internal waves deep inside the oceans.

The Quran is a book of guidance that demonstrates that God did not create humans to simply wander aimlessly. Rather, it teaches us that we have a meaningful and higher purpose in life – to acknowledge God’s complete perfection, greatness, and uniqueness, and obey Him. There was a cruel oppressive tribal leader who lived during the time of Prophet Muhammad (peace be upon him). God revealed a verse to warn him:

God does not call this person a liar but calls his forehead (the front part of the brain) ‘lying’ and ‘sinful’, and warns him to stop. Numerous studies have found that the front part of our brain (frontal lobe) is responsible for both lying and voluntary movement and hence sin. These functions were discovered with medical imaging equipment which was developed in the twentieth century.

A physical force called surface tension prevents the waters of neighbouring seas from mixing, due to the difference in the density of these waters. It is as if a thin wall were between them. This has only very recently been discovered by oceanographers.

Some may claim that he copied it from learned people or scientists of his time. If it was copied, we would have expected to see all the incorrect scientific assumptions of the time also being copied. Rather, we find that the Quran does not contain any errors whatsoever – be they scientific or otherwise.

Some people may also claim that the Quran was changed as new scientific facts were discovered. This cannot be the case because it is a historically documented fact that the Quran is preserved in its original language – which is a miracle in itself. Allah says:

While this pamphlet has only focused on scientific miracles, there are many more types of miracles mentioned in the Quran: historical miracles; prophecies that have come true; linguistic and literary styles that cannot be matched; not to mention the moving effect it has on people. All these miracles cannot be due to coincidence. They clearly indicate that the Quran is from God, the Creator of all these laws of science. He is the one and same God who sent all the Prophets with the same message – to worship the one God only and to follow the teachings of His Messenger. Allah says:

“Soon We will show them Our Signs in the horizons and in themselves until becomes clear to them, that it (is) the truth. Is (it) not sufficient concerning your Lord, that He (is) over all things a Witness?” (Surah Fussilat 41:53)

To claim that scientific facts in the Quran are due to coincidence would be irrational. The best explanation is that God revealed this knowledge to the Prophet Muhammad (peace and blessings of Allah be upon him).

Just like the Quran contains knowledge about the natural world, it also contains information about the inner dimensions of our souls. It relates to our feelings, wants and needs. The Quran informs us that we have a purpose in life, and that following Allah’s guidance will lead us to inner peace in this life, and Paradise in the hereafter. And that rejection of his message will lead to depression in this life and Hellfire after death.