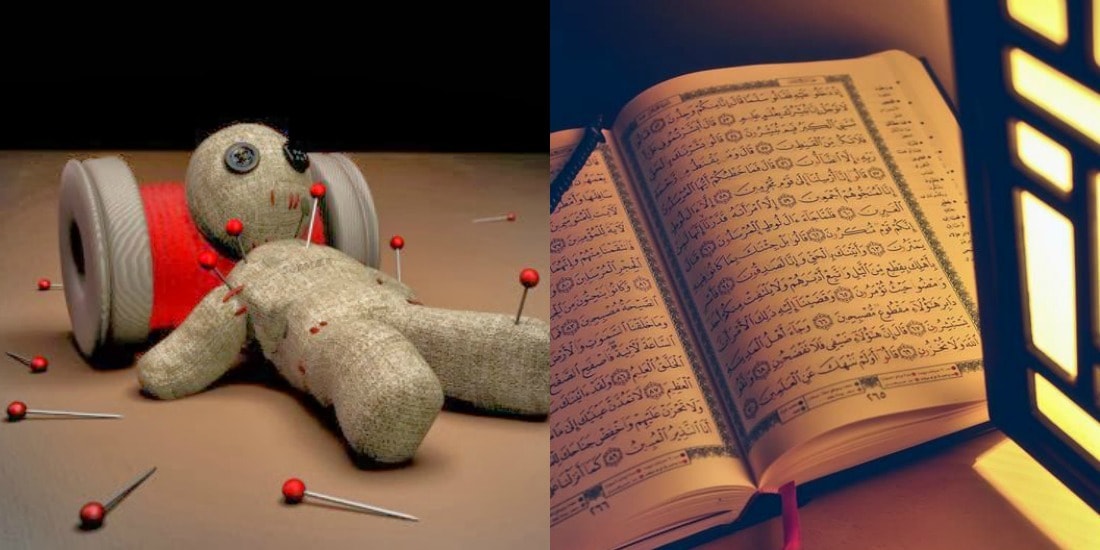 As Muslims, we have a strong belief in Allah Almighty as the Supreme Power. Satan was created from smokeless fire. Though he was not an angel, he was present amongst them in Heaven due to his obedience to Allah (God). When Allah created Prophet Adam (peace be upon him), He commanded those in Heaven to prostrate before Adam, but Satan refused out of pride and arrogance, saying. Allah says:

(Allah) said, “What prevented you that not you prostrate when I commanded you?” (Shaitaan) said, “I am better than him. You created me from fire and You created him from clay.” (Surah Al-A’raf 7:12)

Allah cursed Satan and banished him from Heaven. Satan requested an opportunity to mislead mankind, and Allah granted this request. In the same way, we also have to take some defensive measures against this devil, as we do not have the capacity to fight it, but we can only guard ourselves against it. Muslims know that only God can give it the power to resist sharr (sin) of the Lucifer from affecting its heart and soul. So, one must make a strict routine to think about the Greatness of the Dignified One, which will make it rely only on One Allah SWT.

Satan works on a common human weakness related to making one quickly assume something negative about the other. He thus infuses suspicion and doubt in the hearts of Muslims making them think badly about one another and provoking them against one another. Within Islam, obligatory duties take precedence as they establish the Muslim’s identity and foundation of belief. When Satan’s efforts to influence the staunch believer hit a dead end, he attempts to make the ‘recommended’ lawful deeds appear more inviting than ‘obligatory’ duties thus pulling the believers away from the obligatory duties of Islam.

The Traps of Satan

Disbelief in the Oneness of God

The foundation of Islam is the belief in the Oneness of God – having no partner, equal, son or rivals. Conversely, the greatest sin is to ascribe partners or equals with Allah.

Thus, tempting mankind into disbelief is Satan’s main focus. However, if Satan cannot mislead people to commit clear acts of disbelief, he resorts to more subtle means, such as the belief in superstitions, good luck charms, astrology and fortune telling. Such beliefs contradict the fact that Allah alone has power and knowledge over all things, and is the Only One Who can bring benefit or harm.

So, Allah has made it clear to mankind that Satan is their enemy and Satan’s goal is to divert mankind from the goal that Allah established for them, which is to follow and worship Allah by obeying His commands. Satan’s goal is to make mankind disobey Allah and divert them to the hellfire in the hereafter, which will also be Satan’s abode. Allah says in the Quran:

“Surely, Shaitan (Satan) is an enemy to you, so take (treat) him as an enemy. He only invites his Hizb (followers) that they may become the dwellers of the blazing Fire.” (Surah Faatir 35:6).

Believing in Allah’s will is an integral part of a Muslim’s faith. Another common way for Satan is, therefore, to make us compare our situations with those around us and leads us to feel discontented with Allah’s will. Satan thus diverts our attention from accepting the will of Allah to focusing on those who may have more of this life’s luxuries and thus arousing feelings of envy and jealousy. He also presents this life as the sole prize that cannot be missed and thus induces in us discontentment with our present situations in life. Allah says:

“And you cannot unless (it be) that Allah wills the Lord of the ‘Aalameen (mankind, jinn and all that exists).”

As Muslims, let’s ensure that we do not let Satan play with our imagination, conjuring up rosy pictures of the unattainable, making us visualize what could have been or should have been our destiny thus weakening our faith in Al Qadr. As Muslims, we should never forget Allah’s “will” in the ultimate determination of our destinies. We should also remember the Day of Judgment when all accounts will be settled and appropriate dues will be paid.

“Every soul (will) taste [the] death, and only you will be paid in full your reward (on the) Day (of) [the] Resurrection. Then whoever is drawn away from the Fire and admitted (to) Paradise then surely he is successful. And not (is) the life (of) the world except enjoyment (of) delusion.” (Surah Al-Imran 3:185)

Satan also induces false confidence in a person making him feel that he has reached perfection or that he is far better than others. This leads to vanity, self-admiration and distancing one from reality. As a result, the person starts viewing others patronizingly. We should, therefore, constantly remember Allah and look for opportunities of doing good deeds. We Muslims are familiar with the term “Ta`awuudh or Isti`adhah”, which has to be rehearsed before starting every action in general and reciting the Holy Quran especially. It is actually practicing “a uthu billahi minash Shaitaanir Rajeem”, which means “to take Allah`s protection from the accursed Satan”.

Daily Tips to Protect Yourself from Shaitan

Shaitan is the source of all evil

Everything that happens among the sons of Adam of kufr (disbelief of the Truth), murder, enmity, hatred, the spread of immorality and fornication, the public wanton display of women’s beauty, drinking alcohol, worshiping idols and other major sins, is all the work of Satan to corrupt mankind and to drive people from following the way of Allah and drag them to the Fire of Hell with him. So, let’s remember that when we find ourselves around evil or being lured by it, Satan is engaged in his work and our task is to fend off his plans. Allah says in the Quran:

“And if whisper comes to you from the Shaitaan, an evil suggestion, then seek refuge in Allah. Indeed, He [He] (is) the All-Hearer, the All-Knower.” (Surah Fussilat 41:36)

We should realize that when Satan fails to make us rebel against the key truths of Islam, he uses other tactics to distance us from our basic obligations by using the tools of laziness and procrastination and belittling in our minds the importance of those obligations. Allah SWT has clearly warned us to stay safe from the satanic evil by sticking to our Islamic devotion and beliefs. After being aware that Shaitaan is always ready to stray us from the right path, we have to safeguard our Eeman.

One of the effective ways to ignore Satanic whispers is to first be aware of them and then once recognized, to ignore them. So, we should be quick to recognize that when we feel is driven by our temptations to do bad or succumb to a feeling of laziness or procrastination to do good, we should ignore that waswaas.

Faith and Trust in Allah

Allah says in the Holy Quran:

“Indeed he, not for him (is) any authority on those who believe and upon their Lord they put their trust.” (Surah An-Nahl 16:99).

The message, therefore, is clear and that is to direct our attention not to what works in helping Satan in his goals but to do what our Creator wants for us. Allah says:

“And whoever fears Allah and keeps his duty to Him, He will make a way for him to get out (of every difficulty). And he will provide him from (sources) he never could imagine.” (Quran, Surah At-Talaq: 2-3)

Our inability to wake up for fajr at the right time is an influence of Shaitan, and we need to make deliberate efforts every day to fight him. Defeating Shaytaan is not a one-day thing. And his influence is certainly not something that we can assume will never get to us because of how righteous we think we are. Therefore, we should wake up every day with the determination to do our best to keep Shaytaan away from us.

Taking heed of Satan’s ways and becoming aware of his plans and goal can help us to be alert to his influence or persuasion and keep our defenses up. For this, it is essential to acquire Islamic knowledge from the right sources. It is very difficult for Satan to approach those dedicated to learning. Allah says in the Holy Quran: “And if an evil whisper comes to you from Shaitan (Satan), then seek refuge with Allah. Verily, He is All-Hearer, All-Knower.” (Quran, Al-Aaraf: 200)

Iblees asks for a reprieve until Day of Judgement

When Satan refused to obey Allah’s commands, Allah asked him for the reasons of disobedience of the Lord or the worlds. So, in the end – on the Day of Judgment – when we are all made to account for what we had done in this life, we won’t be able to blame Satan for the bad deeds that we did because of how he had incited us. Rather, this is what Satan will say on the Day of judgment. Allah says in the Quran:

“O Iblees (Satan)! What is your reason for not being among the prostrators?”

(Iblees (Satan)) said: “I am not the one to prostrate myself to a human being, whom You created from sounding clay of altered black smooth mud.” (Quran, Surah al-Hijr:32 – 33).

The battle against Satan can only be won if we are aware of his traps, and if we apply the strategies to defeat him. On the Day of Judgement, Satan will confess to his sins and mischief. He will declare before all of creation that Allah is the One who tells the truth and that he (Satan) is a liar.

Let us remember that the confidence Satan expressed in his success to mislead people, stems from his assurance that most people are ungrateful to their Creator, Lord and Master Allah the All-Mighty. Allah says in the Quran that Satan claimed:

It is, therefore, man’s ingratitude to Allah that Satan banks upon in getting the man off track. So one of the antidotes to Satanic whispers is to be in a state of constant consciousness of Allah (SWT), and thankfulness for all His Blessings upon us.

To conclude, let’s remember that when we fall prey to our temptations and commit the wrong, let’s remind ourselves that even Satan knows the truth, yet he is determined to make us earn Allah’s anger and on the Day of Judgment, he will simply say, “…So blame me not, but blame yourselves…”

We should, therefore, be careful in not sacrificing the obligatory deeds at the expense of the less important deeds. We ask Allah the Almighty, by His most beautiful Names and sublime Attributes, to forgive our sins and grant us refuge from the traps of Satan.