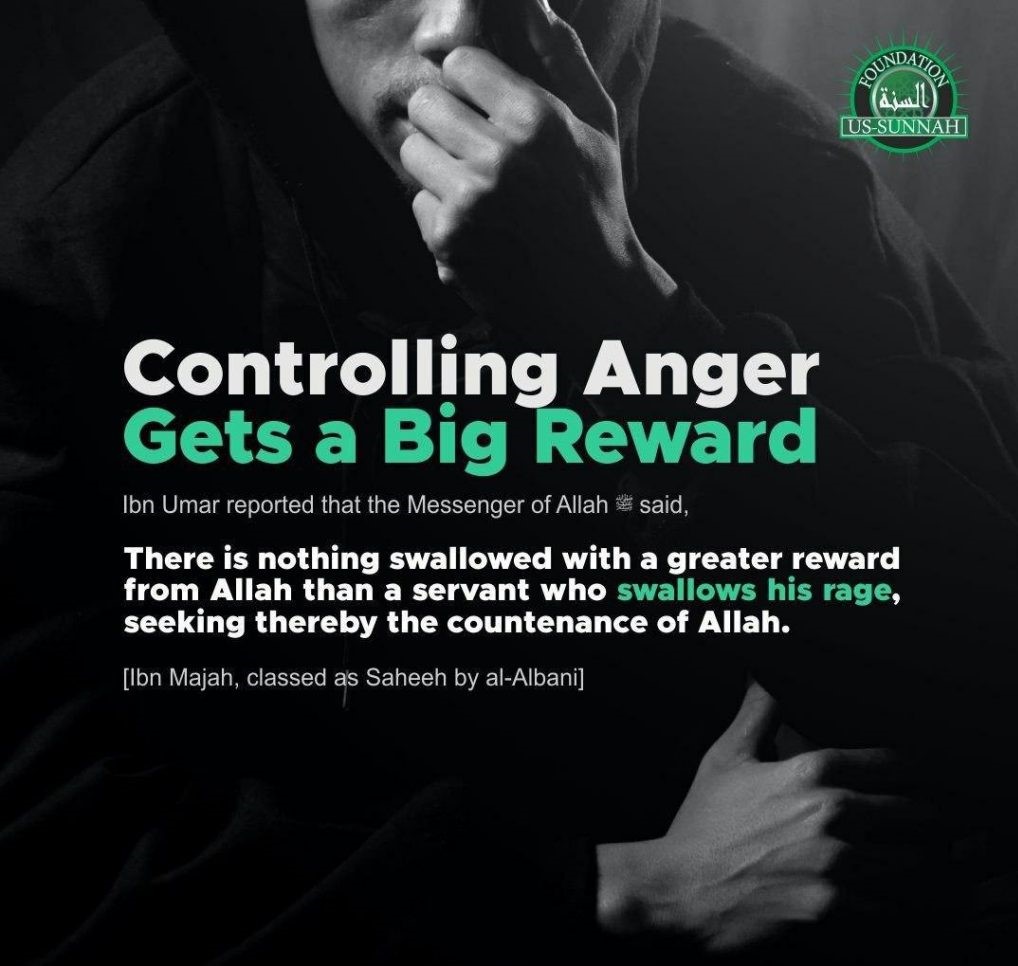 Anger can destroy lives and relationships and Prophet Muhammad called it hot coal on the heart of a descendant of Adam. There is no foolproof way to eliminate anger because it is a natural human emotion. Islam, however, gives us many examples of how to control anger and how to channel it into acceptable actions. There are also distinct advantages to following the guidelines set out in Islam.  It pleases God, and the person controlling their anger is rewarded. Allah says:

Anger is a natural feeling it can have negative effects on those who allow it to control them, and adverse effects on those around them.  Anger can destroy relationships, health, property, and livelihood. Uncontrolled anger is one of the tools of Satan and it can lead to many evils and tragedies.  For this reason, Islam has a great deal to say about the emotion of anger. Allah says:

Human naturally has an animal instinct which sometimes they get angry and feel hate toward others, but the anger is uncontrollable. It is probably the Shaitan (devil) who manipulates and spreads hatred toward man and make human uncivilized. If a human feels the anger would be uncontrollable, then immediately saying a refuge with Allah from any Shaitan’s manipulation and temptation. Allah says:

There are some inspirational points on anger and how to control it:

Anger is a very serious disease, and Islam warns Muslims against its evil consequences. Anger is a matter of choice. We can’t be burst into anger unexpectedly, we choose to be that way. The hadith below told us that our Prophet (peace and blessings of Allah may be upon Him) reminded us that Muslims have a choice to decide whether they need to be in anger or not. Allah says:

“Those who spend (in God’s Cause) in prosperity and adversity, who repress anger, and who pardon the people; verily, God loves the good-doers.” (Surah Al-Imran 3:134)

Anger is a destabilizing thought. It is the most dividing emotion between friends; it takes away judgment, leads to depression, madness and wrong actions that we would repent later on when we are not angry. Whenever you feel angry or upset, think twice to be in anger. Sometimes, anger can be more toxic than poison. Within minutes, you can destroy your relationship, or even it can occur bloodshed. By bursting into anger, we don’t automatically confirm our power. Allah says:

Anger is a powerful emotion, if it is not controlled properly, then it will destructive to surrounded. Uncontrollable anger leads to arguments, physical fights, physical abuse, assault, and self-harmful. It is as well effect to a long time health problems. For those who can keep away from anger and deal with self-control, Allah promises a great reward. Allah says:

“Whoever believes in Allah and the Last Day, let him speak goodness or remain silent.” (Ṣaḥiḥ Muslim 47)

Anger is lawful in cases of religious affairs when its honours are at stake. It is an effective preventive measure to safeguard the dignity of man.  A person who has no anger is called a coward because he has got no true faith in Allah.  The person fears the creation and not the creator. This doesn’t give the right for youngsters to become angry with parents when they don’t get what they want.

Anger is a natural, healthy emotion. However, it can arise out of proportion to its trigger:

Anger can be caused by both external and internal issues. You could be angry at a specific person (such as a co-worker or supervisor), or your anger could be caused by your problems, such as the remembrance of a disagreement with your spouse or parent. Controlling anger sometimes is very difficult. But forgiving others instead of acting according to one’s anger on such occasions is, Allah, says:

“The strong is not the wrestlers. Verily, the strong are only those who control themselves when they are angry.” (Bukhari 5763)

Shouting, yelling, and swearing when we are burst into anger doesn’t solve anything at all. It only embarrasses you because eventually, people will stay away from you. The best way to spend your emotion is by choosing not to be in anger. in fact, an act of real bravery. It is quite a demanding task to suppress one’s emotions, particularly at the time of burning rage (anger).

How do you express your anger? Consider these questions in gauging your anger responses:

Believe it, anger only gives you more harm than good. When you’re in such bad emotion, your circumstance will be followed by other negativity like frustration, scepticism, cynicism, etc. By understanding that anger is destructive, you need to learn how to prevent yourself from not being in anger. Besides that, anger is so toxic in your relationship with other people. Allah says:

Anger is a destructive emotion that can even spoil or permanently damage relationships which can even lead to evil consequences or life tragedies. Anyone who bridles this angry horse and curbs his anger for the sake of Allah, Allah will invite him before all His creation on the Day of Resurrection and will reward him by giving him the choice and option of choosing any one of the Huris (fair-coloured damsels of Paradise). May Allah benefit us from this opportunity. Ameen!