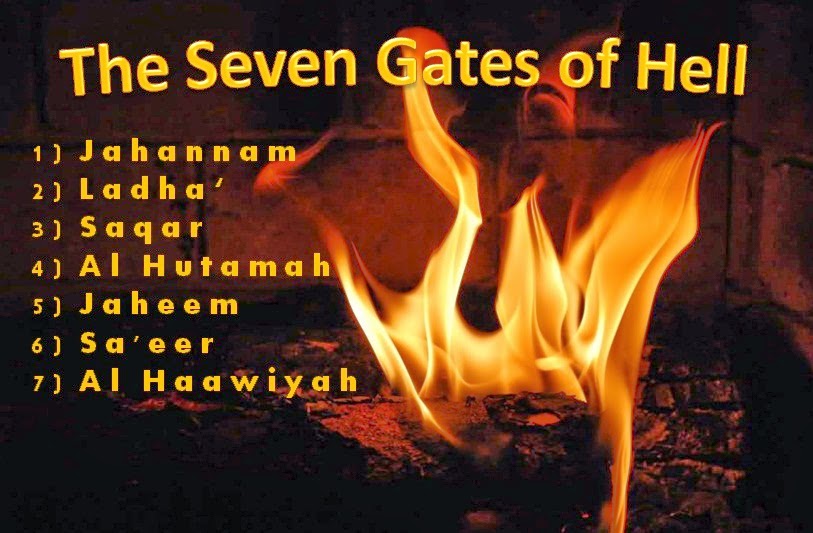 Islamic beliefs about the afterlife are very important. Muslims believe in the continued existence of the soul and a transformed physical existence after death. Islam teaches that there will be a day of judgment when all humans will be divided between the eternal destinations of Paradise and Hell. The day of judgment is described as passing over Hell on a narrow bridge to enter Paradise. Those who fall, weighted by their bad deeds, will remain in Hell forever. Allah says:

“Indeed, those who believed and those who became Jews and the Christians and the Sabians – who believed in Allah and the Day [the] Last and did righteous deeds, so for them (is) their with their Lord and no fear on them and not they will grieve.” (Surah Al-Baqarah 2:62)

“A parable (of) Paradise which is promised (to) the righteous. Therein (are) rivers of water not polluted, and rivers of milk does not change its taste, and rivers of wine delicious for (the) drinkers, and rivers of honey purified, and for them therein of all fruits and forgiveness from their Lord like he who (will) abide forever in the Fire and they will be given to drink water boiling so it cuts into pieces their intestines.” (Surah Muhammad 47:15)

Islam teaches that Hell is a real place prepared by God for those who do not believe in Him, rebel against His laws, and reject His messengers. Hell is an actual place, not a mere state of mind or a spiritual entity.  The horrors, pain, anguish, and punishment are all real, but different from their earthly counterparts.  Hell is the ultimate humiliation and loss, and nothing is worse than it: Allah says:

“Our Lord, indeed [You] whom You admit (to) the Fire then surely You (have) disgraced him, and not for the wrongdoers (are) any helpers.” (Surah Al-Imran 3:192)

Muslims believe in the death and eternal life which comes after death. For leading a good life what actions and qualities are desirable, what impact will be in our hereafter life due to our actions and deeds in this life, we should know about the concept of heaven and hell. We Muslims believe on Judgment Day after that Allah Almighty will decide based on individual deeds were to send in Jannah or Jahannam. Allah says:

“See how We preferred some of them over others. And surely the Hereafter (is) greater (in) degrees and greater (in) excellence.” (Quran, 17:21)

Heaven in the Holy Quran

Throughout our lives, we compete to believe and serve Allah Almighty so that we can gain Jannah in the hereafter. We can just imagine how paradise will be look alike. Only Allah Almighty knows it but He (SWT) describes it for us in the Holy Quran.

People Who Will Go to Hell in Islam

According to the Quran, the following people shall all end up in hell:

“And consciously revere the Fire which is prepared for the disbelievers.” (Surah Al-Imran 3:131)

Names of Hell in the Qurʾān

Hell Fire has different names in Islamic texts.  Each name gives a separate description.  Some of its names are:

Jaheem – fire –  because of its blazing fire.

Jahannam – Hell – because of the depth of its pit.

Latham – blazing fire – because of its flames.

Sameer – blazing flame – because it is kindled and ignited.

Saqar – because of the intensity of its heat.

Hatamah – broken pieces or debris – because it breaks and crushes everything that is thrown into it.

Paradise and Hell Presently Exist and are Eternal

Hell exists at present and will continue to exist forever.  It will never die down, and its inhabitants will remain in it forever.No one will come out of Hell except for sinful believers who believed in the Oneness of God in this life and believed in the specific prophet sent to them (before the coming of Muhammad).

“Surely, God has cursed the disbelievers, and has prepared for them a flaming Fire wherein they will abide forever.” (Quran 33:64)

The polytheists and unbelievers will reside in it forever. This belief has been held from classical times and is based on clear verses of the Quran and confirmed reports from the Prophet of Islam. The Quran speaks of Hell in the past tense and states that it has already been created:

The Keepers of Hell

Mighty and stern angels stand over Hell who never disobey God.  They do precisely as ordered.  God says:

“O you who believe, save yourselves and your families from a Fire whose fuel is men and stones over which are (appointed) angels, stern and severe, who flinch not (from executing) the commands they receive from God, but do (precisely what) they are commanded.” (Quran 66:6)

One should not think that the inhabitants of Hell will be able to overcome the keepers of Hell because there are just nineteen of them.  Every one of them has the strength to subdue all humanity by himself.  These angels are called the Guards of Hell by God in the Quran: “And those in the Fire will say to the Guards of Hell, ‘Call upon your Lord to lighten for us the torment for a day!” (Quran 40:49)

Hell is an eternal abode for most who enter it. A minority of Muslim scholars hold that hell will eventually end, but a majority maintain that it is eternal. Several verses in the Qurʾān describe hell as eternal:

The food of the people of hell is described as only increasing in torment. It does not provide nourishment nor does it relieve hunger.

“No food will there be for them except a bitter, thorny plant which neither nourishes nor avails against hunger.” (Quran 88:6-7)

There is a special tree in a hell called zaqūm that people will it from. This tree is rooted at the bottom of hell and its branches are described as being similar to the heads of devils.

Holy Quran also mentions who will enter hell. For sure disbelievers in Lord and especially if they die in that state of, hypocrites, idolaters, the arrogant, those who treat religion as a pastime, have broken the treaty, made fun of Allah’s Messengers or on the reality of Day of Judgment. Also, murderers, ones misappropriating inheritance especially of orphans, slandering chaste women or claiming divinity for themselves on their own will reside in hell.

At most of the places where Hell is mentioned, the beauty and peace of Heaven are also mentioned to show the contrast between them. So Muslims are obligated to pray five times a day and ask forgiveness and protection from hellfire in each prayer from Allah Almighty.