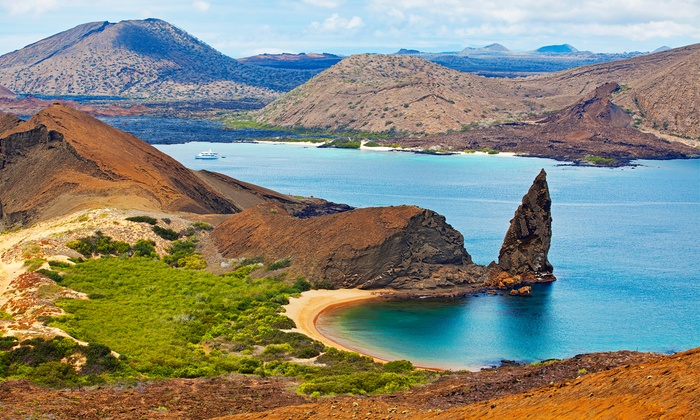 The Galápagos Islands is a volcanic archipelago in the Pacific Ocean. It’s considered one of the world’s foremost destinations for wildlife-viewing. A province of Ecuador, it lies about 1,000km off its coast. Its isolated terrain shelters a diversity of plant and animal species, many found nowhere else. Charles Darwin visited in 1835, and his observation of Galápagos’ species later inspired his theory of evolution.

The Galapagos Islands are a bucket-list destination for good reason: Thanks to a lack of natural predators, friendly wildlife such as playful sea lions and gigantic sea tortoises let visitors get up close and personal. This archipelago of about 19 islands and many smaller islets sprinkled 620 miles off Ecuador’s coast in the Pacific Ocean is a double World Heritage site (both land and sea are protected) and served as the inspiration for Charles Darwin’s Theory of Evolution. Each island boasts its own unique landscape, ranging from barren black, volcanic rocks to swaths of white sand beaches melting into gemstone-blue waters.

The cooler, dryer season is June through November, thanks to the Humboldt Current which brings chilly water and cooler temperatures (in the 70s). Though the seas are rougher, experienced divers believe it’s the best time to visit because colder water attracts even more fantastic marine life (such as big schools of hammerhead sharks). It’s also when visitors have a better chance of spotting legendary whale sharks at Wolf and Darwin islands.