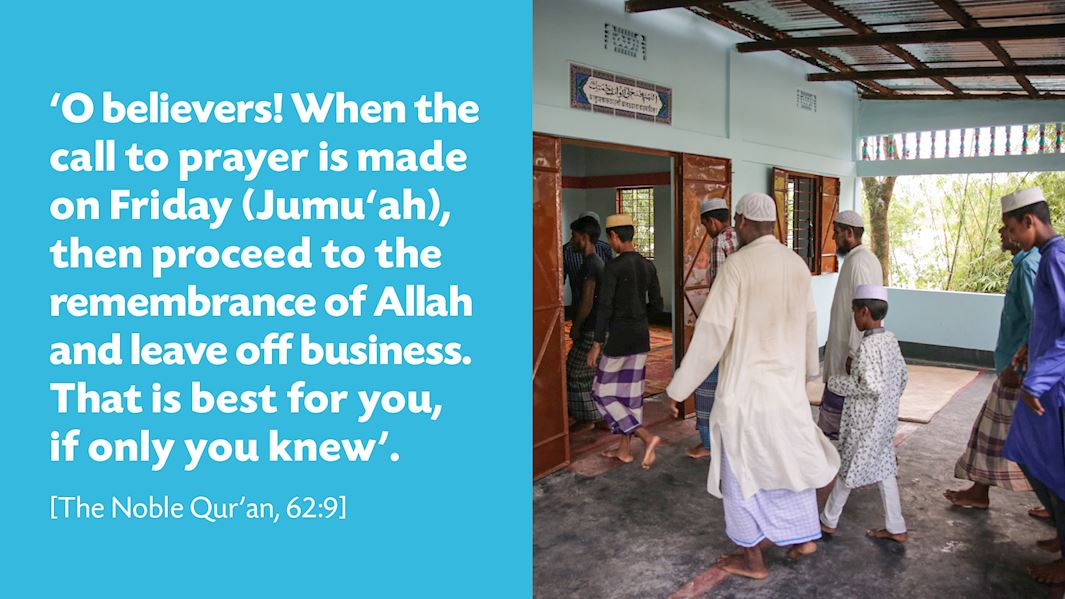 One of the blessings with which the Muslim nation has been endowed is the day of Jumu’ah or Friday. Friday is a very important day for Muslims. It is more significant and more beneficial than any other day of the week. Jumu’ah prayer is one of the obligatory acts in Islam and one of the great gatherings of Muslims. Giving in charity during this day is more virtuous than any other day.

“The best day the sun rises over is Friday; on it Allah created Adam. On it, he was made to enter paradise, on it he was expelled from it, and the Last Hour will take place on no other day than Friday.”(Tirmidhi)

A believer’s entire life is one of worship; even celebrations are conducted as worship. Imaam Ibn Katheer,

said, “It was named Jumu’ah because it is derived from the word Al-Jam’ in Arabic which means to gather, as Muslims gather on this day every week, and Allah has commanded the believers to gather for His worship, as He says that which means: Allah says:

It is the day that Muslims gather together to pray in congregation. Directly before the prayer, they listen to a lecture designed to empower them with valuable knowledge about God, and the religion of Islam. It is a blessed day that has been designated as such by God, Almighty; no other day of the week shares its virtues. While there is no special place or special time to worship God, there are moments, days, or times that God has made more superior; Friday is one of those times. Allah says:

“O you who believe! Fulfil the contracts. Are made lawful for you the quadruped (of) the grazing livestock except what is recited on you, not being permitted (to) hunt while you (are in) Ihram. Indeed, Allah decrees what He wills. ” (Surah Al-Ma’idah, 5:1)

As we know the congregation prayers are strongly emphasized in the religion of Islam, so it is the Day on which Muslims in a large amount as compared to other days gather together for the Friday Prayer. In the Holy Quran, Allah Almighty says about Friday Prayer in a way that.

“The best day the sun rises over is Friday; on it Allah created Adam. On it, he was made to enter paradise, on it he was expelled from it, and the Last Hour will take place on no other day than Friday” (Tirmidhi).

Friday is a special day; performing the congregational prayer on this day holds special significance in the life of a Muslim. Our beloved Prophet (PBUH) used to wear clean and new (washed) clothes, used to take baths, used fragrance and also wear surmah for this day that is Friday.

Cleansing is known as the half faith of Muslims in the religion of Islam. It is obligatory for every Muslim to be clean before offering prayer. There are some preparations that every Muslim should prepare for Friday prayer before going to the mosque.

There are some good deeds that you should perform on this blessed day are mentioned below:

Blessings and Virtues of Friday Prayer

There are many benefits and virtues regarding Jummah Prayer some of them we will discuss below:

“Then when is concluded the prayer, then disperse in the land and seek from (the) Bounty of Allah, and remember Allah much so that you may succeed.” (Surah Al-Jumu`ah 62:10)

Friday is the most blessed day of the week in the Islamic religion. Therefore, in order to observe this day in a rightful manner, a Muslim must make sure that he or she makes special preparations that make this day stand apart from the rest of the days of the week. Friday is a day of congregation, a day of celebration and a day of supplication. May Allah give us the chance to offer Friday Prayer regularly so that we can get all its blessings and rewards! Ameen.