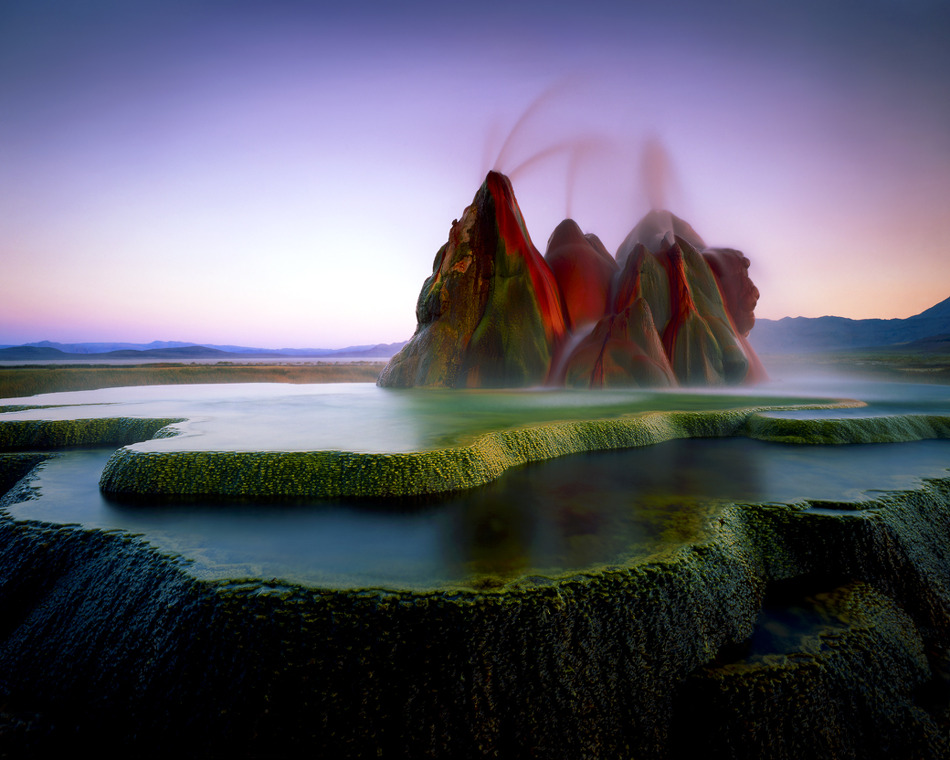 Fly Ranch Geyser also known as Fly Geyser is a man-made small geo-thermal geyser, located in Washoe County, Nevada, approximately 20 miles north of Gerlach. It is located near the edge of Fly Reservoir and is only about 5ft high, but 12ft wide, counting the mound on which it sits.The Fly Ranch is private property and is owned by Todd Jaksick. There is a high fence and a locked gate, topped with spikes to bar trespassers from entering. The only access is a dirt road, but the geyser is large enough to be seen from the road.

The geyser contains several terraces discharging water into 30-40 pools over an area of 74 acres. A prior well-drilling attempt, in 1917, resulted in the creation of a man-made geyser of boiling water close to the currently. active Fly Geyser. It created a pillar of calcium carbonate about 12ft tall, but ceased when the Fly Geyser began releasing water in 1964. Two additional geysers, in the area, were created in a similar way an continue to grow. The 1st geyser is approximately 3ft and is shaped like a miniature volcano and the 2nd geyser is about 5ft and is cone-shaped.

This world offers some rather incredible natural wonders – many of which are so stunningly beautiful, it’s hard to believe they’re real, including the Fly Geyser.It sits on private land in the Black Rock Desert of Nevada about one-third of a mile from State Route 34. Once an ordinary well, drilled in the early part of the 20th century, over time, piping hot geothermal waters began rising through its cracks and up to the surface of the ground to become it is today.This natural, undeveloped area presents a beautiful and unique attraction which is open to the public.

Traveling via State Route 34, the geysers display themselves from a distance. These three hot springs are also known as the THREE BUDDHAS, because the shapes resemble statues of Buddha. Even though nature has sculptured these hot springs through calcium carbonate deposits and painted them deep, vibrant rusty, reddish and green colours which are a result of thermophilic algae, flourishing in moist and hot environments, they are not natural springs.