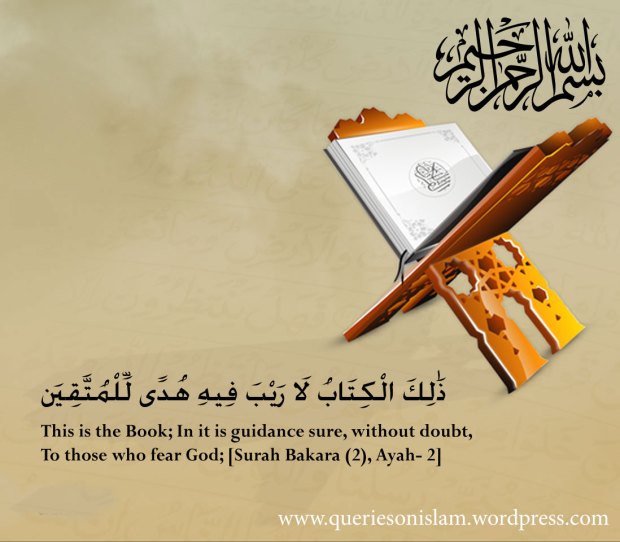 The universe must necessarily have a Creator because it is impossible for the universe to have created itself or to have been created by nothing. Therefore, there must have been a Creator who provided the initial force and energy needed to set the universe in motion. This is sometimes called the cosmological argument. Allah says:

“Were they created by nothing, or were they the creators of themselves? Or did they create the heavens and the earth? Rather, they are not certain.” (Surah At-Tur 52:35-36)

Newton’s first law of motion tells us that bodies at rest will stay at rest unless a force acts upon them. Therefore, the initiation of the universe required force and energy to originally set it in motion. This force and energy is the work of Allah the Exalted, the Creator. This argument was used by Imam Abu Hanifa to confound the atheists who challenged him. This argument agrees with sound reasoning and has been accepted by philosophers and theologians across different religions throughout history. Allah says:

“They say: There is nothing but our worldly life, and we live and die and nothing destroys us but time. They have no knowledge, but rather they only speculate.” (Surah Al-Jathiyah 45:24)

Knowledge of God’s existence is often taken for granted by believers. The authentic religious experience – affirmed again and again in a Muslim’s daily life – makes faith in God feel so natural as to be assumed. But belief in God and the quest for existential truth is not an easy prospect for many people, especially in a social environment in which faith is derided as superstition, wishful thinking, or even as a dangerous fantasy. Allah says:

“Verily, in the alternation of the night and the day and in what Allah has created in the heavens and the earth are signs for a people who would be righteous.” (Surah Yunus 10:6)

The Quran inspires conviction by appealing to the aspects of the inner life of human beings, namely, to the heart and the mind. Intuition and experience work in tandem with logic and reason to arrive at a state of certainty in faith. All people were born to be believers in God, and the revelations of the Prophets simply awaken and reinforce the disposition that is already inside us. Even polytheists, who believe in multiple gods and deities, often believe that there is an even higher power, and even greater God over all of them. Allah says:

“Do they not see that We made the night for resting therein and the day giving sight? Verily, in that are signs for a people who believe.” (Surah An-Naml 27:86)

Man’s daily life, in addition to external connections with the world of creation, springs from an astonishing system within his being that has amused the perceptive minds of the scientists of the world engaged for many centuries in observation of its outward things. Each day another layer is removed from its secrets, but still, their knowledge about the unknown is rather insignificant. Allah says:

“Do you not see that Allah sends down rain from the sky, and We produce thereby fruits of varying colours? And in the mountains are tracts, white and red of varying shades and black, and among people and moving creatures and grazing livestock are various colours similarly.” (Surah Fatir 35:27-28)

If a human being possesses what is needful in the system of being of a normal man, he is perfect. But if he lacks one of them, for instance, if he does not have a hand, foot, or an eye, he is deficient in that respect. Allah says:

“Then let mankind look at his food, how We poured down water in torrents, then We broke open the earth, splitting it with sprouts, and caused to grow within its grain, and grapes and herbage, and olive and palm trees, and gardens of dense shrubbery, and fruit and grass as enjoyment for you and your grazing livestock.” (Surah Abasa 80:24-32)

Observation of the interconnected components of this magnificent world, it’s an astonishing usual revolution, its dazzling minute and interrelated systems which are at work here and there, as a result of which various phenomena move in an utmost orderly manner towards a specific goal and a particular destination, informs any wise man that the existence and survival of the world of existence and all that is associated with it originate from an Immortal One and Power. Allah says:

“Certainly, did We create man from an extract of clay? Then We placed him as a sperm drop in a firm lodging. Then We made the sperm-drop into a clinging clot, and We made the clot into a lump of flesh, and We made bones from the lump, and We covered the bones with flesh; then We developed him into another creation. So blessed is Allah, the best of creators.” (Surah Al-Muminun 23:12-14)

Thus, from the sun and the moon in the heavens to the creatures on the earth to the innermost parts of the human being – all of these point to the power and deliberate design of the Creator. It is human instinct (fitrah) to recognize these signs as evidence of the Creator’s purpose. Allah says:

This Immortal One has created the world and all its inhabitants with His Boundless Might and Infinite Knowledge. Having placed His creatures in the cradle of nurturing, He leads them to an ideal perfection by His blessing. He has an immortal life and is Omnipotent and Omniscient.

The Almighty Allah states in the Holy Quran:

(Allah is Living, Wise, Clear-sighted, Hearing, Mighty, Creator, and Free from want.) Thus the Almighty Allah possesses all epithets of perfection and His Holy Presence is Pure and Immaculate. Because if He had a deficiency, He would be dependent on that respect and a superior god would have to provide His needs. Allah says:

“We will show them Our signs in the horizons and within themselves until it becomes clear to them that it is the truth. But is it not sufficient concerning your Lord that He is, over all things, a Witness?” (Surah Fussilat 41:53)

Any goodness and beauty existing in the world and any attribute of perfection that can be conceived are favours that the Almighty Allah has bestowed upon His creatures, and through this means satisfied one of the needs of creation. Certainly, if He lacked that perfection, He would be unable to grant favours to others and would have a share in the needs of people. Allah says:

فَأَقِمْ وَجْهَكَ لِلدِّينِ حَنِيفًا ۚ فِطْرَتَ اللَّهِ الَّتِي فَطَرَ النَّاسَ عَلَيْهَا ۚ لَا تَبْدِيلَ لِخَلْقِ اللَّهِ ۚ ذَٰلِكَ الدِّينُ الْقَيِّمُ وَلَٰكِنَّ أَكْثَرَ النَّاسِ لَا يَعْلَمُونَ: “So direct your face toward the religion, inclining to truth. Adhere to the nature of Allah upon which He has created all people. No change should there be in the creation of Allah. That is the correct religion, but most of the people do not know.” (Surah Ar-Rum 30:30)

“If you asked them: Who created the heavens and earth? They would surely say, Allah. Say: All praise is due to Allah, but most of them do not know.” (Surah Luqman 31:25)

Actions performed by the Capable and Independent Allah can be nothing but blessings. By granting His innumerable graces, He lets everyone enjoy them. Without being dependent upon anyone else, Allah provides part of the needs of the creatures. Allah says:

“If you asked them who created them, they would surely say Allah. So how are they deluded?” (Surah Az-Zukhruf 43:87)

When we see an enfeebled needy, we try to meet his demands to the best of our ability. We help a desperately poverty-stricken man or take a blind man’s hand in our own and lead him to his destination. We consider these acts as compassion and blessing and thus regard them as praiseworthy deeds. Allah says:

“Say: Who rescues you from the darkness of the land and sea when you call upon Him imploring aloud and privately: If He should save us from this crisis, we will surely be among the thankful. Say: It is Allah who saves you from it and from every distress, yet you still associate others with Him.” (Surah Al-An’am 6:63-64)

Our relation to God is similar to those organisms observed by the scientists, except that our finite existence is even feebler as compared to the infiniteness of the Supreme Being. We can become aware of God through His signs, but we can never comprehend the full measure of God. The reality of God is too vast to be seen directly or measured with instruments. If the cosmic veil had been lifted, the awesomeness that is God Almighty would eradicate us. Allah says:

“Say: Who rescues you from the darkness of the land and sea when you call upon Him imploring aloud and privately: If He should save us from this crisis, we will surely be among the thankful. Say: It is Allah who saves you from it and from every distress, yet you still associate others with Him.” (Surah Al-An’am 6:63-64)

The spiritual path does require, however, a sustained and patient effort to seek out the truth, to answer the most important existential questions, and to remove specious doubts. Hence, God does not speak directly to human beings, but rather through revelations delivered to Prophets. Allah says:

“When adversity touches you at sea, lost are all those you invoke except for Him. But when He delivers you to the land, you turn away from Him. Ever is man ungrateful?” (Surah Al-Isra 17:67)

For this reason, every human being will call out to Allah during times of calamity, as it is an innate instinct to turn to the Creator in times of distress. The only religion whose book has taken upon itself to be preserved from any such distortions is the religion of the last of God’s prophets, namely Muhammad, may the mercy and blessings of God be upon him. Allah says:

“When they board a ship, they supplicate Allah, being sincere to Him in religion. But when He delivers them to the land, at once they associate others with Him.” (Surah Al-Ankabut 29:65)

Human nature also recognizes objective moral values shared across religions and cultures throughout time, known to philosophers as “natural law.” This is sometimes called the moral argument. It might be asked why some people disbelieve in the Creator if sound human nature inclines toward faith. The answer is that Allah has created life as a test involving various influences such as the temptations of Satan and selfish desires. Although human nature inclines toward faith, a person must ultimately choose to pursue faith in the Creator over the influences of unbelief.