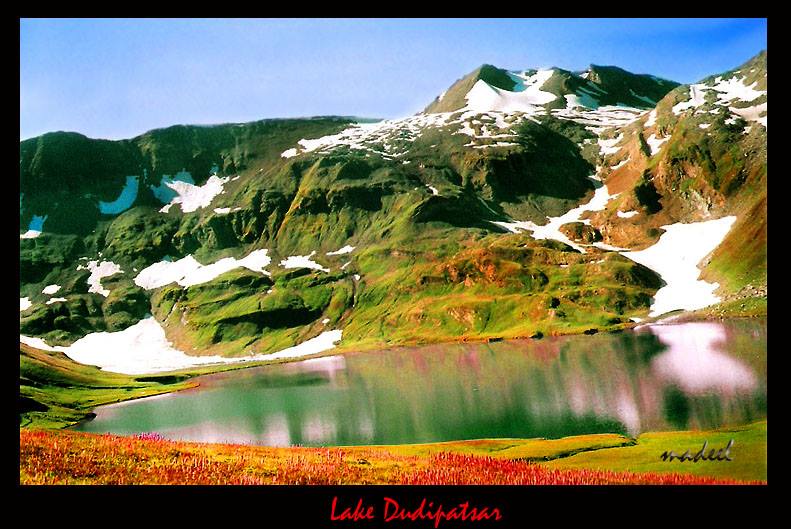 Dudipatsar Lake beautifies Kaghan Valley in the Mansehra District of KPK province. The lake’s water is a beautiful greenish blue hue and very cold, at an elevation of 3,800 meters.One of the most beautiful and magnificent lakes of Pakistan is the awe inspiring Dudipatsar Lake which is also called the Dudipat Lake. The amazing lake, filled with magnificent blue green water, is in a valley of snow covered peaks located in a national park called Lulusar-Dudipatsar.

The name of the lake has been created by two local words, “dudi” and “pat“. Dudi is used to mean white in the local language and pat is used to denote high mountains which are common in the area where the lake is located. The last word “sar” is a commonly used word for “lake”. According to locals the name has been given to the great lake due to the heavenly white snow that covers the mountains surrounding the lake.

The Dudipatsar Lake is located at an approximate height of 3,800 meters (almost 12,500 feet) above the sea level. However, the mountains forming the valley are much higher and many of them are covered in snow throughout the year. The average height of the mountains surrounding the lake is around 4,800 meters above sea level. Dudipatsar is located in the very northern part of Kaghan Valley, located in Mansehra District, KPK Pakistan.