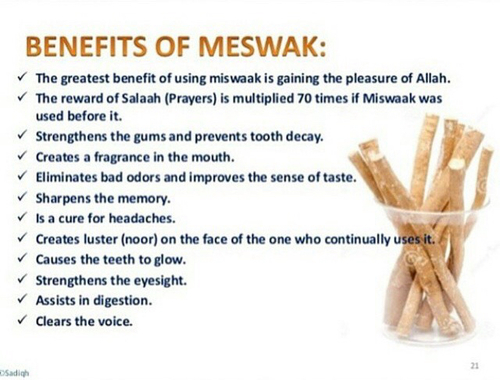 Islam also tells Muslims the things that are beside their religious obligations which are good for their life. The Sunnah of Prophet Muhammad (PBUH) is the prime example for Muslims in this regard and through his Sunnah, Muslims find different habits and traditions which they can incorporate into their lives to live it in a better way. Miswak cleans the mouth, polishes the eyes, removes bad breath and dirt in the mouth, whitens the teeth, gives vigour to the gums, promotes digestion, stops phlegm production, and increases the rewards of salat. It purifies the mouth,

“Four things are amongst the practices of the Ambiyaa – circumcision, application of perfume, Miswaak, and marriage.” (Tirmidhi)

Out of the numerous Sunnahs of Prophet Muhammad (PBUH), one of the most commonly observed Sunnah is Miswaak. It refers to using the stick from a tree for the purpose of cleaning teeth. It was what Prophet Muhammad (PBUH) used to do and there are various hadiths regarding Miswak as well. The lines below discuss the importance of Miswaak is a Sunnah in Islam.

The Miswak is a 100% organic, natural & traditional toothbrush that is obtained from the twigs of the Arak Tree (also called Peelu Tree). Although a few other trees can be used as well, such as walnut and olive trees.

Here are some advantages of the Miswaak:

The first one is the obvious one as Miswaak helps keep the mouth clean, therefore, it is healthy for the mouth and for the body as well. The second thing mentioned in the hadith, that supersedes the first benefit is that Allah Almighty gets pleased from those who use. Miswaak.

How To Use Miswak Stick?

Miswak can either be used as a standalone, or as an adjunct to your regular toothbrush and toothpaste. To use Miswak effectively, keep these in mind.

At another place, Prophet Muhammad (PBUH) said in His hadith:

“Make a regular practice of the Miswaak, for verily, it is healthy for the mouth and it is a Pleasure for the Creator (i.e. Allah is pleased with the Muslim who uses the Miswaak).” (Bukhari)

No other hadith explains and emphasizes the importance of Miswaak other than this hadith. This hadith clearly shows that Prophet Muhammad (PBUH) would use Miswaak to such an extent that the front of His mouth would feel peeled off to Him. Therefore, if Prophet (PBUH) did something with such intensity and passion, then it becomes more than imperative for a Muslim to follow His footsteps as well and make Miswaak a part of daily life. At another place in another hadith, Prophet Muhammad (PBUH) said:

“Was it not for my fear of imposing a difficulty on my Ummah I would have ordered that the Miswaak be used for every Salaat.” (Bukhari)

Miswaak is one of the health-related Sunnahs of Prophet Muhammad (PBUH). However, Islam has not made it only health-related, rather by making it the Sunnah of Prophets and associating it with pleasing of Allah Almighty, Islam has attributed dual benefits with Miswaak. Hence, those who use Miswaak, stay healthy in addition to earning rewards against this act as well.