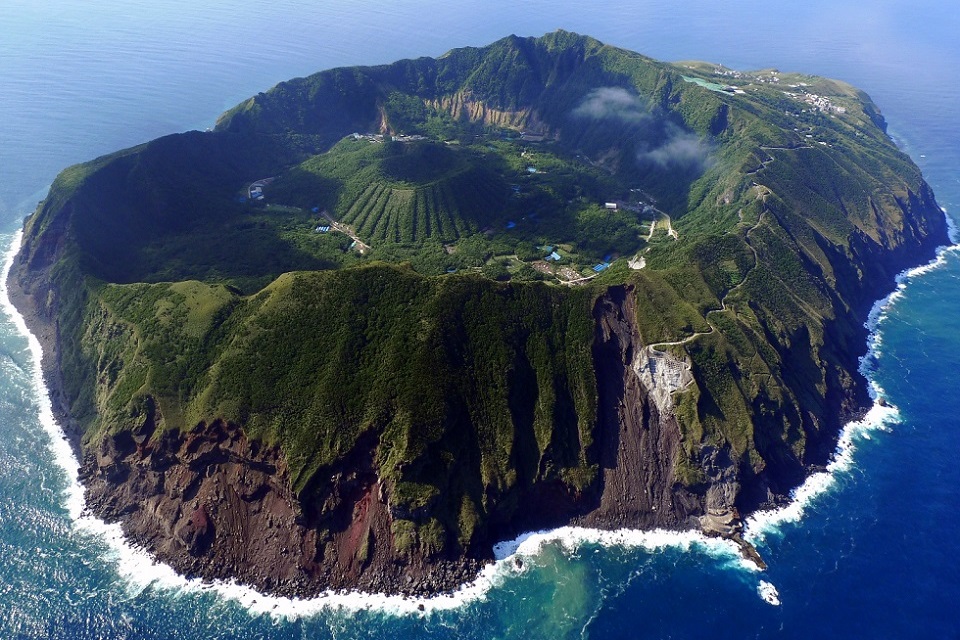 Aogashima is a volcanic Japanese island in the Philippine Sea. The island is administered by Tokyo and located approximately 358 kilometres (222 mi) south of Tokyo and 64 kilometres (40 mi) south of Hachijō-jima. It is the southernmost and most isolated inhabited island of the Izu archipelago.There is an island, which can be reached by helicopter or ferry from Japan , inhabited by only 200 people, which has the characteristic of being formed by two volcanic craters, located one inside the other.

The village of Aogashima administers the island under Hachijō Subprefecture of Tokyo Metropolis. The island’s area is 8.75 km2 (3.38 sq mi) and, as of 2014, its population is 170. Aogashima is also within the boundaries of the Fuji-Hakone-Izu National Park.

The island is called Aogashima and is part of the Japanese Izu archipelago. It is located about 200 miles south of Tokyo, in the Philippine Sea. The island is part of the territory of Japan and is governed by Tokyo. On it there are a school and a post office that offer their services to the few hundred inhabitants that populate it.

Aogashima is characterized by the presence of a volcanic caldera inside another larger caldera, which constitutes the island itself. Observing the island from above in photography, one realizes how the shape of the same appears mysterious just because of this aspect.

It appears largely untouched as human activities and settlements are concentrated in only one of its areas. There is the possibility to make excursions along the slopes of the central volcano and to camp right in their vicinity. The formation of high temperature volcanic vapors allows the activation of a public sauna , the most suitable place to relax after a day dedicated to the discovery of the island.