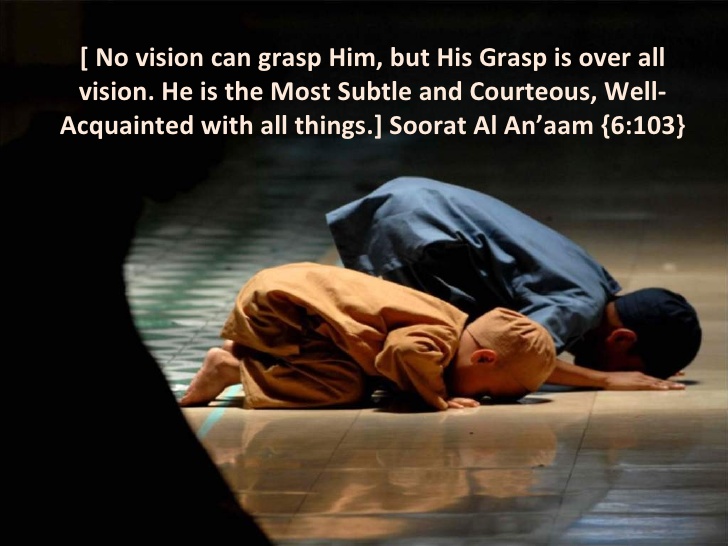 Allah, The Lord Of Creation, The Unique

Islam teaches that Allah is The Unique, The Single, the sole One deserving of worship. There is nothing like Him. Images of Allah cannot be drawn, and He is not compared to His creation. Allah is greater than anything we can imagine. Muslims repeat the words “Allahu Akbar” (Allah is the Greatest) many times a day to remind themselves of His Greatness and Ability over everything in existence. Allah says:

“It is never (as they consider it to be); rather they will be under a veil from their Lord (they will not be able to see their Sustainer on the Day of Judgment).” (Surah Al-Mutaffifeen – 15)

Everything in the Cosmos, every existence in the Cosmos is dependent upon His existence or His Being. Everything is derived from Him.  His existence can manifest/appear in limitless shapes and forms in consideration of the individual facts and natures of His creatures. All shapes and forms and bodies in this Cosmos are His creatures and the source and origin of these creatures is Allah’s Unity (ذاتِ الہى) who is real worshipable God. Allah says:

“Say ( O’Prophet ﷺ) Allah is one. Allah is independent. He does not have children. Nobody has given birth to him. Nobody can match Him or equal Him.”  (Al-Ikhlas – 1- 4)

“And your god is one God. There is no deity [worthy of worship] except Him, the Entirely Merciful, the Especially Merciful.” (Surat Al-Baqarah 2:163)

How do we understand the following verses?

It is in Quran – وَنَحْنُ أَقْرَبُ إِلَيْهِ مِنْ حَبْلِ الْوَرِيدِ  [And We are nearer to him than his jugular vein.] (Qaf – 16)

It is in Quran –  وَفِي أَنفُسِكُمْ ۚ أَفَلَا تُبْصِرُونَ [ And Allah is in your self, will you not then see. ] (Adh-Dhariyat – 21)

We are born, we grow old and die. Similar is the case with plants, trees and everything in this cosmos. Scientist says that the crust of the Sun is burning at a certain speed and one day it will turn into dark ash and vanish into oblivion.

“All that there is in the Cosmos shall vanish. The Countenance (standalone) of your Lord (by Himself) shall endure, the Lord of Majesty and Glory.” (Ar-Rahman – 26-27)

All things in this cosmos remain for a specific period and vanish. If they were all gods, they would have lived indefinitely. The entire cosmos is within the expanse of Divine Knowledge. Many things are manifest, many more will become manifest (come into external existence) at their appropriate time. Whatever it is, there is nothing outside Allah’s (سبحانه و تعالى) knowledge. Allah’s

(سبحانه و تعالى) knowledge is encircling us from all directions. It is in Quran –  وَكَانَ اللَّهُ بِكُلِّ شَيْءٍ مُّحِيطًا  [And Allah encompasses all the things.] (An-Nisa – 126)

Here are some facts about Allah (God):

We all were there in Allah’s (سبحانه و تعالى) knowledge as individual ‘facts’. When He wanted to bring us into external existence, He commanded ‘Be’, and there we were (born). Allah says:

“And not they appraised Allah (with) true appraisal, while the earth entirely (will be) in His Grip (on the) Day (of) the Resurrection, and the heavens (will be) folded in His Right Hand. Glory be to Him! And High is He above what they associate (with Him).” (Surah Az-Zumar: 39:67)

Our existence is the gift of Allah (سبحانه و تعالى). He has given us our life, He has provided us with our bodies as per the requirements of this physical world. We will die when our life span is over. Everything came out of His Being and it will eventually return there.